How is 'rm -rf /' able to delete all files in the system?

I haven't tried this command on Ubuntu (for obvious reasons) so I am not sure if Ubuntu will allow its execution. But it's famous for deleting everything. Just out of curiosity, what happens when the kernel and /bin are deleted? How does rm maintain a run time stack? How does rm manage to communicate with the file system and complete deletion? How does it communicate with hardware?

It doesn't matter that /bin/rm is deleted. It's only being run once and by that point it's all loaded in memory, as is everything else required to keep sending deletes to the filesystem and disk.

Sidebar/Update: Per David Hoelzer's answer (and mentioned in the comments), the inode the hardlink /bin/rm used to point to would remain right up until rm finished (because Linux holds in an open state) but that fact is irrelevant; the state of the disk doesn't matter at all.

The binary is loaded into memory before it is run. Even if you could manually destroy the rm disk data, it wouldn't affect or stop the deletion from completing (assuming you don't otherwise make the disk unavailable).

No idea what an inode or hardlink are? This is the answer where I worked it out.

Anyway, this is also why you can delete the package for the current kernel without the computer imploding. As long as you install a different version, it'll be able to boot up.

Again, this works because rm is only called once. The following would fail after /bin/rm died because it calls it once for every filename:

That said, find / -exec rm -rf {} + and find / -print0 | xargs -0 rm -rf would also both likely fail because they both have argument limits, meaning they would only delete a number of files before being called again. At some point along the journey, /bin/rm could expire (and be released) before the rest of the files were deleted. It's not guaranteed though. If /bin/ were the last directory entered, these methods could work.

I haven't tried this command on Ubuntu (for obvious reasons) so I am not sure if Ubuntu will allow its execution.

I did. rm -rf / --no-preserve-root was running in a root session opened directly on the machine, while I was also connected through ssh from another machine, using the root account as well.

What happens is that you start to get a lot of messages like: 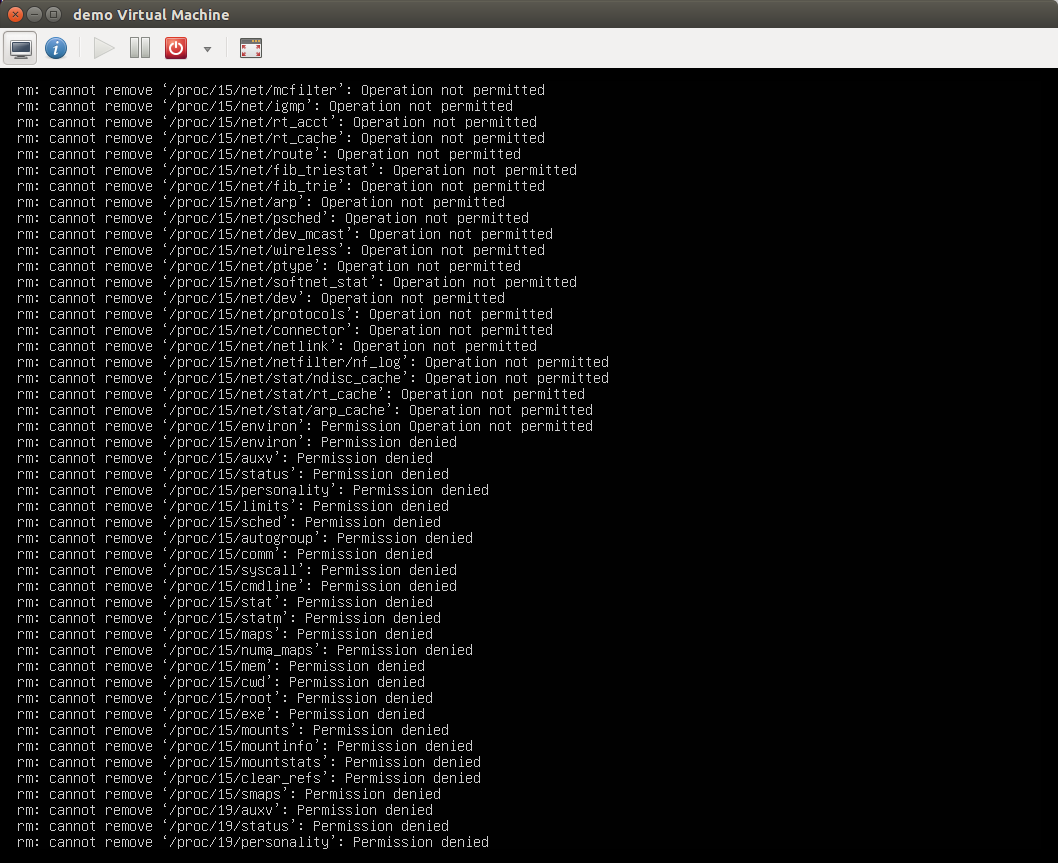 Surprisingly, ssh connection remained opened until the end of the operation. It's only when I closed the connection and tried to reopen it that a error appeared:

On the machine, four directories remain:

This means that there is not much left, and not much to do there. You can't ls (although when using Tab, the names of directories and files are still displayed). You can cd in different directories, and also echo stuff, but commands such as cat are not available any longer.

There is no sudo either.

shutdown -h now and reboot disappeared as well, so your only option seems to turn the machine down manually. Logout (exit) doesn't work, even if it shows a nice "logout" text.

Once you try to reboot the machine, you're presented with a nice GRUB error 15, and then, nothing happens, at which point you may start thinking that your rm might have done something bad to your system. 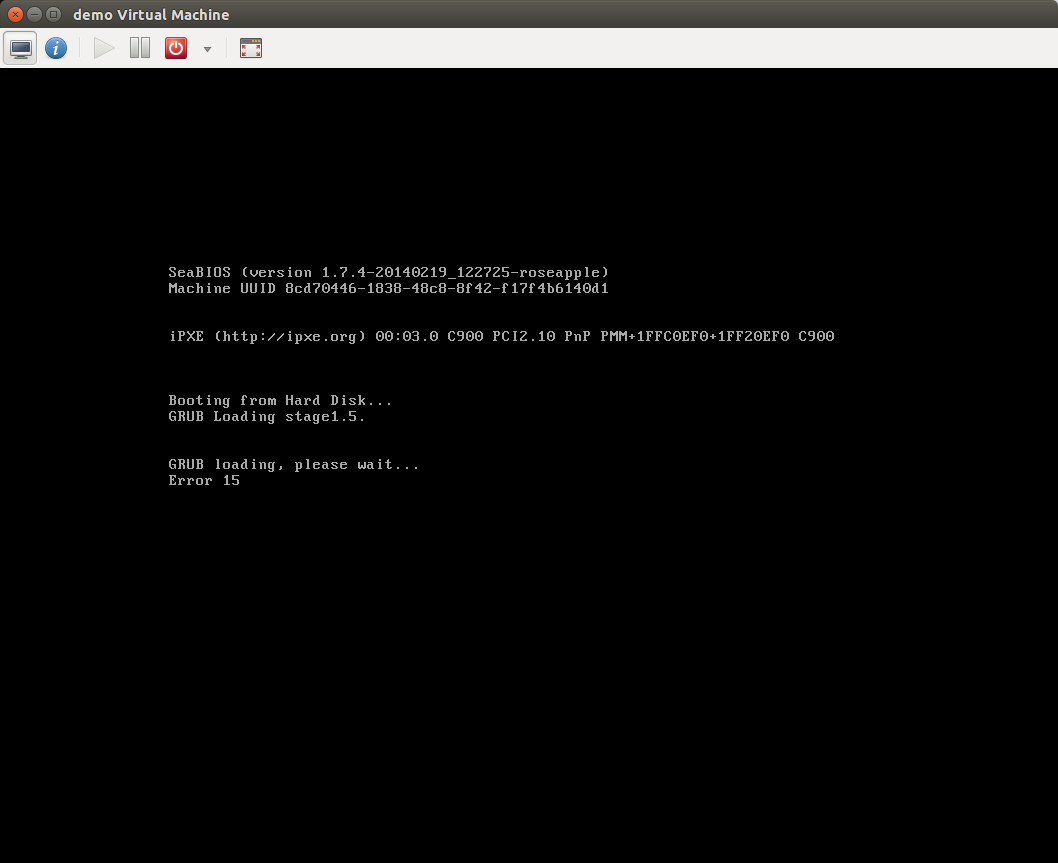 You can do it too

No, wait, don't do it on your machine!

What you can do instead is to run a virtual machine. VMs have a benefit of making experimentation really easy. Since you are using Ubuntu, you may be interested by vmbuilder. This is a tool which allows you to deploy virtual machines in a matter of minutes (the official documentation claims that it can be done "in about a minute", but the actual time, even on fast hardware, is more about two-three minutes.

Once the deployment ends, you have an environment you can play with. If you end up destroying it, it doesn't matter: you deploy the machine again, and two minutes later you can continue.

If you use software such as VMWare, you may also be interested in snapshots (note that the free VMWare Player doesn't have this feature; you have to purchase VMware Workstation). Note that Hyper-V is free and supports snapshots (but you have to run Windows).

The benefit of snapshots is that you can take one in a matter of milliseconds. Rolling back to a snapshot takes longer, but is often a matter of seconds. This makes experimentation even easier and faster.

This experimentation is not limited to the operating system itself. You can do all sort of things involving software. Got a suspicious application? Test it in a VM—if it's a virus, it won't do any harm. Want to test an operation on a database, given that it might affect the environment? Test it in a VM.

What if you did that on a real, non-test machine?

Bad things happen. Note that rm protects you from yourself: rm -rf / won't work: you need to use --no-preserve-root. Still, what if you actually achieved, by mistake, to remove everything?

rm only unlinks files, but the data is still there, on your hard disk. This makes it possible to recover it later (which is why you shouldn't just throw away your hard disks with sensitive data when they are not working any longer).

This means that you just have to have a spare PC with a hard drive enclosure to actually recover nearly all the files. The important thing is to avoid writing anything to the hard disk to recover: the data you write will overwrite the unlinked files.

As noted by the article in 200_success's comment, if you act smart, you can get the machine back even without a spare PC. If you care just about data, I wouldn't bother—recovering it with a spare PC is much easier.

The reason is that the file naming layer (what you see with ls) is really just for your convenience. The file system driver and kernel care only what the inode is. When a file is referenced by name, it is immediately translated into the inode which contains all of the metadata including the permissions, the data blocks on the disk, the owner ID, the group ID and the link count.

The link count is what really matters here. When you delete a file on a UNIX system, the actual system call is an unlink. What's happening under the hood is that the link count (the number of file names in the file naming layer) pointing at that inode is decremented. The file system knows that a file is deleted when the link count reaches zero.

When a file is deleted by rm it will also edit the directory file (yes, it's just a file that contains the file name and the inode in addition to a few other bits that are not important for this answer). However, it is the unlinking that actually frees the disk resources.

This leads to some other interesting effects. First, it is possible to have a file open whose link count is zero. This happens when rm -rf / deletes the entry for /bin/rm. The file is open (there is a file handle to it) but the inode is marked deleted (link count = 0). The disk resources will not be released and reused until the file handle closes.

Another interesting effect is what happens when you have an inode with a link count greater than zero but nothing in the file naming layer that points to it. This is, in a sense, a very well hidden file :). To get access to it you would have to use something low level to reference it by inode number rather than by name (because there isn't one) or edit a directory entry to point at the inode using a hex editor.

A third interesting effect is what happens if you reduce the link count to zero but point a directory entry at the inode anyway. I'll leave that to you to experiment with if you'd like. Clearly, though, these last two both lead to the file system being in an inconsistent state.

Previous answers are good, but I want to clarify one detail:

rm isn't just a command. It is a program that is found in PATH.

Therefore what happens when you execute is following:

Just for the sake of understanding how it works try installing LAMP on ubuntu (in Virtualbox), some script and PHP opcode cache, then call this evil command. Surprisingly (if you are lucky enough and your opcode cache won't notice php file deletion) you still can access php scripts from outside via apache webserver!

PS: this evil command even ran as root wont delete everything, it cannot delete some kernel privileged processes from /proc and cannot delete some of stuff from /dev devices which appear on your system as as files. In fact, root is not as almighty as we think, kernel on the other hand is.

PPS: Also as a second thought you also will still have files that were locked by another process at the time of deletion attempt.

Once everything is wiped from the harddrives the kernel is still working but sort of stuck as there are no devices and programs, commands, etc. left.

And it's true what Oli says, the command gets loaded/executed into memory and nothing will stop it unless you kill this process (of course, if the kill command is still present ^^).

Please be aware that if the system has selinux and selinux is in enforcing mode, and selinux's policies are set up properly; then nothing much will happen.

Selinux is mandatory access control, which means, among many thing, that the root user really has not much more power to destroy the system than any other user on the system.

Selinux is enforced in the kernel; you would have to compromise the kernel in order to get around it.

On a well designed system with good Selinux policies, root would not be able to do much on the system.

The later revisions of Android have Selinux enforcing just for this reason.

551
What is the difference between a hard link and a symbolic link?
20
How do I uninstall Ubuntu from a computer?
11
What happens when I use 'dd' to overwrite the disk from which Ubuntu is running?
3
Why app is still in use despite you have already deleted it

1
delete several files but leave the selected one
3
How to delete all the files/folders from the folder except few folders?
1
How to delete all files that contains " (2)" wildcards dont work
2
Delete files within all directories in a directory
24
How to delete all ._ files?
6
'rm' (delete) thousands of files selectively