Does package manager remove dependencies when original package is removed?

I am new to xubunutu and linux, my question is about how dependencies are removed from the system when we uninstall a package that caused them to install.

so consider this case that I install a package called test.

However this often gives a message saying following new packages will be installed as well. Assuming it installs 50 other packages as dependencies and continue to accept and install them.

Now later on I install other packages as well, assume if the newly installed packages use 10 out of those dependencies installed earlier.

Will it automatically workout 50 - 10 packages and remove them ?

or will it not remove any of the 50 packages ?

or will it remove all the 50 packages that were installed with test package?

I believe it depends on the package. Obviously, some dependencies are also dependencies for other packages, so those will stay installed.

Now, I don't have a super credible source (no Debian or Ubuntu documentation) currently (searching now.) But, what I do have is what I get in the terminal when I try to remove a package (shutter) in my case: 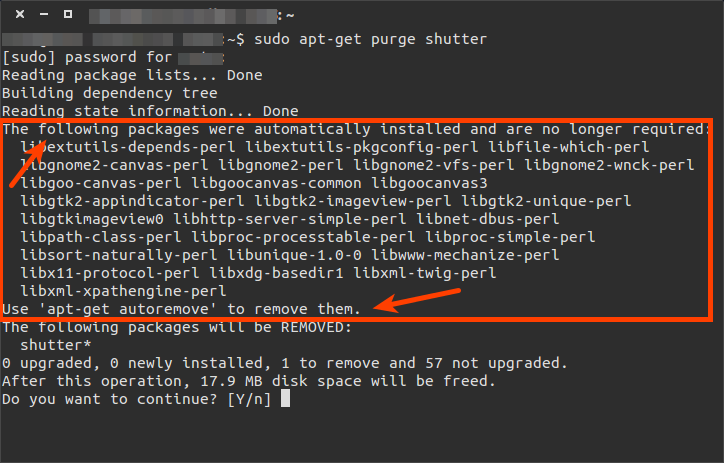 Obviously, there would be a bunch of dependencies left over that would have to be manually removed.

From the man page for apt-get:

autoremove is used to remove packages that were automatically installed to satisfy dependencies for other packages and are now no longer needed.

Hope this helped! I'll look for a more credible source just to augment my answer.

To remove package test from your system, you would run:

To remove package test and its configuration files from your system, you would run:

Or you could use synaptic package manager to the same

Not the answer you're looking for? Browse other questions tagged apt uninstall dependencies or ask your own question.