No ethernet connection only wifi

I'm providing some of the terminal tests I done for a Dell latitude D520 with Ubuntu 12.04. Please any help will be appreciated.

Okay, from what you have listed, the problem appears to be your file /etc/NetworkManager/NetworkManager.conf. Open a terminal and execute the following commands:

Make sure the file says the following, nothing more and nothing less:

and make sure that file has only these contents:

Finally, execute the following commands and then connect the ethernet cable and it should automatically detect and switch to the wired connection:

To explain: You do not want the network as "managed" because you want to use "auto" instead. Also, you had the default device set to wireless for some reason. Both of those together along with the "no-auto-..." flag basically disabled your auto ethernet.

Normally, however, when the system has a wired and a wireless connection, the wired connection will always be favored and used even when they are both connected because eth0 should be the default device by default.

Unplug in your ethernet cable and run the following commands from an open terminal:

Plug the ethernet cable in. Click on the network-manager icon on your desktop panel to open the dropdown menu. Then, click on "Auto eth0" 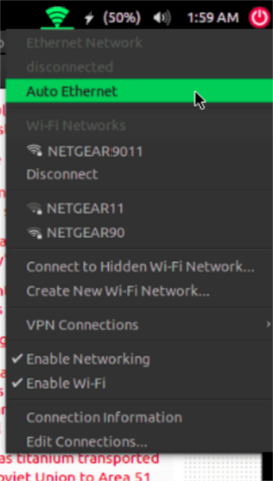 If you see some message similar to "device is not managed" or "device is managed" please let me know and I'll post instructions on how to get around that.

If the network doesn't come up like it's supposed to after plugging in the ethernet cable, run the following command to refresh network-manager:

Or, run these commands to unload and reload the driver:

and it should show what module is using b44. Use

followed by the module name you wish to disable before pressing enter.

to load the driver again.

Make sure your firewall is not blocking ports 67, 68, or 53 (dhcp, dhcp, and dns respectively). If you have not done anything to explicitly block these ports they are most likely not blocked as you would've had to have set a rule yourself to block them.

2
Trying to configure two ethernet adapters - Failed to bring up eth1
2
Wifi not working on Lenovo z570 Ubuntu 12.04
3
How to do bonding in ubuntu 12.04 in vmware workstation?
6
Ethernet connection not working after installing Ubuntu 14.04 LTS
1
No internet access via ethernet, while wifi works (82579lm, ubuntu 14.04)
2
Dual NIC not working