Wired internet works fine in Windows 7 Pro and "Try Ubuntu" 14.04.2 LTS booted from disk and in the installed Ubuntu, but stops working after booting Windows and then Ubuntu. I've seen numerous different problems and solutions to wired internet not working in Ubuntu 14.04, but none of them seem to apply to this case. I updated the NIC driver e1000e to the latest version (3.1.0.2), but this did not solve the problem. Again here is the pattern:

I've tried this sequence a few times and it is consistent. What to check?

Output of ifconfig below:

Also bothered by this issue for a week before finally finding the solution.

The problem is caused by that, the Windows driver configures the ethernet card to a specific state while Ubuntu is trying to initialize the card from fresh and fails.

This problem seems to be some sort of low level setting that Windows can leave on the network card that Ubuntu can't restart correctly. I had the same problem with the Intel i217-V networking chip. The solution I have is that on Ubuntu start-up, I reset the chip. So now works even if closed down on Windows. You'll need to find which PCI device is your card and then reset it as below.

To list PCI devices enter lspci in the terminal, and and you'll get a list -look for the line with your Ethernet controller. mine shown below:

So I added to /etc/rc.local

(source – I couldn't understand the script, and this seemed simpler.)

Wired network does not work in Ubuntu when I restart from MS Windows7 and then start Ubuntu.

After using MS Windows 7 I have to shutdown first before using Ubuntu.

Some settings in Windows may prohibit internet connecting in Ubuntu. I disable WOL (wake-on-lan) of power management in Wiondws 8 and then it works in Ubuntu.

at a recent case this happened also after an update to kernel 4.4.0.72 who made the bug of after booting from a Windows 10 dual-boot, the wired network at next Ubuntu 16.04 boot did not work, even with all settings ok;

using the older kernel at boot made it work without any changes, at this case 4.4.0.71 was Ok, going from the boot "Advanced options for Ubuntu" menu entry.

I could then fix it by editing /etc/grub.d/10_linux_proxy, deleting 4.4.0.72 files from /boot and using grub-mkconfig and update-grub

this approach however did not worked with other PC with the same bug, who had kernel 4.4.0.21 before 0.72 updated; so this is just informative.

on an Ubuntu 16.04 with wired ethernet locked after coming from Windows 10 dual-boot, the following script/steps at command-line set it working again:

this script author is jnko from an article at bbs.archlinux.org/viewtopic.php?pid=1575719

then after running it:

please wait about 30 seconds after this last step

in case of desperation, just shutdown your system, and remove for a few seconds the electric power plug; not a joke: this will release the lock windows 10 make to the ethernet hardware, and Ubuntu will have net again.

also, if you remember when at Windows 10, disabling the ethernet interface before rebooting will also avoid this lock at next Linux boot.

while I could not believe this at first, it is true: this bug only happens when one restarts Windows to Linux; if it is done a shutdown at Linux, or Windows is ended down to shutdown the PC, this does not happen. 8-]

I was also having this issue that started with a new network router dual booting Windows 7 and Kubuntu 18.04.

For me, it was a DHCP issue, and the easiest solution was to have Kubuntu use a cloned MAC address different than the one windows uses.

Should be an option for your network connection under network settings.

In Kubuntu, search for connections:

This should do the trick.

Maybe this could solve your problem

The problem is described here: https://sites.google.com/site/easylinuxtipsproject/internet#TOC-No-wired-or-wireless-internet-on-a-dual-boot-computer

This may be due to a flaw in Windows, which can be repaired easily.

If you have a dual bootable PC with Windows, and you've just used Windows, you may not get an IP address after a reboot in Linux. And so no internet connection.

This has the following reason: every network card has a unique MAC address. This address is ingrained in your NIC. The DHCP server in your router remembers this MAC address.

When you access the internet in Windows and then reboot in Linux, in many cases you'll get no IP address from the DHCP server in your router. Because this server will recall that it previously issued an IP address for that very same MAC address, and won't issue a new one.

Tip: Did you forget to force Windows to release the IP address, and you don't want to boot Windows to do it as yet? Then simply boot Ubuntu or Linux Mint twice in a row. After the second boot of Ubuntu or Mint you can probably connect.

A. Manual method 1. Open a DOS window in Windows

(note the space between ipconfig and /release)

B. Semi-automatic method By means of a shortcut on your desktop, you can apply a semi-automatic solution for this.

As I said, Linux releases the IP address by default on shutdown. So a reboot from Linux into Windows causes no problems.

ccy's suggestion to turn off "Wake-on-LAN" works. We use "Wake-on-LAN", so we adopted ccy's solution after finding a workaround. Step 3 of Zhou's solution has the same effect, of course. Otherwise, ...

Upgrading to the latest driver from Intel didn't make any difference for us, as the last 3 versions since 2015 seem to work the same.

I had the same trouble - adding nmcli c up YOURSSID to my startup applications solved it for me.

So I changed the MAC Address to a random number using Windows, in
Device Manager → Adapter Settings → Advanced. 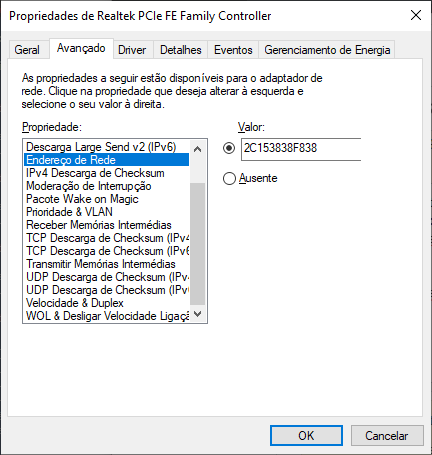 Try to unplug energy cable when computer is on (do not reboot or shutdown) leave it without energy like for a minute. Boot Ubuntu, if that works, this is your issue https://bbs.archlinux.org/viewtopic.php?pid=1575719 It worked for me.

Of course energy cut is not the solution but an easy way to check if it was a WOL issue as described in the link.

The only thing you need to do is remove the power cable of your system unit and plug it again after 30secs then turn on your computer. that's all.

4
Not able to connect to local network
4
Completely disappeared Wireless
1
Can't connect to wired or wireless network with Dell D520
3
14.04 no internet connection when I up the bridge interface (for LXC container)
0
ubuntu 16.04 laptop connects to wireless router but not always to network
2
Dual NIC not working