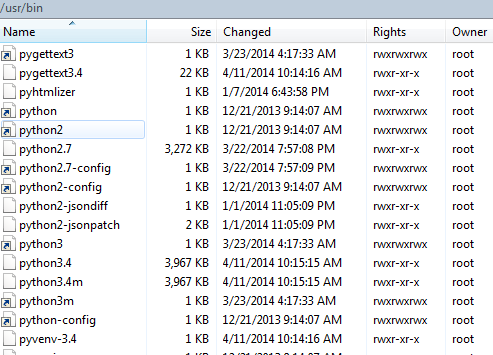 I am working with Ubuntu 14.4 Trusty Tahr LTS on EC2. I want to use the Python 3.4.0 interpreter which is installed by default. I want to be able to be able to add git repositories to be accessed by python3.4.

There is a python library used to interact with Git repositories

It can be used in Fetching Remote Git Repo with Python, e.g..

But I think you will find Git to be Python version independent, and that possibly you want to associate Python code, files and extensions with Python 3.4 rather than 2.7, and that would be via mime.types

How is it determined which application is to open a file of specific mime-type?

For example, I use Idlex as an IDE. I've added text/x-python=idlex3.desktop to the ~/.local/share/applications/mimeapps.list file. Now, double clicking on a Python file opens that file in the IDE to be looked at, edited, and/or run.

32
How to set python 3 as default interpreter in Ubuntu 14.04
5
How is it determined which application is to open a file of specific mime-type?

2
migrate git repositories
1
Why my kernel is not the latest for 14.04?
3
Fatal Python error: Py_Initialize: Unable to get the locale encoding
1
Migrating git repositories to a new server
2
Can I run a python package with snap on Ubuntu Core?
0
Restoring [K]Ubuntu 20.04 after removing Python with apt-get