How to connect wifi network from raspberry pi 2 (snappy)

I've set up new raspberry pi 2 with snappy core. And I couldn't find how to connect wifi network from snappy terminal.

My wifi dongle working correctly but there is no iwconfig in snappy core. Wlist not found too. Anyone can help me?

So I just received my Raspberry Pi 3 Model B in the mail and installed Ubuntu Snappy Core 16 in the recommended way. I performed the initial setup via HDMI and usb keyboard, ethernet, & DHCP. Then I created my ssh connection over ethernet and disconnected the monitor and keyboard. From there, I wanted to connect my device to WiFi and stumbled upon this post.

I like to try things without extra installations or workarounds, so I consulted Installation Tips as recommended above and saw that WPA_Supplicant was supposed to be pre-installed. With very little meddling and less effort than the Tips suggested, I found that you can configure the wifi by simply adding a config file consisting of four lines to the default location searched by wpa_supplicant and nothing else. Though it was asked a while ago about a Raspberry Pi 2 I see from recent comments that it might still be relevant and it was so simple I am inclined to share.

I know this answer looks long, but it is very simple and detailed with pictures. Anyone who has a basic knowledge of Terminal and was able to set up their raspberry Pi initially will be able to follow it.

My tutorial begins from the point of having an ssh connection via ethernet, which can be achieved by following the instructions at Ubuntu Core Get Started Raspberry Pi 2/3.

Then type wpa_supplicant and you will see that it does not need to be installed as it is pre-built into Snappy Core. As you'll see in the below images, just running wpa_supplicant will return a lot of options, but notice the last line:

What this tells you is first the Driver, then the Interface, then the location that it is looking for the interface file: -c/etc/wpa_supplicant.conf 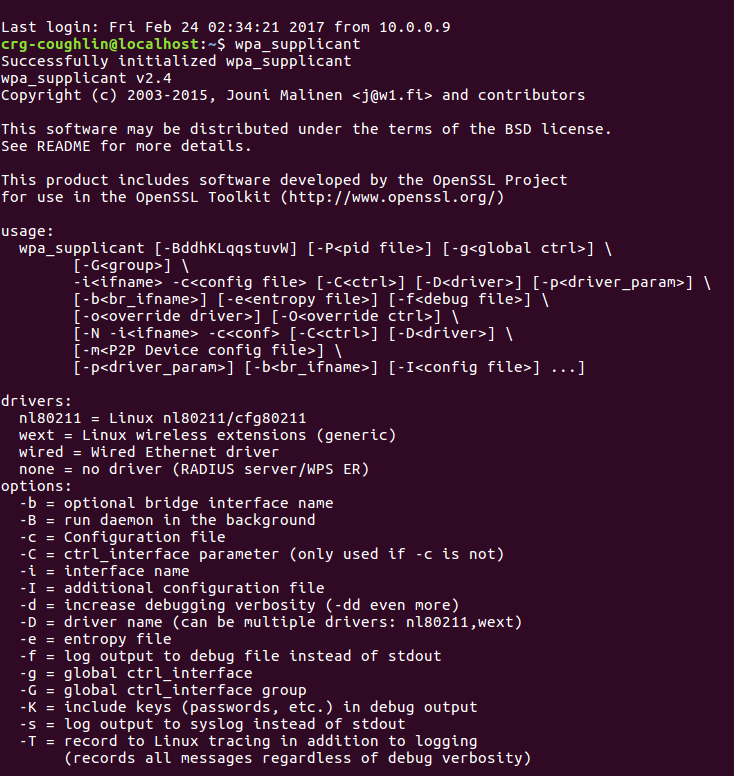 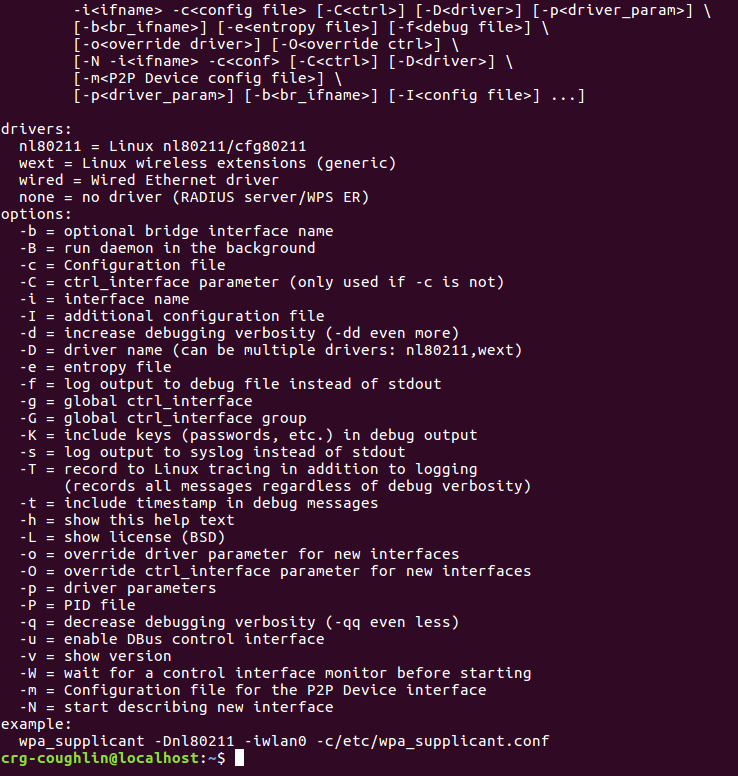 Now that I knew where the configuration file needed to be, I shutdown the Raspberry Pi with sudo shutdown -P now and once it shutdown; disconnected the power and inserted the SD into a linux box with Fedora. Somehow the file system shows differently so you'll find the location where wpa_supplicant.conf needs to be location is at writable/system-data/etc and the SD card mounted in /run/media/cregger/ for me, so you'll see my file path is /run/media/cregger/writable/system-data/etc/. 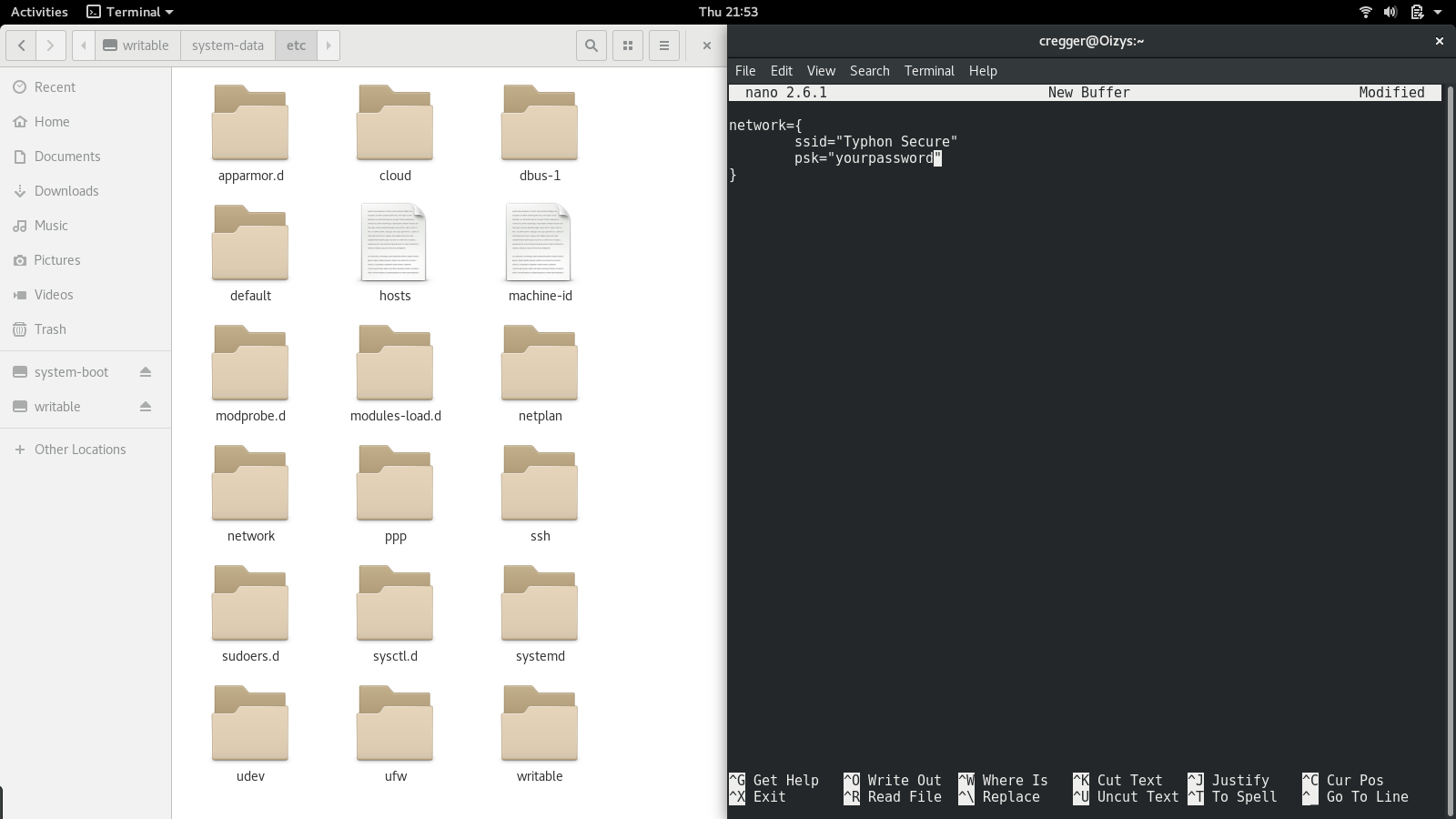 I used nano to create a new file called "wpa_supplicant.conf" with the following four lines:

Note that this works for hidden networks with no extra configuration. My network has a hidden SSID and I changed nothing. It has WPA-PSK 2 security; pretty standard fare.

You'll notice that I saved it to the desktop. I then copied it to the proper location with terminal as it is owned by root.

I can now ssh via either LAN or WLAN 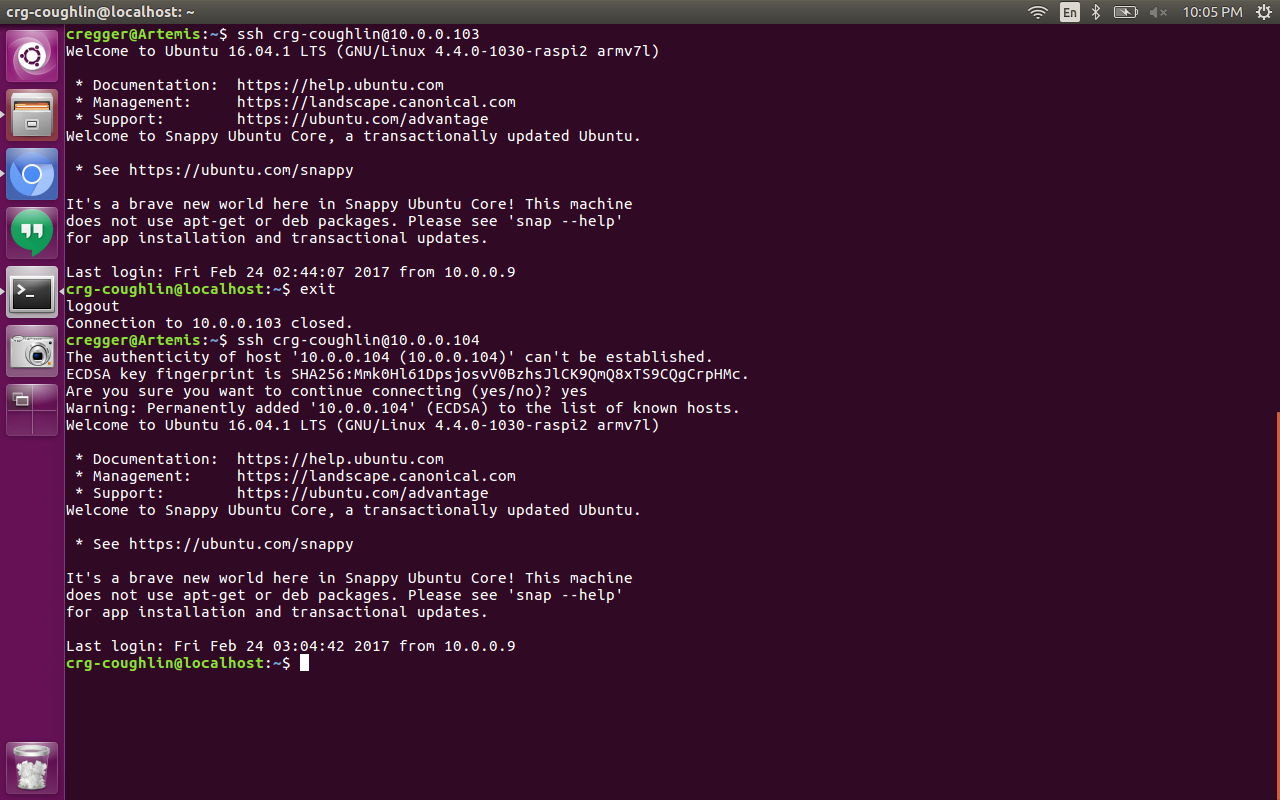 I know this was long, but I hope it was helpful in helping you to keep from mucking up your FS and installing a bunch of needless applications.

You can install dpkg of the necessary wifi tools

Install first from another computer a few tools

then I navigated to /media/external and ran the command

then added this file to /etc/network/interfaces.d/wlan0

then i rebooted for the effects to take place

Bonus: for snappy to work remember to set date

As for me, I had the raspberry connected to ethernet so I didn't need to download deb files individually.

Also, the official guide (claimed by @AnthonyWong to be here: http://developer.ubuntu.com/en/snappy/start/installation-tips ) didn't work for me because it had some fundamental things missing (allow-hotplug line). Plus it's better to centralize all config in just one file (not two, as this guide encourages, which even tells you to place one in some random /home/ubuntu location...).

So, I made this little script that should set everything up for you:

After that, disconnect the ethernet cable, reboot the machine (e.g. via sudo reboot), and you're dandy.

NB: If you prefer static IP instead of relying on DHCP (e.g. for port mapping purposes...):

Not the answer you're looking for? Browse other questions tagged raspberrypi ubuntu-core or ask your own question.

5
Ubuntu-Core Snappy ssl-certificate error
0
How to set a permanent IP address on "Snappy" Ubuntu Core
2
Snappy on Raspberry Pi 2 failing to boot
4
start GUI interface from command line in snappy ubuntu
3
How to create snappy nodejs web application
1
Network configuration timed out in Ubuntu Core 16 for Wifi adapter on RPI3
10
Connecting to new Wifi network
2
How to use h264_mmal hardware decoder in RaspberryPi 3 in Snappy Ubuntu Core?
2
Help: Unable to connect to 5G Wifi on raspberry pi 4 using ubuntu server 18.04
0
How to connect Raspberry Pi 4 to a hidden WiFi network on Ubuntu Server 20.04?