How to use SSH (ssh & rsync commands)?

How can I SSH with a remote server so I can browse files and edit them? I have a username and password to use.

SSH comes by default in all Ubuntu versions so you save in having to install it (+1 for having it already there ;) )

Except of course in the case where you want a SSH server for your Ubuntu server. In that case you would

which should make your computer/server ready to be a ssh server.

To use it is fairly easy:

ssh USER@SITE for example if my username is cyrex and the site is ubuntu.com then you would do this:

Now lets say you want to copy a file called bubblegum.txt from your computer to your ubuntu site and want to leave that file at the /var/www folder in the ubuntu site. you can do this (assuming your user has enough permissions in the ubuntu site) by using SSH's Brother, SCP (Which also comes by default in Ubuntu):

Notice the : between the USER@SITE and the folder where you want to copy it. It is the one that separates both elements.

Now lets say you are uploading some huge file with scp and then the worst happens, the world explodes. How can you keep on uploading that file to the server. Then you got SCP's big brother, rsync (Comes by default in Ubuntu). In many ways scp and rsync do the same thing but here are some big differences between them:

Anyway, in the case scp could not upload the entire file this is where rsync comes in to rescue. (Thanks to Marco Ceppi for the tip. Vote up his comment if you like cats.. and/or dogs)

Lets say you did the upload mention above from scp and it got to 60%. How can you continue in that 60% without losing your times worth for the upload. You would do this:

This tells rsync to show the progress in a nice human readable way with the --progress flag. It also tells rsync to check and continue from where the file bubblegum.txt got to with the --partial flag. You can also simplify the amount to write with the -P parameter which is the same as --progress and --partial, so the above would look like this:

You can even CTRL+C the upload and resume it by doing the command from rsync above. Very cool to have the ability to resume something anytime any amount of times.

For more info for rsync which comes by default with Ubuntu you can type the following terminal commands:

Now to specify a port for SSH. To specify it you can do it like this:

To configure it just open in the server the file ssh_config like this: nano /etc/ssh/ssh_config and change the line that says # port 22 to another port. Also remember to remove the comment from that line. It should look like this: port 1234 in the case for the example above.

NOTE - You can also use SSH from GUI tools like filezilla which offer the option to use ssh instead of ftp. ssh can also be accessed from within the Ubuntu menu: 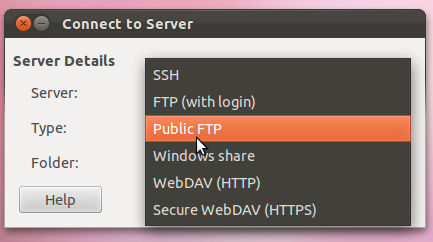 For more information about SSH you can use one of the following commands in console in your Ubuntu box:

If you want to browse the server through Nautilus like you do with files on your local machine:

The folder should open right up for you.

You could use sshfs to mount a remote directory to your local filesystem.

To add it to your /etc/fstab,

Note that you have to change $USER to your login name when editing fstab, but it is not necessary when typing commands (the shell does it for you in that case).

Assuming the ssh server is already set up, open a terminal and type:

You'll be prompted for your password; just enter it. If you need a port number, add -p PORTNUM.

Enter your password, and you are in. From there, it's just like a regular terminal, except you have no GUI.

Note, you can add the '-X' option, and if your server has an X server configured, you can run GUI programs. Just type their name if you added -X and it will launch a GUI window.

Now, you will probably want to set up passwordless login. If you have no key already, type ssh-keygen and just hit enter to all the defaults. Then do ssh-copy-id MYUSER@mysite.com. Once that's done, just type in ssh MYUSER@mysite.com and you don't have to enter your password!

If your username is the same as your Laptop's username, you do not need MYUSER@. You can just do ssh mysite.com. You can also use the -l MYUSER option instead of MYUSER@

If you want a GUI, Nautilus can do this. File -> Connect to Server -> [select 'SSH', then fill in login details] -> Connect.

If you want to just copy a single file, use scp [secure copy].
scp MYUSER@mysite.com:path/to/file.dat ./

This copies the file "~/path/to/file.dat" to your current directory. Note, if you do not have a slash or tilde after the :, it will act like you are in your home directory [~/]. If you want to upload, scp ./local_file.dat MYUSER@mysite.com: That will put it in your home dir.

Not the answer you're looking for? Browse other questions tagged ssh remote or ask your own question.

1
How can i access others machine terminal through my machine?
1
How to enable SSH?
0
connection refused when I'm transfering data from Dell laptop to Lenovo laptop
27
How to make a home server using Ubuntu desktop?
2
Mount drive on remote machine
0
How to install many softwares in one go and replicate Ubuntu?

20
copy with ssh with port other than 22
3
Multiple Connections through SSH
3
Rsync behind a proxy
3
How can I use SSH aliases with rsync?
0
Does rsync over ssh require use of UDP?
2
How to use ssh key in gftp?
3
How to see remote SSH connections on my server?
0
How to install ssh private key?