I'm trying to use the substitute command in VIm but don't get the result I excpect: I'm editing an html file, and for example I'd like to replace all "é" characters by the é code (yes it's in French and yes I really like to complicate my life :).

Then I use this command: :s /é /&eacute; /gc to replace all é by é in the line with asking for confirmation. This time it says the pattern hasn't been found, but when it finds it, it adds and don't replace, so the result is that the word "piétons" is replaced by the word "piéétons" ... the character é isn't deleted.

Can someone explain what I'm doing wrong please? 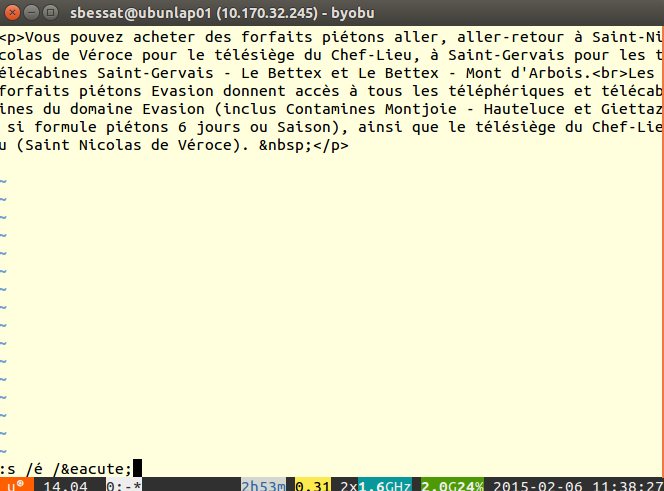 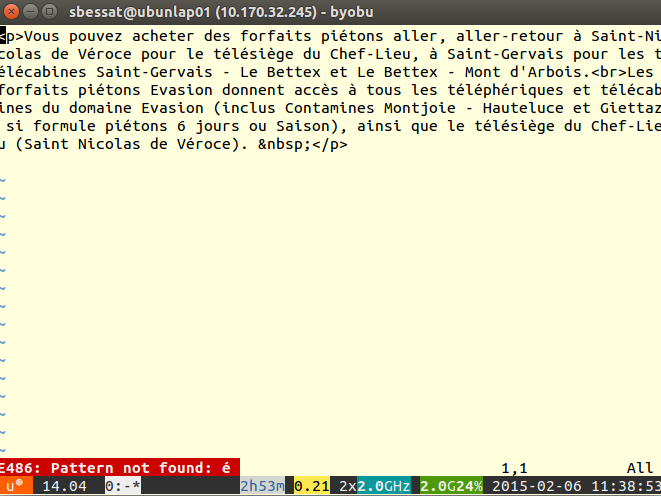 Notice, I don't know if it is desired, but your substitution only replaces é if it is followed by a space. To replace all é's, use that command (without the spaces):

... or install recode and

Not the answer you're looking for? Browse other questions tagged 14.04 command-line vim or ask your own question.

69
Shell does not show typed in commands, “reset” works, but what happened?
8
vim: command not found
5
vim command does not work
1
VIM in gnome-terminal keeps printing weird 001B character
1
convert txt file to csv seperated with tabs
0
What does this vim command do?
11
Is it possible with Gedit or the command line to modify every fourth line of a text file?
0
No “plugin” command VIM
1
vim - running dd range command using command line