How do I permanently disable my touchscreen on Sony VAIO

It's working great only I noticed that the touchscreen (which is enabled by default) affects my battery life. I don't use it, so now I usually turn it off after startup by using the following command:

(9 is the number assigned to my touchscreen)

This, however, doesn't mean the touchscreen is disabled by default; I have to repeat this action each time I start up my computer.

To disable the drivers I have tried the following, from a different thread:

2.Add Option "Ignore" "on" to the end of touchscreen section

so that doesn't work, and neither do the other suggestions made by other users, unfortunately (found here Disabling touch screen only temporarily and here: http://ubuntuforums.org/showthread.php?t=1600818)

Does anyone have any ideas on how to permanently disable the touchscreen?

One option would be to have the xinput disable 9 command run automatically at every boot.

You can do this with the Startup Applications app installed by default in Ubuntu. Open the app and click the Add button to add a new Startup program.

Once you have this done simply click Add and it will take effect next time you reboot.

Note: This will only run once you have logged into the user account from which you created it. If there are other accounts that you need to disable the touchscreen for you can repeat this process for each user account or you can follow the instructions here to enable it for every user. 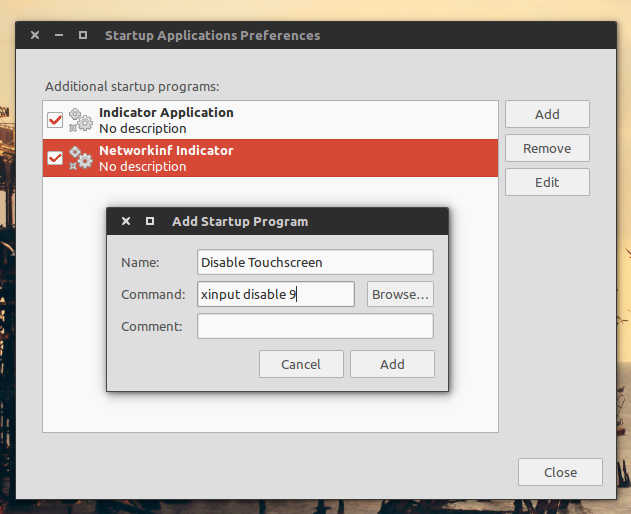 For the people spewing out this suggestion to other touchscreen users please don't Edit /usr/share/X11/xorg.conf.d/10-evdev.conf --->"Ignore""on" Is WRONG! I've seen this on other posts as well.

If you want to put that command in you will blow up xserver! You won't get a screen at all, some systems will spit out an error during boot with a mismatch as well.

So follow the directions That Merri left, not the other suggestions. find out what your touchscreen is called via terminal

and then adding the startup script. In Ubuntu you can type in startup applications in the dash. Then click on ADD and put your script in the "Command" section then click save, you can give it a title if you like so you know for next time what it does.

This would be the easiest method, I don't know why people put stuff in these forums and don't even have a touchscreen of their own, or at least it sounds like they don't.

My xserver blew up every time I messed with that xorg file. I'm running a Dell Inspiron laptop 5547 model, Tried this on Ubuntu 15.10 and Linux Mint 17.

Changing your xorg file definitely will kill your system.

Edit file the file with

Change MatchIsTouchscreen from "on" to "off" to look like this

Save, name and exit nano

Touchscreen is disabled and no longer detected in xinput list.

You need administrator privileges, in order to edit such files. Your first command should be sudo gedit /usr/share/X11/xorg.conf.d/10-evdev.conf and you will be prompted to enter the root password. Then carry on as you're suggested and you will be able to disable your touch screen.

Not the answer you're looking for? Browse other questions tagged vaio touchscreen sony or ask your own question.

9
Disabling touch screen only temporarily
2
Creating startup program for all users 12.04 - only working for 1 user
1
How to disable a touchscreen
1
xinput listing changes, intermittently unable to disable touchscreen