When I go to websites using Flash in Firefox, I get this warning:

This plugin is vulnerable and it should be updated.

There isn’t a software package called “adobe-flashplugin” in your current software sources.

flashplugin-installer is already the newest version.

So how can I update?

Several serious security vulnerabilities were found in Adobe's flash plugin with exploits known to be in the wild. Because of the critical nature of the vulnerabilities, the Mozilla foundation decided to block this version of the plugin. Unfortunately, at the time of the blocklist, only the PPAPI version of the plugin (as used by chromium) was available and Firefox users found the NPAPI plugin was blocked via Firefox's click-through security mechanism.

You should be able to update/install it using:

or, it should also be updated if you use:

Flash is currently being blocked in Firefox by default in all versions: 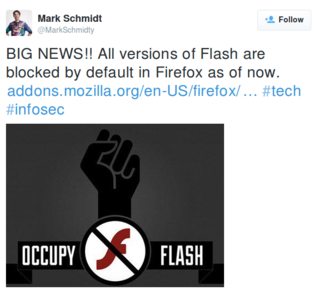 Anyway, to fix it:

Please only do this if desperate - youtube and other sites now have a option to use HTML5, which should be used in preference to this)

This is due to the unfixed security issues in the Adobe Flash plugin, which can be widely exploited by attackers.

The flash plugin in general is very insecure and should be replaced - apparently Adobe and others should be reducing the use of Flash to replace it with HTML5, WebGL and other open standards. One of the reasons (other than they couldn't be asked...) that the Linux version of Flash is stuck at 11.2 (the version for linux gets security backports for 5 years from release) is due to the supposed roadmap with which Adobe will remove Flash support globally (supposedly).

I noticed that all versions of adobe flash (current version on all operating systems) is blocked now from automatically running. what I did is with firefox closed, open up the home foldier, show hidden files then go to .mozilla/firefox/*.default and edit the pluginreg.dat file search for your version (mine was 11.2.202.481 located under the entry /usr/lib/flashplugin-installer/libflashplayer.so:$ in the file) I changed the 11 to 19 and no more annoying message from firefox. now firefox thinks my version is 19.2.202.481

The problem is explained here: https://blocklist.addons.mozilla.org/en-US/firefox/blocked/p796 The plugin for Linux is not safe :(

Not the answer you're looking for? Browse other questions tagged flash or ask your own question.

0
How does Ubuntu control plugins
-6
FLASH PLAYER won't upgrade
22
Adobe will stop releasing new versions of Flash - what will happen to flash support in Ubuntu?

1
Flash refusing to render on Ubuntu despite a successful install
5
'adobe-flashplugin conflicts with flashplugin-downloader' error while trying to install adobe-flashplugin
1
Only “Vulnerable” Flash Player version works
1
Having problems updating my flash player
56
Adobe Flash Plugin is vulnerable/outdated in 14.04 but there is no update in Firefox
0
adobe flash player update
0
Shockwave Flash 17.0 for Linux
21
“Shockwave Flash is known to be vulnerable” warning