What's the difference between PREROUTING and FORWARD in iptables?

I am trying to understand how this system works and I have problems to understand the difference between using NAT PREROUTING or filter FORWARD. From what I understand, the PREROUTE can send the packet to another server, avoiding the filter. If NAT can handle this via PREROUTE, what is the purpose of having a FORWARD rule in the filter?

The filter table is mainly used for filtering packets. We can match packets and filter them in whatever way we want. This is the place that we actually take action against packets and look at what they contain and DROP or /ACCEPT them, depending on their content. Of course we may also do prior filtering; however, this particular table is the place for which filtering was designed.

You should use nat's PREROUTING only to change the destination address of the packets and filter's FORWARD only for filtering (dropping/accepting packets). 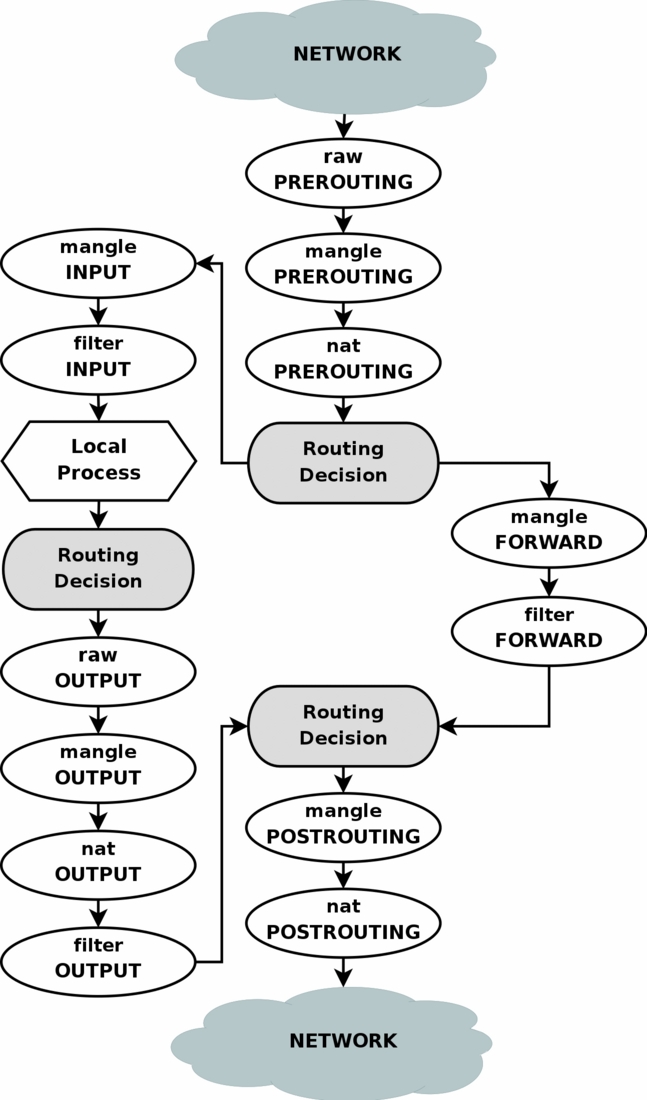 Packets may be destined for the local machine, but the destination address may be changed within the PREROUTING chain by doing NAT. Since this takes place before the first routing decision, the packet will be looked upon after this change. Because of this, the routing may be changed before the routing decision is done. Do note, that all packets will be going through one or the other path in this image. If you DNAT a packet back to the same network that it came from, it will still travel through the rest of the chains until it is back out on the network.

PREROUTING: This chain is used to make any routing related decisions before (PRE) sending any packets. Always remember that in PREROUTING/POSTROUTING i.e. NAT table the ACCEPT/DROP/REJECT etc targets of the default FILTER table will not work. The NAT table is only used for taking routing decisions. You should use PREROUTING when taking any routing decisions i.e. the decisions which are needed to be taken before the packet will start traversing through the network. Here is an example, we are redirecting any traffic that just reached the server on port 80 to the port 8080:

FORWARD: As the name suggests, The FORWARD chain of FILTER table is used to forward the packets from a source to a destination, here the source and destination are two different hosts. So, as you can imagine FORWARD rules are basically used on servers where one host is sending/receiving traffic from another host via the server. When the packet is generated from the server the chain is OUTPUT i.e. the traffic is going out from itself whereas INPUT chain means the the packets are meant for the server itself only. Here is an example of FORWARD chain where any TCP traffic received on port 80 on interface eth0 meant for the host 192.168.0.4 will be accepted and forwarded to 192.168.0.4:

Not the answer you're looking for? Browse other questions tagged networking iptables nat or ask your own question.

0
the packet flow from a network interface to a local process? help!
0
IP tables as a basic proxy not functioning as expected
2
ubuntu iptables NAT & Router & Port Forwarding
0
Can not forward port
0
DNAT iptable rule does not create session
1
Can someone explain interactions between iptables, nftables and bpf?
0
iptables - use ubuntu as router