How can I swap Left Meta for an arbitrary key (preferably using xkb)?

I'm trying to counter my "emacs pinky" by putting some keys in more accesible places. I've already switched Ctrl for Caps Lock, which was a no brainer, putting a setxkbmap command to the Startup Applications list.

I've decided that I should also move the left Meta/Super/Windows key, that I tend to use a lot and is not very comfortable to access in my keyboard. The best key to make its function would be the one above the Tab, that in american keyboards makes the ~ symbol (and in the ES keyboard makes the Masculine/Femenine symbols and the backslash, and ). 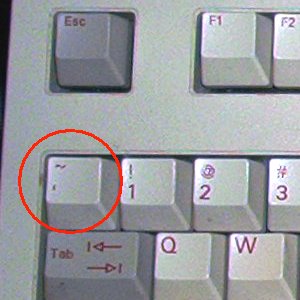 I've figured out, looking at /usr/share/X11/xkb/symbols/es, that its code is TLDE:

But how can I swap that key with the left meta key?? I can't find that key's code in xkb, and I've no idea how I can make swaps for which there is not an option in /usr/share/X11/xkb/rules/evdev.lst. Its code is LWIN (as I saw/usr/share/X11/xkb/symbols/pc):

Were it relevant, I'm currently running XFCE4, but I'd like a portable solution so I can take it with me if I change DE (I use Unity in other computers); I'm also using an spanish keyboard.

Added: My current config; note I have swapcaps enabled, it's enabled from a setxkbmap I added to the startup applications.

I tried changing the layouts in x11/xkb.

It made no difference, they show the same behabiour.

Another think I've thought about is switching the keycodes in /usr/share/X11/xkb/keycodes/evdev. Couldn't get it to work though.

I didn't want to use xmodmap, but... it does the trick:

Note that this responds to my keyboard layout, you should check for yours. Also, now the backslash is made with Shift instead of Alt-Gr like before, but didn't make me too long to get used to that.