Drop Down Firefox in ubuntu

I doubt there is a version currently available that can make Firefox drop down, as that would require a patch or rather large amount of work on the extension.

However, an alternative that so you can open Firefox quicker would be to use the MinimizedToTrayRevived extension. This means that instead of closing Firefox minimizes to tray instead. In Gnome 3 this in the message tray - you have to click on this, as using the default launcher will launch a new instance of firefox: 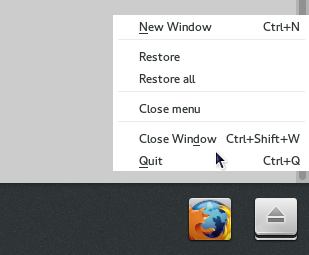 You may have to some fiddling in the settings first: 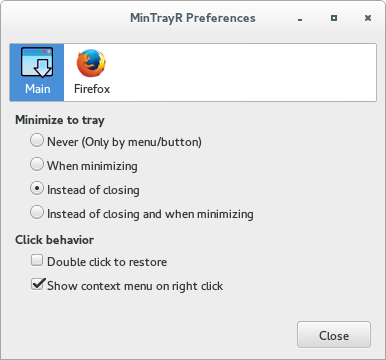 0
Firefox Hangs on ubuntu when loading java applets
1
customizing shortcuts of Firefox
1
Firefox drag and drop URL
3
Firefox scrolls up and down when I press the arrows
0
Firefox problems
51
Transfer bookmarks from Chrome to Firefox
1
Brand new user with Ubuntu and I need help with Firefox
0
How to change Firefox drop-down menu color?