How to get dual monitors working with Nvidia in Ubuntu 14.10

I just got a new Dell XPS15 whic has an Nvidia GeForce GT 750m card in it. After trying every variation of driver setup between Ubuntu 14.04 and Ubuntu 14.10, I finally have a "usable" system, but I'm not very happy with it... Everything is just slow compared to my old precision running 14.04 with an Nvidia card. (e.g. the mouse is jerky, switching workspaces is slow, etc)

However, the real problem and probably at the root of the other problems is the fact that my system doesn't seem to like my external monitor.

It works, but when I go into nvidia-settings, it doesn't show 2 monitors like I expected but instead only one as shown in this nvidia-settings image: 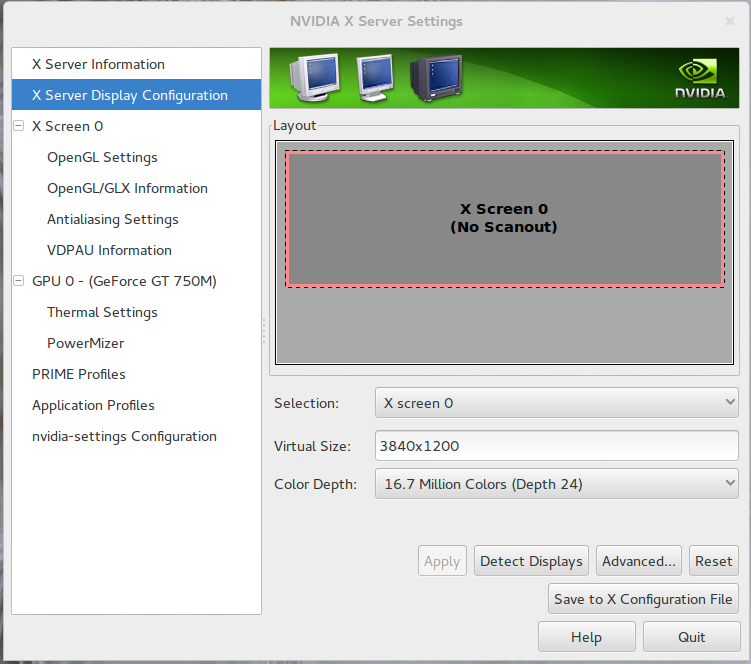 I've tried everything and I'm not sure how it's possible to get this configured.

You appear to be having a very similar issue to what I had with a Dell Alienware laptop. I posted a solution that worked for me here: Dual monitor setup, why does NVidia 340 Prime only detect one monitor?

Not the answer you're looking for? Browse other questions tagged nvidia multiple-monitors display 14.10 or ask your own question.

4
Dual monitor setup, why does NVidia 340 Prime only detect one monitor?

11
How to get Lilliput USB monitor working?
4
How to get second display to work alongside primary display?
1
NVidia dual monitor set-up 11.04
2
External monitor does not correctly display on GMA500
1
Rotating one screen with xinerama in a multihead setup
7
Can X.org Load Two Different Drivers? (Triple-Head Setup with Intel and NVidia Card)
0
Ubuntu 12.04.5, Lenovo T530 laptop with Dual monitors. Second Monitor is not recognized