Is there a CD Ripper compatible with Creative Zen MX?

I have a Creative Zen MX MP3 Player, and whenever I rip a CD in Banshee media player and then transfer the files over to my player, the metadata seems to not be there, or not displaying (E.G. No album art, no artist, no track title; just displays filename.) I have "Write metadata to files" ticked in the preferences but it still doesn't show up. Does anybody know of a CD Ripper compatible with it? I will probably end up buying an Android phone and listen to my music on that, but I'd like to try and find a solution for my player at the moment.

Also, I'm a bit of a Linux noob, so whilst I can enter commands into the terminal, find lines in files to edit, etc. I might need a bit of help :)

Edit: ADDITIONAL INFORMATION; Files downloaded from Amazon MP3 work out of the box, I download them directly through the official client or webiste.

Tried using Asunder ripper to rip CDs, it adds details to tracks successfully, but there's no track numbers, so my Zen MX just sorts the tracks alphabetically by default. Also, on a track with an é in it appears as mojibake, even though I'm pretty sure my Zen can display "é" as it displays track names that have ü and ß in them. Could this be to do with them being ripped under Linux and not Windows?

Ok, so here's the images; I ripped Now 74 as I hadn't ripped it on Linux yet, and I re-ripped it on Windows, just to make sure.

When ripped by Banshee: 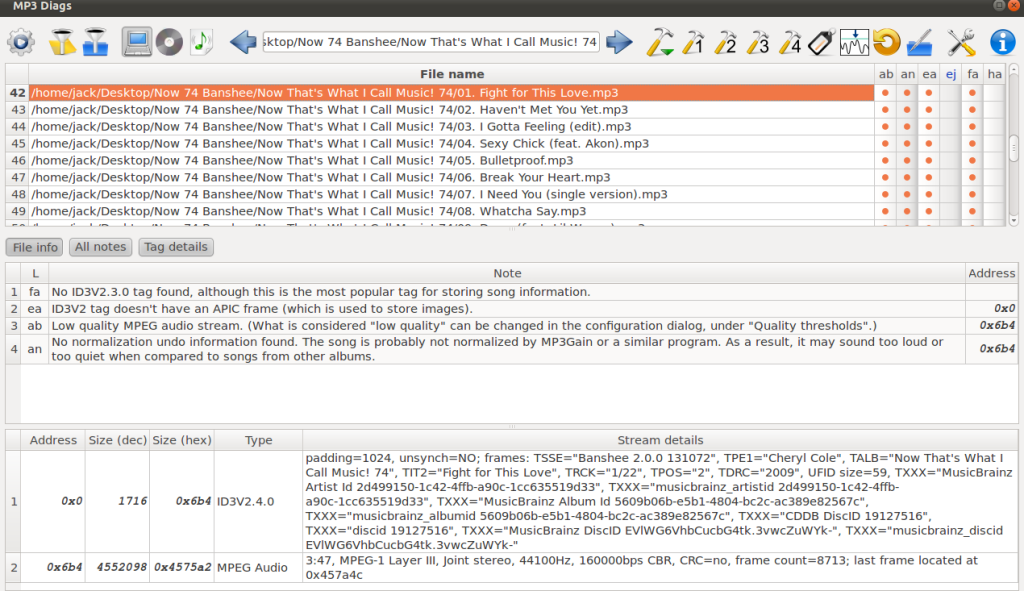 When ripped by Asunder: 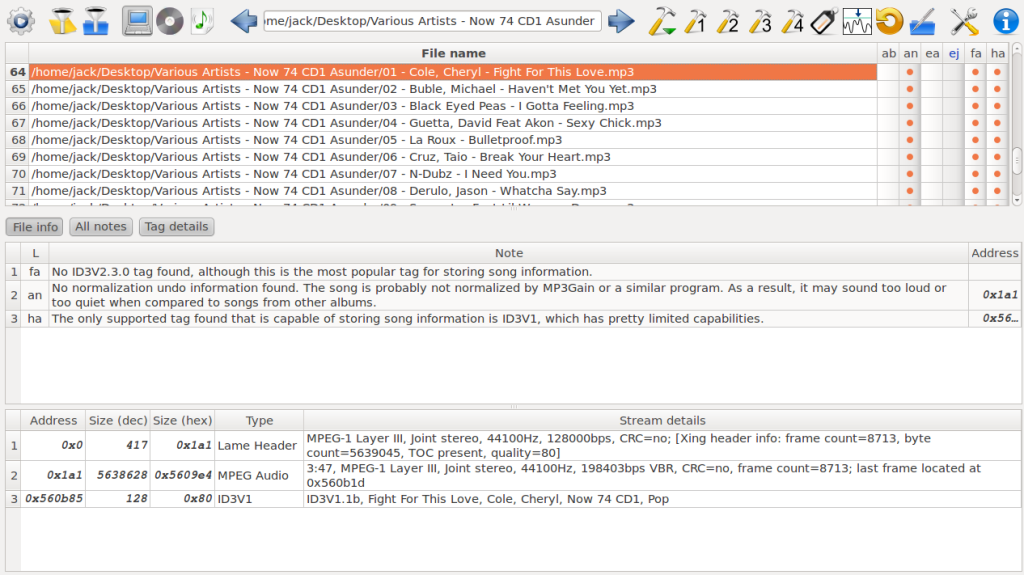 When ripped by Creative Centrale, the official (albeit, Windows only) client for my MP3 player: 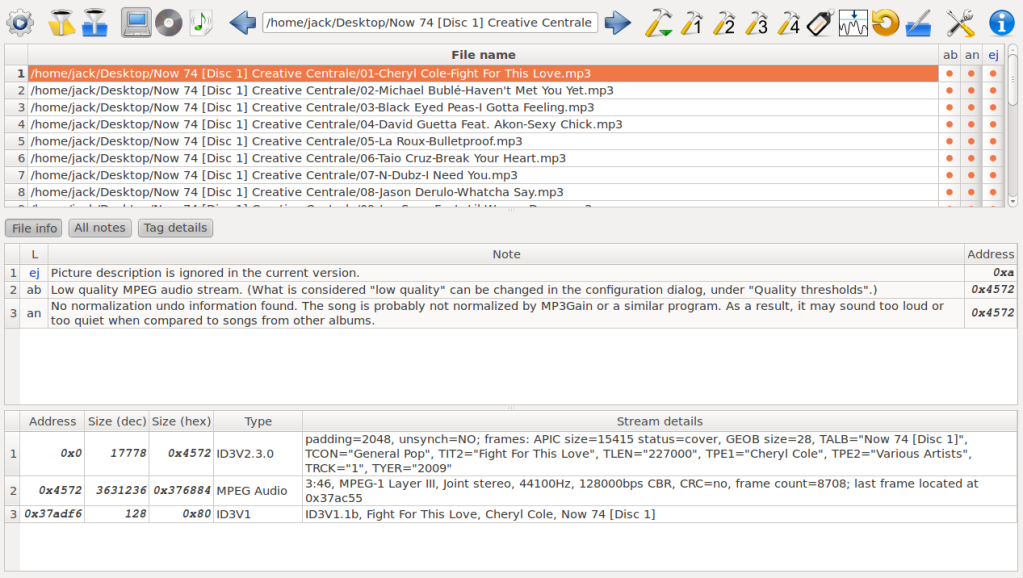 I think the issue could be the tags that CD Rippers use - they usually create ID3v2.4 tags which some Zens can't handle.

Asunder CD ripper will rip to either ID3v1 or ID3v2.x tag format depending upon the information on the CD.

Install asunder and lame from the software center.

Run asunder - and select the preferences button followed by the Encode tab.

Tick the MP3 checkbox and uncheck the ogg checkbox.

Then rip your CD.

Use Banshee or another tool to import your CD. Banshee will tag your mp3 in ID3v2.4 format

Since Asunder will sometimes not write ID3v2.3 tags and Banshee will write to a tag format that your Zen will not understand, you will need to use another application to correct the tag format.

EasyTag is such a program - just to confuse everyone, there are two versions in the Software Center. Check EasyTag - Help - About - Extensions. If it says v2.3 support is disabled, then install the other "easytag" in the software center - on natty this is version 2.1.6. 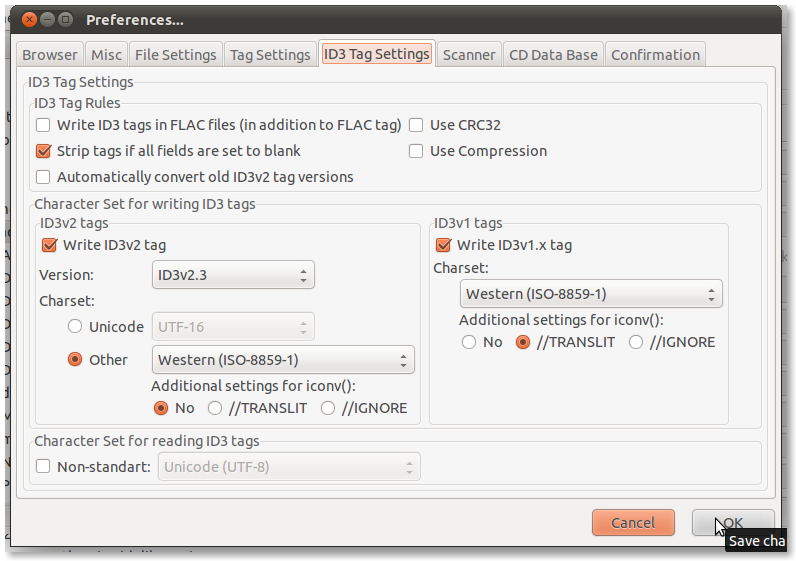 Transfer to your Zen and confirm that the tag information is displayed correctly.

Answers in this question: Erase and rewrite MP3 ID3 tags can be useful for your non-tagged files.

For an easy CD Ripping I may suggest you Sound Juicer whose easy to use interface will allow you to rip your favorite songs in a snap. 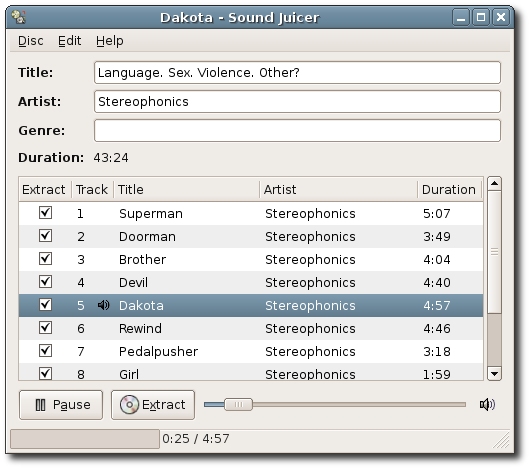 There are lots of solutions which features a GUI, from which I prefer this and it's doing a great work for me. You may wish to give this a try.

4
Erase and rewrite MP3 ID3 tags
0
Why aren't my songs showing up on my Creative Zen when I put an mp3 file on it using Ubuntu?

3
Why won't Banshee import most of my music collection from Rythmbox after upgrade to Ubuntu 11.04?
3
How to make Banshee copy files to my Creative Zen MP3 player as MP3 instead of FLAC
2
My music seems to be in "unknown artist" in everywhere but banshee
5
Are there any good music mixers available, equivalent to Windows "MP3 Tunes"?
5
How to get music metadata in Banshee?
11
How do I import Amazon MP3s with Banshee and the new Amazon Cloud Player?
7
Clementine not playing files with certain characters in the name
0
banshee has its own id3 tags?