My boot partition is on a SSD, so it doesn't have room for more than about 8 installed kernel versions, and eventually some kernel update will fail to install because my boot partition is full of old versions. There are many questions out there about how to remove old versions (even how to automate the process), but my question is simply this: Why doesn't apt-get autoremove detect and remove them automatically, and is there a way I can make it do so? I mean, apt-get is what installed them anyway, so it knows about them, so why does it choose to leave all old versions around?

As to answer why , refer to the file /etc/apt/apt.conf.d/01autoremove-kernels 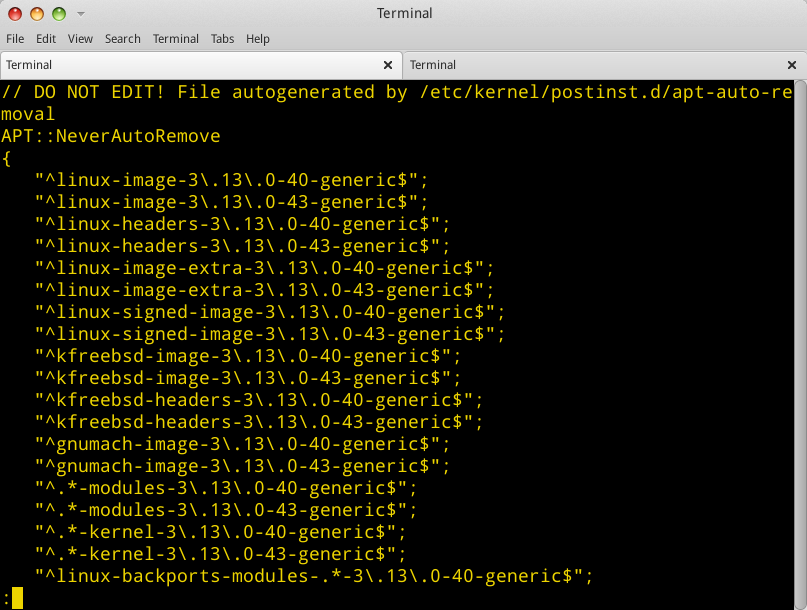 As you can see, apt is told to never autoremove the kernels , as told by another (script) file, /etc/kernel/postinst.d/apt-auto-removal. And here it is: 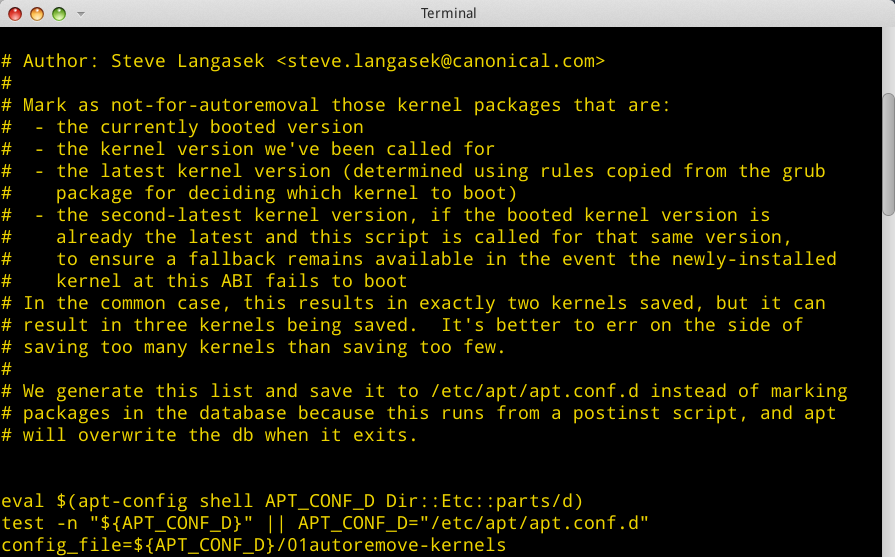 If you manually install 2 chosen kernels, ie the first and the current one, then apt-autoremove will only ever remove the older versions you didn't manually install, so you will always have those 2 options plus whatever the latest one is.

In the /etc/kernel/postinst.d/apt-auto-removal there is this part:

So if you compare the output of 01autoremove-kernels file and uname -r you'll realize that the currently running kernel and the most recent before it, are kept to be never removed by that script. There turns out is another file /etc/apt/apt.conf.d/01autoremove, where there is lines:

So you could comment these out, and it will allow you to auto-remove the kernels with apt-autoremove, though remember - do this at your own risk

For me it helped to install latest (X)ubuntu (15.10). In earlier releases kernel packages may be marked as manually installed, at least, if installed by using Software Updater, so that sudo apt-get autoremove --purge can't delete them. There are bug reports concerning the issue: Bug #1175637, Bug #1439769

In earlier release, you could try to mark kernel packages automatically installed by sudo apt-mark auto $(apt-mark showmanual | grep -E "^linux-([[:alpha:]]+-)+[[:digit:].]+-[^-]+(|-.+)$") and run sudo apt-get autoremove --purge thereafter to see, if it makes difference. The command should still not remove kernels packages shown in /etc/apt/apt.conf.d/01autoremove-kernels, but it is safest to run apt-get autoremove with --dry-run option first.

Alternatively, you could use linux-purge to purge old kernels even more selectively or even if they were manually installed.

Try removing the old kernel packages first, but if the /boot/initrd.img files remain, then this worked for me:

Remove one initrd.img file at a time.

Not the answer you're looking for? Browse other questions tagged apt kernel or ask your own question.

98
Why doesn't Ubuntu remove old kernels automatically?
0
How do I prevent the /boot disk space error?
6
Why does Ubuntu not clean out old kernel module files (in /lib/modules) when old kernels are removed?
3
Why is apt-get autoremove failing to remove my old kernels?
2
How many initrd.img files should I have on my linux server?
0
Lots of kernels not being removed by Bikeshed