How Do I Sync My Exchange Calendar in Ubuntu (Thunderbird / Lightning)?

Coming from a Microsoft Windows Environment, what is the best way to sync one's calendar on Ubuntu / Thunderbird / Lightning?

The ExchangeCalendar/exchangecalendar plugin for Thunderbird seems to solve this problem gracefully. Here are some steps to get you going: 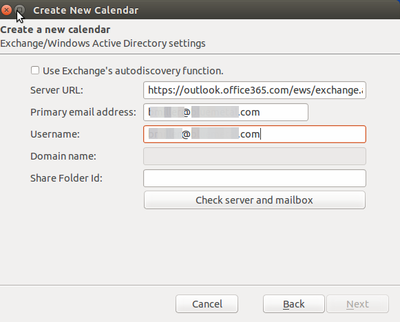 Figure 3 -- After clicking "Check Server and Mailbox", the folder base input appears with a "Next" button 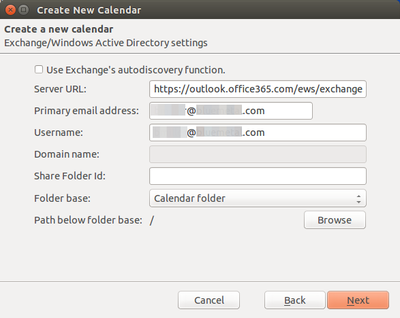 Now I rely on TbSync, it does a decent job.

I got this to work on Linux, and here's how I did it. On Windows the files are located in a different spot (Google will tell you where), but the overall method should still work with DropBox, SeaFile, or equivalent data-syncing services.

I use Thunderbird/Lightning as my email/calendar client on my main computer (Thinkpad W541, Ubuntu Unity, 16.04) and my travel Chromebook (Acer C720, Ubuntu XFCE, 16.04), and I wanted to regularly sync the calendar data between both machines. Suggestions online often mention Google Calendar, but I'd rather use open-source tools (that I control) to do the job. I use SeaFile (a FOSS DropBox equivalent) to sync folders & files between my machines.

Step 1: On my new Chromebook, I copy over my entire Thunderbird directory: rsync -zarv user@thinkpad:~/.thunderbird/ ~/.thunderbird/ Then, I install Thunderbird and open it: presto, all my accounts, old emails, and (most importantly) calendar events are accessible. Great!

Step 3: I close Thunderbird on both machines, then use SeaFile to sync the entire calander-data/ folder on both. I see that the newer filesize and timestamp have successfully synced on the Thinkpad. I open Thunderbird on the new machine, and there in the calendar is my new event. Success!

Drawbacks: The main drawback seems to be that if Thunderbird is open on both machines and either calendar is edited, syncing the calendar-data files sometimes causes the other machine's Thunderbird to crash. They just weren't built to handle that sort of I/O. But otherwise: it works great!

Not the answer you're looking for? Browse other questions tagged thunderbird ms-exchange or ask your own question.

0
Is it possible to use Microsoft Exchange Calendar with Ubuntu?
0
What is the correct way to sync Thunderbird + Lightning