How do I get rid of this allocated space?

Okay, so I like how my drives are looking: 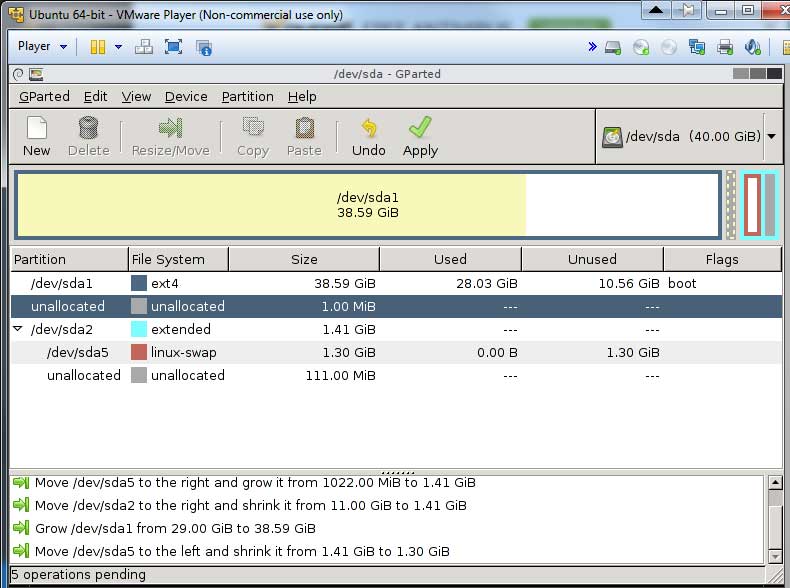 Well, almost. But I have two unallocated sections that I want to get rid of.

How do I do this? I click sda1 with a view to expanding it into 1 MB of unallocated space and sda1 I already as large as it can go.

I click sda5 with a view to expanded it into 1 MB of unallocated space and sda5 is already as large as it can go.

There are a number of issues which are probably going to make this difficult for you:

That said, I can solve your problems. sda5 is only swap, so instead of resizing it, trash it, then trash that extended partition around it. That will consolidate all the free space into one blob.

Then, create a new swap partition occupying all that unused space.

You may still have <1MB gaps between partitions for the reasons highlighted elsewhere, but Gparted usually don't even show these if they are just around normal partitions.

Not the answer you're looking for? Browse other questions tagged partitioning gparted or ask your own question.

12
How can I expand a partition into non adjacent free space using GParted?
4
How to copy /sda3 to /sda1? UUID's can't be similar
1
How to resize Ubuntu partition with unallocated space w/GParted & LiveCD
0
how to get the correct partition to boot
6
Cannot move swap space
0
Having trouble trying to expand a partition on Ubuntu 12.04
1
GParted allocation trouble on Win8.1/Ubuntu dual boot
1
16.04 Reallocate Partitions on Dual boot system
1
Allocated unallocated space to Ubuntu using GParted
2
gparted increase sdb1 from sdb2 free space