I am using ubuntu 14.04 system. Please anyone can tell me how to set static IP address on my system.

Obviously, you will want to change eth0 to whatever your network card is called (hint: ifconfig) and change your IP address, gateway, dns-nameservers to whatever you want them to be. Now, if you want your DNS to come from your ISP then don't set any and it will work fine.

Graphical way:
open system settings > network > Wired > Options
it will look like this: 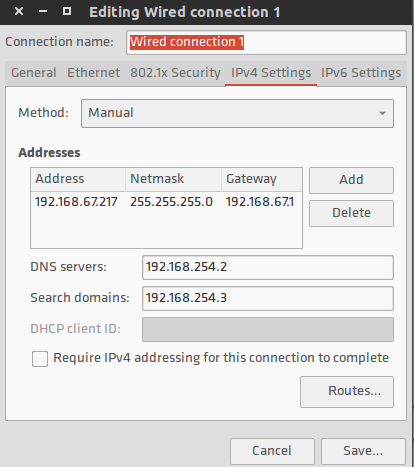 Not the answer you're looking for? Browse other questions tagged 14.04 or ask your own question.

2
Problem with setting static ip on Ubuntu Server 14.04
0
How can I install and uninstall themes in Ubuntu 14.04 .?
3
Why can't I access internet through static IP set-up Ubuntu Server 14.04?
1
Setting up Static IP Address for Wireless in Ubuntu 14.04
0
No network connection on Ubuntu VM with NAT and static IP
2
How do you Set Custom Time in Ubuntu?
0
How to change eth0 interface to bridge interface br0 with static IP in Ubuntu14.04