I've been tolerating miserable performance on my Ubuntu desktop for some time and am finally taking the time to look into it.

Symptom: Using a web browser (Firefox or Chome; doesn't seem to matter) is unbearably slow when loading a page. If I look at the Network tab in Chrome Developer Tools, I can see that some of the requests (~50%?) are making the round trip in a fraction of a second, as expected. Others, however, will just hang open for a minute+. I've found the best bet is to refresh without cache (not sure if the cache actually has an effect) and hope the next series of requests works out better.

I can usually get "simple" sites with just a few assets to work after a try or two. But more complex with lots of assets and AJAX (such as Facebook) will really just be unusable. Some parts of the page won't load, and the "infinite scroll" certainly doesn't work when I reach the bottom of the ~dozen posts originally loaded.

Please let me know what information/configuration files I can provide that might be of use!

Edit: Here's a screenshot of the network traffic. Curious how the requests all terminate around the same time. 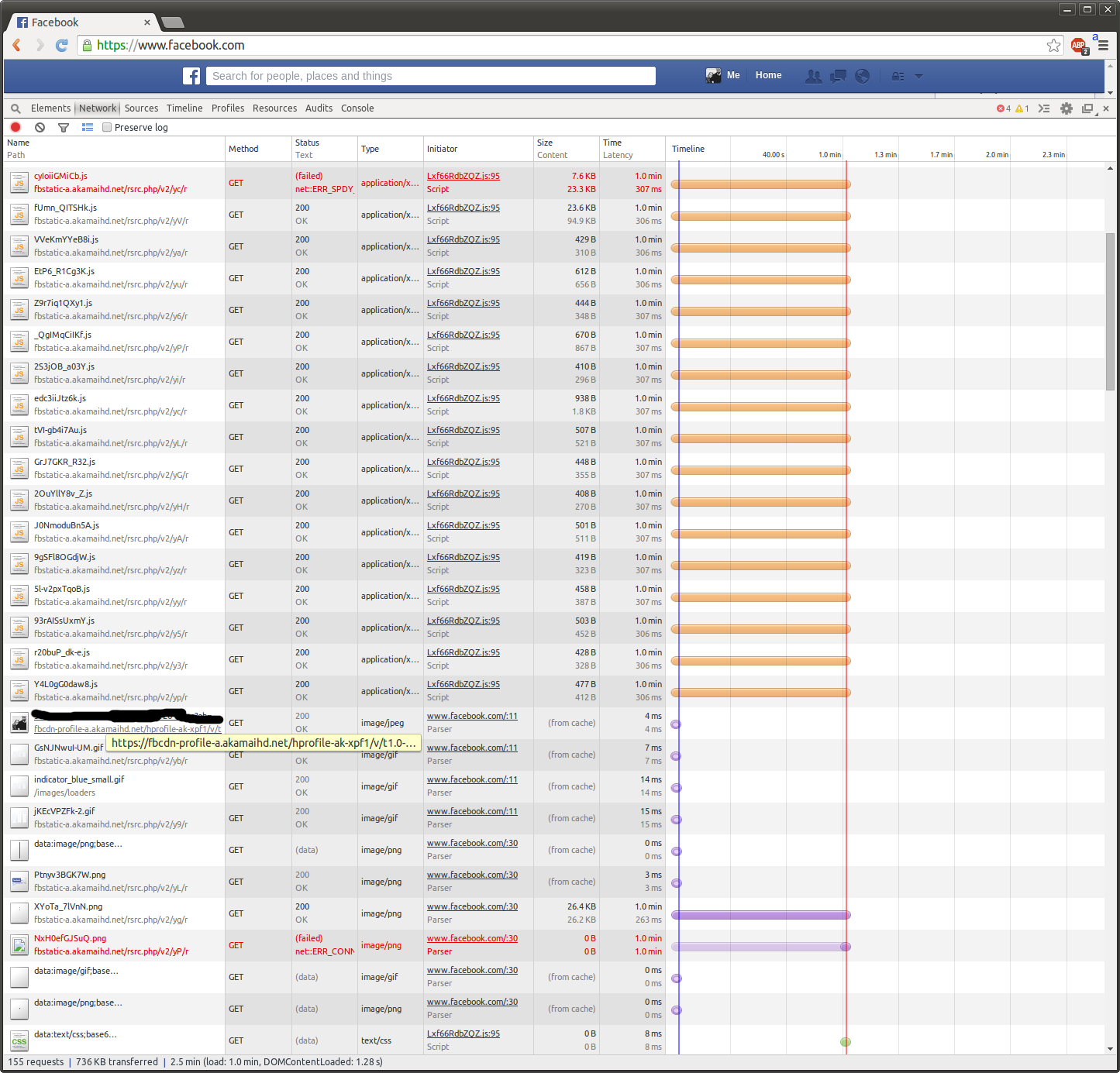 DNS was originally set to be served from localhost and was taking multiple seconds to resolve.

that's quite strange that DNS served from localhost take multiple second to respond. Why was that happening and how ? May be that is still the same problem at work here ?

Another idea: are you using a proxy ? a VPN ? check your configuration even though those things don't happen by accident.

I've seen this when the browser is trying to auto detect proxy server settings, try disabling this if it's enabled.

I see you're using AdBlock in the screenshot above. I wonder if it's causing some of the slow down? Have you tried surfing without AdBlock?

Not the answer you're looking for? Browse other questions tagged 14.04 networking firefox google-chrome dns or ask your own question.

10
Firefox Slow Performance
2
Wireless Card Worked on 8.04, Failed on 10.04, Only Works Slightly on Static IP
0
Kubuntu 12.04 - DNS Issues
0
Firefox 33 network activity is suddenly extremely slow on 14.04
0
Chrome/Firefox slow to start in 14.04
15
How do I Permanently configure the DNS server list in 16.04?
2
BIND as a forwarding DNS
0
Networking doesn't work after wake up from suspend