Can't browse the internet nor ping a host, but dig works

I am not able to browse any websites. Please take a look at the following error:

I have found that the problem lies in this file /etc/nsswitch.conf. In that file dns entry was missed. After adding that entry i am able to browse the sites. 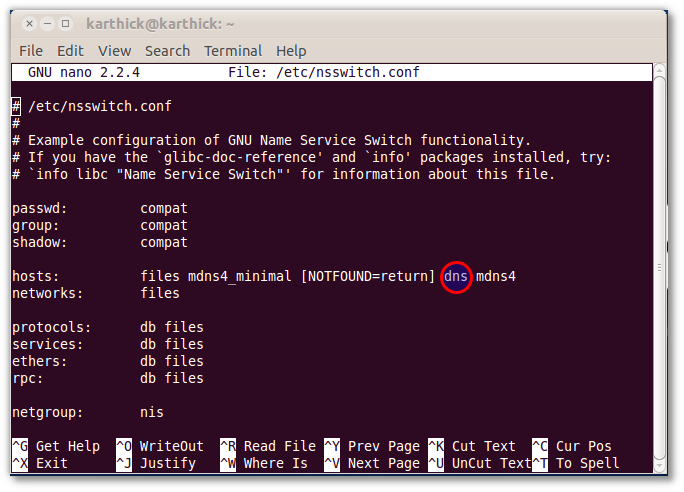 You need to add dns to /etc/nsswitch.conf on the line that starts with hosts:. For example, mine has

which I think is the default in natty.

It would be good to know if your setup was broken by some software, as it is highly uncommon (and difficult to diagnose) if the name service switch facility is not using the default settings.

It seems that you've got connectivity to the Internet (dig works ok, DNS replies are good), so perhaps it's a higher-level issue, like proxy setup.

So, have you checked your system's proxy settings?

Run dig example.com to check such a DNS query. If it times out or fails, the configured DNS server is broken. Try setting an alternative DNS server by adding the next line to /etc/resolv.conf (replacing other nameserver entries):

This nameserver is from Google, but can be set to any valid DNS server.

did you notice this

you are receiving 1.3 Giga Bytes and transmitting 1.2 Giga Bytes. I have been listening to a radio program through the web browser for almost two hours and I have only Received (RX) 888.8 MB and transmitted (TX) 22.7 MB. Something is using your network connection and this could be what is blocking your access. You do not say what OS you are using. You may now be the proud owner of a zombie machine.

Are you using a torrent? Have you given it too much bandwidth?

Then enter these commands in a terminal:

The last 2 commands are for stopping the tcpdump command.

Post the output back into your question as an edit (assuming you find a way to do so without a working internet connection - perhaps a USB key to transfer the text log to a PC with internet?).

I've recently had this problem on Windows where I had DNS but no Ping, there are two possibilities:

It must be an ISP problem, or the local modem/router/switch plays with you. Restart your machine, modem and all network affected devices.

One way to rule out the browser being the problem would be to run:

from a Terminal prompt. If it works you should have two lines that say: Connected to google.com Escape character is '^]..

Ran into a similar problem today, where all network setting where correct, but I could only ping and reach local machines.

I checked the above file and had the DNS entry but noticed I missed the mdns4 entry . After adding the mdns4 all is OK. Mentioning this in case some one else runs into same problem

I realize this has been solved, but I had the same symptom and the solution had to do with the default network interface card that is used by the program in question.

Dig's behaviour appears to indicate that it iteratively goes through all the interfaces until it gets a response, whereas ping just tries the first interface then stops/gives up.

After "downing" the first interface with:

ping then started using the DNS on enp0s8

Hope this helps anyone who might still be trying to figure it out.

Not the answer you're looking for? Browse other questions tagged networking dns or ask your own question.

4
Not able to connect to local network
5
Internet connection not working although it says it is connected
3
Completely disappeared Wireless
1
14.04 no internet connection when I up the bridge interface (for LXC container)
2
Dual NIC not working
0
Trying to open port on Ubuntu 18.04 Server - I'm missing something