How can you get the lines in the GNOME Terminal to wrap dynamically when you resize the window?

At the time the question was asked, this was not possible in Gnome Terminal. However, a fix was committed in late 2013. This change didn't make it into Ubuntu 14.04, but it should be part of Ubuntu 14.10.

According to the issue on Launchpad, you can have this feature today by enabling the Gnome-team PPA. You can activate the Gnome-team Staging PPA (staging required to get latest version) by doing the following

Re-install gnome-terminal to get latest version

The default Gnome Terminal doesnt allow you to do this - however, if whilst in the terminal you type screen - it will run the terminal in a terminal emulator which does resize correctly.

For example - here is my home folder whilst running ls -l 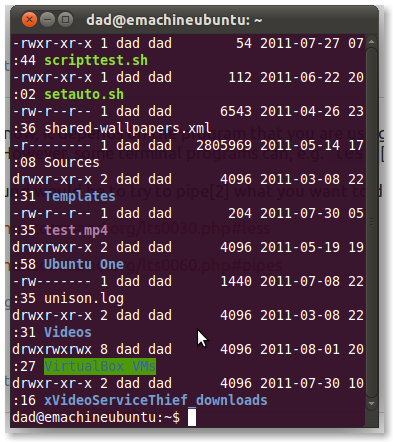 and here is the same screen resized horizontally 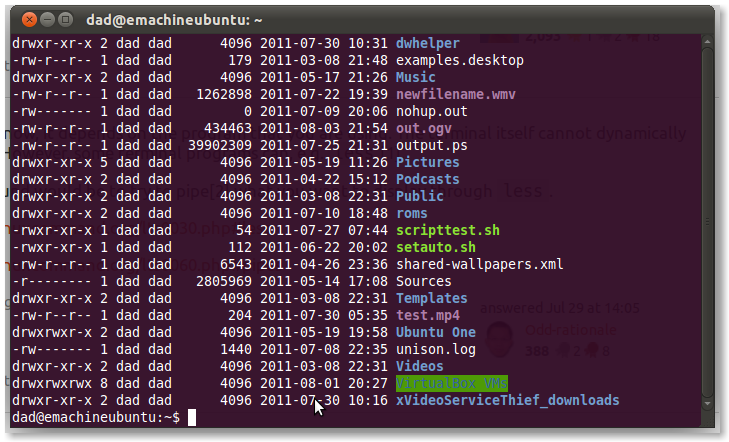 then edit the gnome-terminal.desktop file and change the Exec command line to:

I'm making great progress in implementing rewrapping in VTE (gnome-terminal etc.). Please see the upstream bug at https://bugzilla.gnome.org/show_bug.cgi?id=336238 , feel free to try my patch if you're a hacker kind. In case of any technical feedback, please comment in that upstream bug, thanks! Hopefully my work will soon end up in mainstream VTE.

gnome-terminal can't do it (upstream bug).

After some experimentation, rxvt-unicode seems like it will work.

The reflowing only works after you have enough text to fill up an entire screen's worth, aka once you hit the scrollback buffer.

On a personal note, I find rxvt to be quite ugly, but if reflowing is more important to you, go for it.

While I unfortunately don't know the answer to this for a normal terminal session, I know how to do it if you're using screen (even if you're using byobu): reattach your screen by using the following:

This will scale your screen session as you resize (and also detach any existing running sessions) and is what I always use to bring back a screen session.

As far as I know, it depends on the program that you are using. The terminal itself cannot dynamically wrap text. However, some terminal programs can, e.g. less[1].

A work around would be to try to pipe[2] what you want to display through less.

Solution: install screen (sudo apt-get screen), and launch it in your terminal.

Over the last 5+ years I have periodically spent lengthy sessions in care & feeding of Linux machines (in far away places). And, basically, Gnome Terminal doesn't quite cut it ..

I have often used Windows-based SecureCRT and SecureFX (SFTP) on both XP and Win7, as well as on Ubuntu (under Wine), giving me a much better set of features, including: multi-windows and/or tabs, saved settings, login macros, by-session colorization, much customization, integrated SFTP, and even scripting .. There were always minor glitches (with Wine, partic. with SFTP), and I often strayed back to Gnome Terminal for local tasks on Ubuntu.

However, since early this year (in beta), I have had SecureCRT (native to Ubuntu). Other than getting tighter integration with Nautilus (or something) for SFTP/SSH file transfer, this has nearly replaced my use of Gnome Terminal.

Even new machine setup is better with hassle-free cut & paste, full session capture, and saved connection settings. It has always had superior re-size, re-flow, and character-set handling even over most of the other terminal apps.

8
How to reflow text in a terminal when you resize?

2
How do I get gnome-terminal not to truncate lines?
35
How to stop the terminal from wrapping lines
28
Command-line to switch between profiles in gnome-terminal
15
Adding a border to gnome-terminal
0
How can stop tab wrapping in terminal?
3
Getting gnome-terminal to run tmux on start
3
Katepart - "Wrap dynamic at static word wrap marker" as a toolbar button or Kate command?
4
GNOME Terminal bash line wrapping issue