Plymouth and GRUB do not show at all [closed]

I am using Ubuntu 11.04 64-bit as my only OS on my desktop computer, which used to only run Ubuntu 10.04 LTS until I had the time to upgrade it with a fresh install. It uses integrated NVIDIA graphics (listed as a GeForce 6150SE nForce 430 by the NVIDIA X Server Settings utility) with the current proprietary driver as provided by the Additional Drivers utility, and has a VGA connection to a 1680x1050 Acer monitor.

I used to get the (ugly-looking version of) Plymouth graphical boot screen while under 10.04. It didn't look that great, but I was fine with it. Now, it doesn't show on 11.04 at all during boot (I just get an error message in a moving gray box from the monitor saying "Input Not Supported"), and only rarely it will show on shutdown, all garbled up. I could not get GRUB to show during boot while holding down Shift, either (same error message), but pressing Enter while it should be up starts the system normally.

A picture of the error message I was getting: 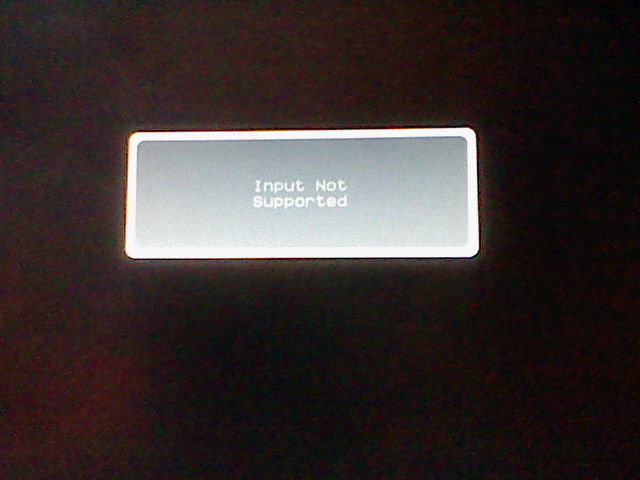 Any information on how to troubleshoot this would be appreciated. If there's any hardware-specific stuff I forgot to include here, let me know the relevant commands to run in a comment below.

I have added the current contents of /etc/default/grub as requested in the comments:

CURRENT STATUS: I forgot to uncomment one line as per "things that I've tried" #4, so I took care of that. I can now see GRUB during startup when I hold Shift and a normal-looking Plymouth during shutdown...but Plymouth during boot is now just a solid purple screen. In each case, it's displayed a little off-center to the left, with a thin black bar running down the right side of the monitor. The error pictured above no longer shows. I'd say this problem is about 2/3 solved now.

UPDATE: After Natty started freezing up on me, I decided to dual-boot with Oneiric, which unfortunately shows the same problems. Rather than trying all these workarounds though, I decided to do what I should have done from the start and file a pair of bug reports.

LAST UPDATE: Bug 850908 has been confirmed as a legitimate nouveaufb bug. I have overwritten my 11.04 partition with 12.04 LTS, and I can confirm at this time that the issue is present there, as well. I will now flag this question to be closed, yet I hope it was helpful for anyone who experienced similar issues; if you are still having the same problem as me, please go there and mark yourself as affected. Thanks!

If grub is not displaying correctly, you can try modifying these settings in /etc/default/grub:

By default, grub will try to use the "preferred" video resolution as returned by the video card via VBE. If the mode specified here is not compatible with your monitor, you can try commenting out gfxmode entirely and running sudo update-grub to let it use the video card's default mode; you can set GRUB_GFXMODE=640x480 to specify a mode that any VGA-connected monitor should support; or you can uncomment *GRUB_TERMINAL=console* to switch to a text-only mode that should display.

Once you're able to load grub, you can get a grub shell by hitting the 'c' key, and can then get information about available video modes with the 'vbeinfo' command; you could then try these one by one until you find the best mode that's compatible with your monitor. Note that even if your video card supports the 1680x1050 resolution of the monitor, it may not be supported when in BIOS mode; this is what the vbeinfo command tells you.

It's also possible that you may need to adjust the settings on the monitor so it will be ok with handling the input you're trying to send it.

Once you're able to find a mode that's satisfactory for grub, you should be able to apply the same mode to the uvesafb framebuffer via the kernel commandline to get the same results for plymouth.

Did you try setting GRUB_CMDLINE_LINUX="gfxpayload=true"? Also set GRUB_GFXMODE and GRUB_GFXPAYLOAD_LINUX to both your system and grub supports.

Maybe some this helps you as well:

How do I get my blacked out ttys back?

As you are using the Nvidia proprietary driver, may I ask have you looked at the Nivida X Server Settings configuration for that external monitor? May be some adjustment there might make a difference. The Input Not Supported message is coming from the monitor. The signal is coming from the Graphic adapter. So, the issue could be down to incorrect settings in the Nvidia X Server.

I have the same issue with my desktop (AMD x4 desktop running 11.04 and NVIDIA drivers) so the problem is with Plymouth not detecting your monitor type.

Plymouth is an application that runs very early in the boot process (even before the root filesystem is mounted!) that provides a graphical boot animation while the boot process happens in the background.

There is a product called Plymouth Manager, and you can add it by going to the terminal and entering ...

In that program it allows you to change the resolution at boot up and select the standard theme or a custom theme of your liking.

you can try installing startup manager. i think the bootloader menu in your case is showing in a resolution of 640x480. i had a similar problem (i think) in which my monitor just shows 'out of range' and pressing enter does the trick (since i'm on dual boot too). there's an option in startup manager to change the resolution, max i think is 1280x1024 or 1900x1200.

Not the answer you're looking for? Browse other questions tagged nvidia grub2 plymouth acer vga or ask your own question.

17
How do I get my blacked out ttys back?
10
Is there a way to save the output of vbeinfo?
13
How to upload package with dependencies to my PPA?
3
How to enable the Boot Splash Screen?
1
“Can not display this video mode” error during boot, followed by empty desktop

0
Splash screen doesn't show on boot
1
Plymouth splash not showing, purple and black on boot
1
How to restore plymouth to its original state?
0
Plymouth manager boot splash screen only during shutdown and not during Restart
2
Why do I have grub file in my home directory?
2
Ubuntu 16.04 Plymouth doesn't show splash screen at startup!
0
Not able to boot system after changing plymouth theme