What is the difference between running a certain command in terminal and a Thunar action command that opens a terminal and runs the first command?

What I mean is that on several occasions I was able to successfully run a command in a terminal window opened in a certain folder, but when using a command (run not directly from terminal, but from a Thunar custom action) to do the same - that is: open a terminal in the same folder and run the same initial command - it would not work as expected.

For example, I have a folder that contains a pdf file. I want to save the pdf pages as images.

CASE 1: I open a terminal in that folder and run this command: pdftoppm -png *.pdf prefix. The pdf pages are extracted as png files.

CASE 2: I try to do the same from Thunar custom actions. I create a custom action with the command xfce4-terminal -e "pdftoppm -png *.pdf prefix", Appearance conditions; Directories, but that does nothing. To get more details, it is useful to keep that terminal window open after the command is run, but I do not know how to do that with the Xfce terminal. Using gnome-terminal I create a profile called new1 with the setting "When command exits: Hold the terminal open" then add to custom action this command:

But this gives an error:

I have an answer to the question Thunar - Custom actions: save selected pdf as images. The command that works in Thunar custom actions is pdftoppm %f -png %f.png.

But I am curious why a command works in terminal but a different command that opens the terminal and runs that command does not.

On my system, the Thunar custom actions seem to call the command with bash and makes the use of xfce4-terminal superfluous.

Try the following action instead: 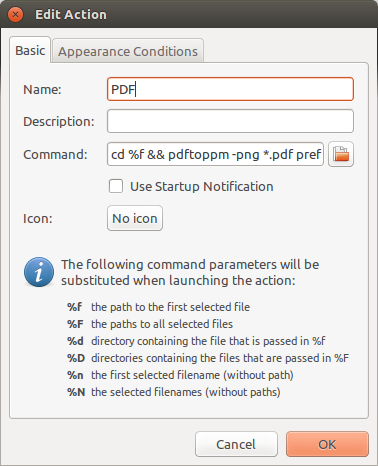 You get the I/O Error: Couldn't open file '*.pdf': No such file or directory. message as your selection is now a directory and the current directory is then one level up.

So you need to first cd into the target before running the pdftoppm command.

1
Error when running script ('compress-pdf') in Thunar custom actions
1
Thunar custom action to open terminal as root
1
Thunar - Custom actions: select pdf extract pages as images
0
Custom actions will not show up in Thunar context menu under “send to”
3
Same command that works in terminal does not work as Thunar Custom Action
3
Xubuntu find files in thunar
2
Command showing different behaviour when running from terminal and when Using as Shortcut
0
How to create a bash script to create images from pdf file and then crop all of the *.png images to 1920x1080 (using mogrify)?
0
Opening a terminal, running a command, and leaving an interactive terminal open