I'm trying to set up a computer with 3 HDTVs as one big screen, with each display being rotated 90 degrees to form a 3240x1920 desktop. I have them all hooked up and working, but when I try to rotate them to get the desired arrangement, suddenly I'm unable to drag the displays close to each other in the display manager. This forces there to be a gap between the 3 displays.

Has anyone else encountered this problem, and if so is there a workaround? And if not, is there a different program I can use to do this?

Running Ubuntu 14.04 LTS, I was able to reproduce your problem using both unity-control-center (the default "System Settings" manager for Ubuntu) and mate-display-properties (which implements "Monitor Preferences" for the MATE desktop alternative). If you just rotate the displays, it won't let you simply drag them closer together -- seems like a bug, maybe this one.

I was able to work around the issue by just messing around a bit (after setting the desired orientation). Here's a sequence that seems to work (given my particular starting arrangement):

It's like some kind of sliding puzzle, where you can't go directly from the beginning to the end, but instead have to transition through intermediate "legal" states.

Below is a screenshot after the first step is completed. 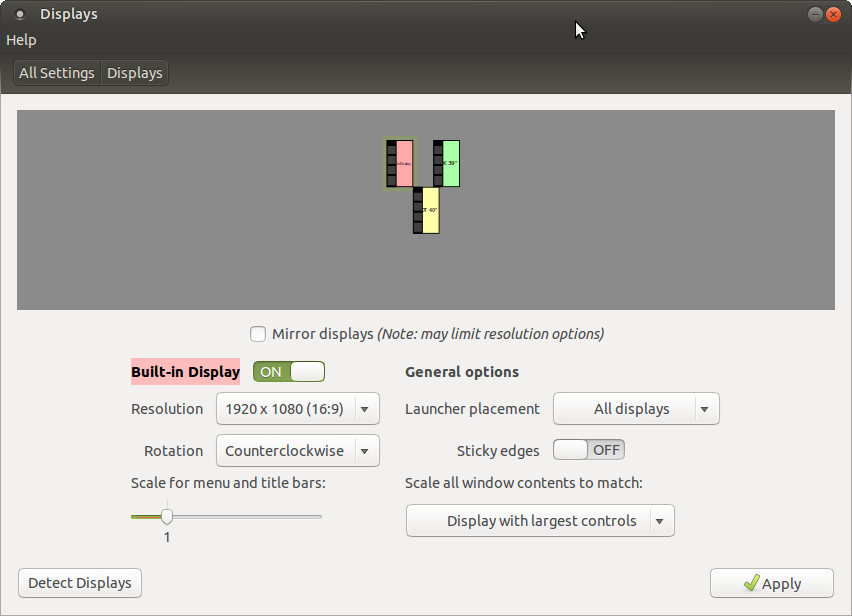 EDIT: 3+ years later, I can no longer reproduce the fix that I posted here. There is clearly a bug in the MATE version of the tool.

ARandR is nice for multiple reasons:

I use ARandR (a front-end to XRandR) for this. ARandR is independent of your graphical environment; it is not a part of GNOME but should work fine if you are running GNOME or whatever else. (I prefer a minimalist setup and run Xfce.)

To enable a display that is not currently on, go to the Outputs menu, hover your mouse over the connection type, and check the Active box.

Once you have your desired layout, save it to a file (e.g. ~/.screenlayout/triple-head.sh). You can set this to load automatically by making the file executable (chmod +x ~/.screenlayout/triple-head.sh) and then adding it to Startup Applications Preferences in your Control Center (the saved layout is the Command, the Name is what you see in the menus, and the Comment is a description of what this does). In certain(?) circumstances, the configuration is loaded automatically upon launching your X session.

You can also switch between saved layouts in the same kind of manner; just execute the saved layout, perhaps with a keyboard shortcut or even a script to recognize the different monitors as they are plugged in.

There is a very detailed and comprehensive post by Nicolas Bernaerts to rearrange a multiple-monitor setting using xrandr and make the changes persistent here.

6
How to generate ~/.config/monitors.xml file from a script?