How to get another text-file be opened in new tab in mousepad?

Earlier when I used to gedit in Unity environment, when I opens a text file with gedit (considering one file is already opened in gedit), then it opens in new tab in already opened window.

After installing xubuntu-desktop, Now I am using mousepad (default text-editor in Xubuntu) in Xubuntu. But when I opens text-file (considering one is already opened window) it opens in separate window instead of in new tab in opened window.

Thus, How do I get another text-file opened in new-tab instead of separate window?

Note: If I open files using File>Open in mousepad or selecting multiple files and openwith mousepad then it opens in multiple tabs but this is different case.

This is an old question, but for the benefit of anyone looking now, this is possible (at least as of version 0.5.4 of Mousepad). There's now an option in the preferences to open files in new tabs under Preferences > Window > Notebook tabs 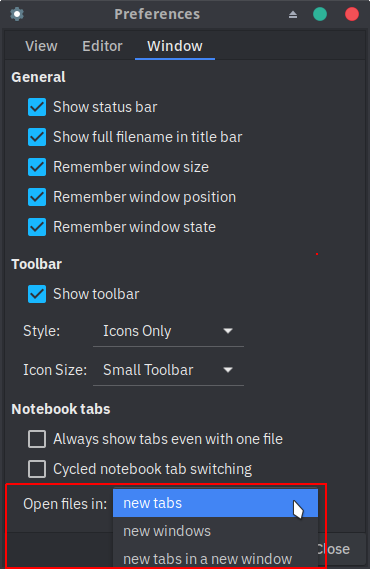 It should be said that using gedit in Xubuntu is not an issue. Both use gtk, which makes gedit a native application to Xubuntu, in a sense.

So forget about trying to get mousepad to work like gedit. Just keep using gedit!

How ever Mousepad doesn't behaves like gedit and it opens new file in new window; you can use menu option : File -> Open option from Mousepad.

Alternatively you can drag a text file to the already open Mousepad window to open the dragged file in a new tab!.

8
How to avoid opening duplicate files in new windows in gedit?
35
Why does gedit keep randomly opening new instances when opening files from nautilus?
2
How to open new doccument tab in gedit and send text flow into it from terminal?
6
Configure Gedit to always open documents in new tab
0
gedit open second file onwards in a new window. Ubuntu 19.10
2
Gedit tabs preference
1
gedit will not open a new tab for when opening a second document and onwards
0
How to recover the - Accidently selected "No" option for "open recent files" in Mousepad text editor