I tried installing ttf-mscorefonts-installer from the terminal, because I want to use Wine.

It looked kind of like it failed on the Comic Sans part. Viewing it just displays the text in another font.

Then this Failure to download extra data files window popped up. 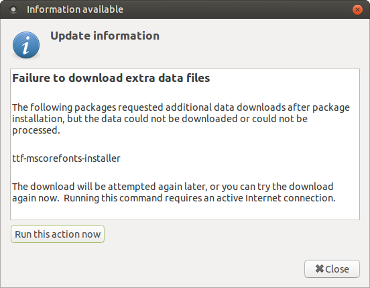 I tried uninstalling ttf-mscorefonts-installer from the terminal and then reinstalling it by following the instructions in this answer. This time it failed to fetch the first font, andale32.exe. I got an error message that said: invalid content-range header.

Download and install this via software-center and boom! It's working :D

A straight-forward option work-around can be implemented as follows using a Debian repo (reliable):

Hopefully, the Ubuntu repo version will be fixed soon.

As for a freshly set up Ubuntu 64-bit 15.04 with all extras also installed during installation, Wine stopped half-ways in the process, and it was connected to the mscorefonts, with the repeated error message given above. After waiting some hours, I quit the software center, and rebooted. The following lines cured the problem completely and set up the mscorefonts correctly, as far as I can tell. Explanation is given underneath.

The first line tells that the second line (the dpkg) has to be performed, to complete wine installation. Then, when this takes places, it tells that andale32.exe is not as expected (in hash value, which probably refers to an earlier version of it or such). Assuming that it is okay, it is then manually installed, in this case by running 'sudo' in front of wine, which may not be necessary. After the final line and a wait, the question of whether to accept the fonts arises as a nice window. A repeat of the --fix-missing reports no need for additional commands.

To fix this try removing and re-installing ttf-mscorefonts-installer from the terminal only - there are some prompts which need to be answered, and are not always done properly in a graphical window:

Open a terminal with alt+ctrl+t