Is there a package of Ubuntu drivers as driver pack solution? I tried to search for it, but I did not find it. If there is, how can I easily get it?

drivers software-installation ubuntu-drivers
Share
Improve this question
edited May 12 '20 at 0:21

Ubuntu has a built-in ubuntu-drivers program that can decide automatically which graphics driver to install, and streamlines the installation of Nvidia drivers. Open the terminal and type:

If you visit the official AMD or NVIDIA websites you will often see that the latest version of the proprietary graphics driver for your GPU is a little bit more up-to-date than the version of the same graphics driver that is available from the default Ubuntu repositories. Don't worry about this, because if the difference between version numbers of the two proprietary graphics drivers is small, then you will get similar performance by using either of the two drivers. If you install a graphics driver from the default Ubuntu repositories, you will also get automatic updates for that driver which are sometimes linked to kernel updates. 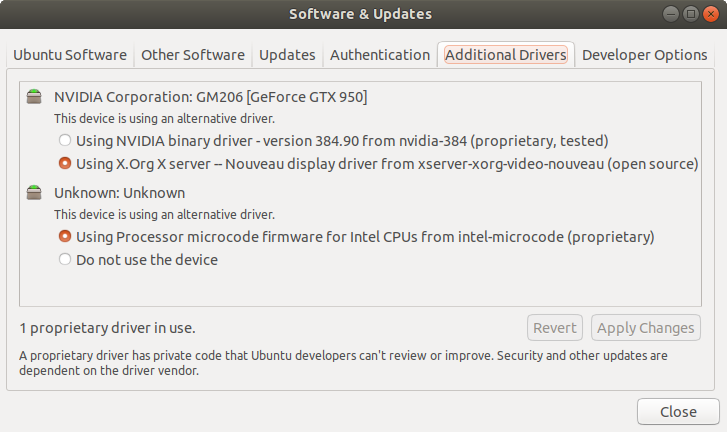 if |Additional Drivers| tab area is blank, then:

go back to |Additional Drivers| tab: "Searching for Available Drivers", takes a few seconds, then it populates.

go back to |Ubuntu Software| tab and uncheck box [ ] Proprietary drivers for devices (restricted), if you wish to ensure tight security

Not the answer you're looking for? Browse other questions tagged drivers software-installation ubuntu-drivers or ask your own question.

8
Installing additional drivers in kubuntu
4
Ubuntu auto-detect Nvidia driver version for install
2
Nvidia GTX 1660 - which driver do I have to install
2
How do I install Intel graphic drivers on Ubuntu 14.04 for DELL Inspiron N4050
2
Screen doesn't turn on after startup
1
How do I check the status of my drivers and install them if needed?
0
When I install Ubuntu, must I get new drivers? IMPORTANT
0
Drivers for Linux Distros
0
I want to know about Ubuntu Drivers
0
Does Ubuntu install drivers automatically?
See more linked questions