I have problems when compile SFML-project(don't see any graphic):

This error can be solved by simple reinstalling nvidia-drivers through this tutorial: https://askubuntu.com/a/451248/341889

..but when i get new updates - this error is returning ;( What should I do? It's not the solution - not use system's update...

P.S. and yes, i saved all changes after installing nvidia-drivers

The swrast thing is the software renderer. That means it's not finding the hardware driver for your graphics card. There are a bunch of libGL libraries installed and a bunch of of symbolic links to those libraries. To see these run this from the shell:

Now the probable cause of your problem is that installing graphics drivers sometimes break these symbolic links. (Specifically /usr/local/lib/libGL.so.1.2.0 is likely to be either the wrong lib or a sym link to the wrong link) (N.B. I wrote this a while ago. libGL.so.1.2.0 was the current gl version it may be something else now).

To work out what library the OpenGL programs are trying to run you can turn on a bit of verbosity and run a simple OpenGL program. You can verify this using the standard OpenGL test program:

Hopefully that will fail in the same way as SFML. With LIBGL_DEBUG it should tell you what OpenGL library it's trying to load. Furthermore the lib it will be trying to load will almost certainly be /usr/local/lib/libGL.so.1.2.0 (Edit: This was the standard OpenGL library on my machine at the time I answered this. It may well be some other version on your machine now).

So the solution (in this case) is to make sure that /usr/local/lib/libGL.so.1.2.0 is a symbolic link pointing at the right OpenGL library. In my case I have the Nvidia 3.40 driver so I ran:

But you'll want to point it at the OpenGL lib that is appropriate for you (listed in the first find command).

Got same problem on ubuntu 18. This happened basically only with 32bit apps. So my idea was to install 32bit nvidia something, as my /usr/lib/i386-linux-gnu/ folder was suspiciously empty.

After very few tries, this fixed my problem with steam and wine not starting:

(and change 418 to whichever version you have)

Interesting that the applications did not complain about missing dependencies during installation.

I was having problems getting the correct symlink to point at the nVidia driver and I found another way that works for me.

It is outlined here.

And it lists on how to install the nVidia driver via PPA which is avaliable for 349.16, the latest version.

Then open another terminal and type the following

I tried it after getting lost with the symlinks and steam worked fine immediately after the installing the driver and again it was still working after I had 400+ megs of system updates.

I had the same issue on Ubuntu 16.10 with the nvidia-340 drivers and none of the solutions here worked for me.

Turns out the 32-bit libraries were not on the library path.

This one liner worked for me:

I just use this line:

Because I see such input when I execute sudo ldconfig -p | grep -i gl.so:

To provide an alternative to Adrian's answer: if you prefer to use proprietary drivers sourced directly from NVIDIA instead of those found in a PPA, installing (or in my case, re-installing) the latest proprietary driver can help eliminate the swrast error.

If you don't have the NVIDIA driver yet, download the driver from NVIDIA's website. Next, switch to tty (ctrl+alt+F1) and turn off your login manager:

Navigate to the install script and run it, and follow the prompts. Don't worry if the pre-install script fails. I always accept registering DKMS and the 32-bit compatibility libraries. After the driver is installed, restart your machine:

This will get you the most up-to-date version of the driver.

I have to admit, I'm not sure why this works for me, but it did. In this particularly case "fixing" the ld.so.conf.d entries by adding a new entry like this works:

This makes sense, until you run the following find:

Why having the same entries in triplicate works, but not in duplicate, I have no idea!

Here's an apt-only solution that worked for me, no symlinking or mucking around with ld.so.conf.d:

The version of your driver is showed in nvidia-settings.

has been key. I run 'glxgears' to check that the graphics libraries were running fine -- see also man glxgears -- showing this animation: 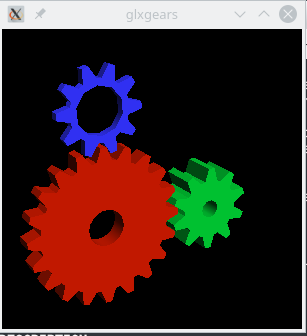 Then my solution was simply setting the environment variable

I am indebted to https://github.com/openai/mujoco-py/issues/44 for clues

I had this issue recurrently, with every new driver destroying steam. I now use steam flatpak and have zero issues.

Seems like the NVIDIA installer simply gets the locations wrong on certain distros. Ubuntu 19.10 and was having issues. 'locate' revealed the NVIDIA 32-bit libraries did exist, but not in the right place. This one-liner fixed it for me.

P.S. this would only work for 32-bit related issues.

This fixed it for me: sudo apt-get install libnvidia-gl-390:i386

I was getting this report in the PlayOnLinux debugger. I ended up switching to the recommended Nvidia driver and then uninstalling the default graphics driver. I then reinstalled the Nvidia graphics drivers through Synaptic Package Manager and that stopped the madness. I don't know how the inner workings of the library linking is established but the Nvidia install seems to work better without the default driver in the way. It fixes the links.

I was facing this weird issue when I ssh to my Ubuntu VM from my Macbook Pro, but installing the below Nvidia driver on my Ubuntu 16.04 fixed the issue. Hope this works for you.

Not the answer you're looking for? Browse other questions tagged drivers nvidia updates opengl or ask your own question.