According to Synaptic, it's already installed.

Can someone give me some simple step-by-step instructions on how I can actually run it from the command line or otherwise?

Once lm-sensors is installed you need to reach for your terminal:

just press ENTER for everything it suggests (shown in Uppercase)

At the end it will ask you whether to add what it finds to /etc/modules. If you are happy with the findings type "yes".

will display the values for the sensors detected previously.

is a set of tools to control and view sensors that may be present on your hardware. Included are several applications that run from the command line:

To run these programs open a terminal and type the name of the application (including optional parameters, see manpages for details). This will give an output similar as shown here for sensors:

I'm quite fond of psensor... it runs on the Indicator Bar (the "Systray" near the clock), so it is perhaps the most unobtrusive app that uses lm-sensors. It also can show a nice window with graphs displaying the history of each sensor, just like System Monitor does for memory, CPU usage, etc. It has logging too!

It also uses sensors other than lm-sensors, like hddtemp for HDD temperatures and NVidia and AMD GPU (video cards) temperature and fan.

Better screenshots than mine can be found in the author's website:

It has a graphical interface that is easy to understand. It shows me the motherboard voltages (there are four of them), the CPU and motherboard temperature as well as the CPU fan speed, the speed of three chassis fans and the power fan speed. All monitored in real time. And it loads into the the Unity Dash. 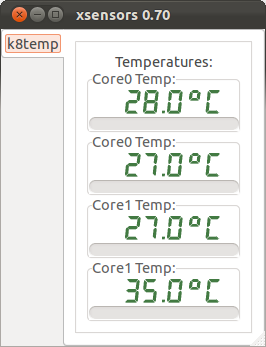 If you use XFCE, I think it`s better to show it in toolbar, like this, use this plugin: 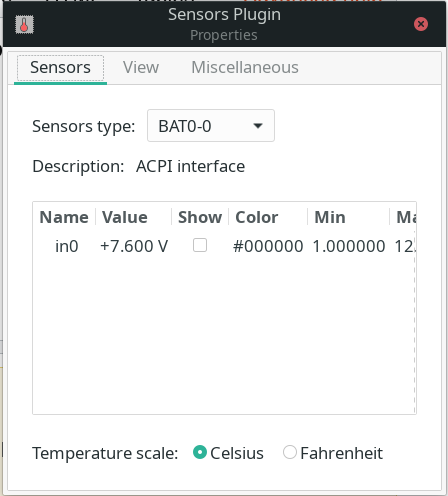 The effect is this:

Not the answer you're looking for? Browse other questions tagged sensors or ask your own question.

1
Ubuntu can't read temperature sensors?
14
How can I see the GPU temperture of my ATI graphics card?
4
How do I install lmsensors on a server?
2
How to read lm-sensors on AMD FX 6300?
2
proliant dl380 g4 lm_sensors doesn't work
2
How to read hardware temperatures and other info in Ubuntu
1
Ubuntu overheat and instant shutdown
2
Using the sensor command doesn't give me fan speed in Ubuntu 14.04 LTS
1
Is there a Temparature monitor application for Ubuntu 11.10?
0
High CPU usage compared to WinXP. Common aps and actions use 100% CPU cycles
See more linked questions

4
How to start sensors-applet
5
How do I install the GNOME sensors-applet package in Unity?
2
lm-sensors reports incorrect chassis fan speed on ASUS M5A78L/USB3 in 12.04LTS
19
Manually turn on CPU fan
0
'sensors' command from lm-sensors keeps reporting the same temperature
1
My fan is not working, no active cooling system
4
improve bash script
1
Terminal command to show a summary of memory used, temperature, and GPU use in a single screen, in a simple way