How to open magnet links from firefox with deluge

How can I open magnet links with firefox? I tried setting following values in about:config,

But firefox keeps on complaining about

Firefox doesn't know how to open this address, because the protocol (magnet) isn't associated with any program.

Edit: I was told to set network.protocol-handler.expose.magnet to false and firefox would ask which application to use, but I see no box asking me something appearing.

as of firefox 3.6 network.protocol-handler.external.* seems to no longer work

and 'reset' all other values to do with magnet.

once you click a magnet link you will be prompted to choose an application, navigate to and select /usr/bin/deluge

In Firefox go to Edit/Preferences/Applications, search magnet and set Deluge 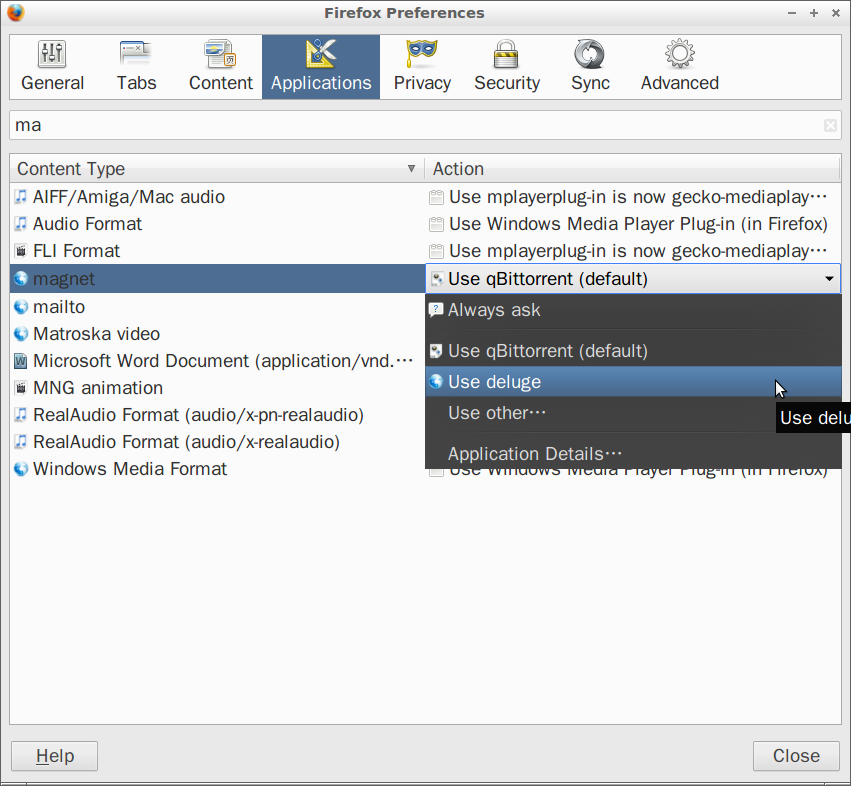 Instead of clicking on the magnet link in Firefox (which requires some advanced configuration to set up), right-click on the link and select "Copy Link Location". Then, move into your Deluge window, click Add Torrent (the "+" at the top-left of the window), and then click the "URL" button.

Happy torrenting, and remember to go for a 3:1 seed ratio!

in /usr/share/applications/deluge.desktop but also removing

hope this helps anyone with similar problems

Have you actually installed deluge? If not, open a terminal and enter this command. sudo apt-get install deluge When its done it should show up in the programs list.

The deluge.desktop file that's installed (in /usr/share/applications or similar) by the deluge package should already contain the

line that associates deluge with magnet links. However, in my case I found that for the system to pick up this association, I had to run:

If this command is not found, the package desktop-file-utils needs to be installed first.

Not the answer you're looking for? Browse other questions tagged firefox bittorrent deluge or ask your own question.