Greek characters displayed in some applications on Lubuntu 14.04

I'm loving Lubuntu so far, but I have been noticing certain problem with some applications, mainly VirtualBox.

Basically, even though my system is set in English (US) with regional settings in Spanish (AR), when I open VirtualBox it displays all the UI in Greek characters. Not in Greek, though -- it just displays the English text but using Greek characters. I have tried switching VirtualBox's language to Spanish and relaunching the program, and the same happens -- it displays the Spanish text but using Greek.

Here you can see what I mean: 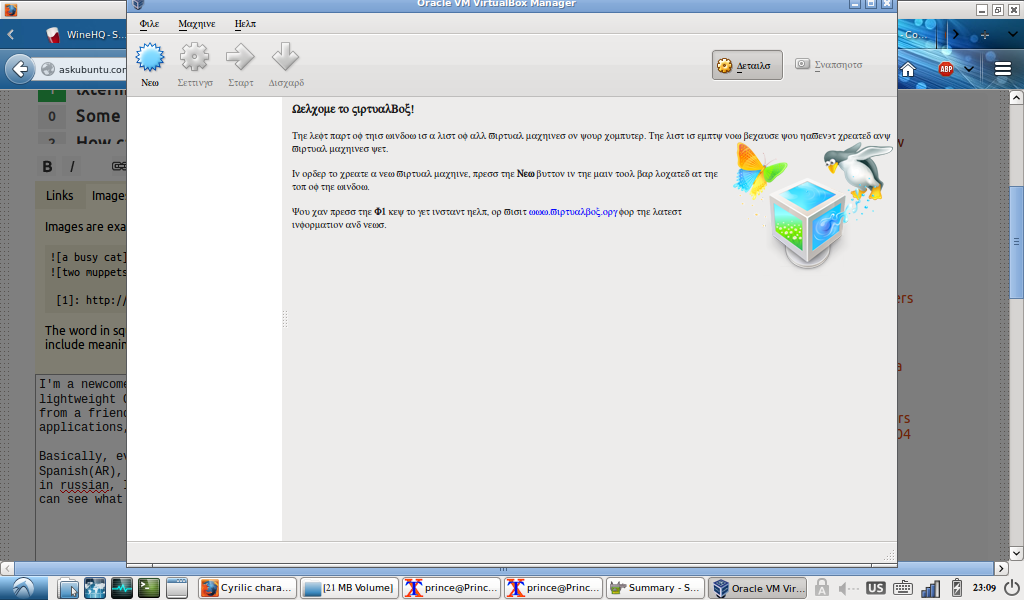 It also happened with other applications downloaded from the Lubuntu Software Center, such as Wine Launcher Creator. I guess it's an encoding problem? I tried googling it but all the answers I find deal with language settings, which clearly isn't the problem here, since the program is in fact displayed in the language I want -- it's the way the characters are displayed that isn't right.

Ok so, I tested installing VirtualBox on my main machine with Linux Mint 17 Qiana, and turns out the same happened, so I tried to look more in depth regarding what Gunnar Hjalmarsson said regarding "fonts for displaying cyrilic characters being used" and it turns out they were on the right path.

For some reason both in Lubuntu's and Mint's windows options I had Standard Symbols L as the default font for any text displayed system-wide, and that was causing the problem. I changed it to Sans which looks exactly the same but doesn't produce the same weird display of letters, and now the text is readable again.

Not the answer you're looking for? Browse other questions tagged lubuntu language or ask your own question.

2
How to change the date/time format to English, while preserving my own country's regional settings?
4
Swiss French Language support
0
Two languages mixed on interface Ubuntu 12.04
0
xubuntu, language support: cannot drag a language above “English” (which is the safe choice)
0
Change language output of Konsole in English
6
Can't change language back to English in Kubuntu 19.04