I installed Ubuntu to a 40 GB partition on the secondary drive.

I'm using these to give my son a play area and now I'd like to add one myself. Is there anyway to create another bootable installation of Ubuntu on the other 120 GB of that secondary hard drive.

Right now with the CD it tells me I must delete everything and start over , and even then I'm not sure I can create 2 bootable versions.

Any help is so appreciated !!!

Yes you can. Boot up the CD and go into live mode (try without installing), when the computer has boot up, go to the terminal and enter sudo parted -l get to partition table for the disk with the 120GB of space (we will continue this process later on). After this, begin the installation process. 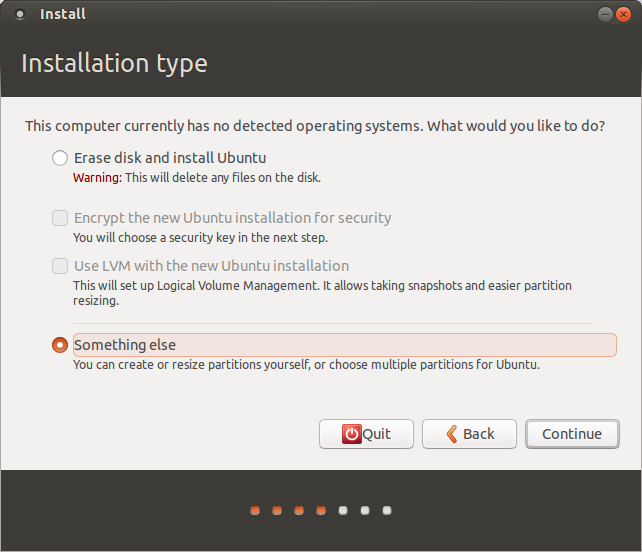 Now, on the next screen

Select the appropriate drive, (the one with 120GB which equates to roughly 122880MB) 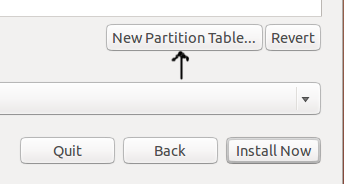 Mount point: none Type: no filesystem Description: the BIOS-boot partition contains GRUB 2's core. It is necessary if you install Ubuntu on a GPT disk, and if the firmware (BIOS) is set up in Legacy (not EFI) mode. It must be located at the start of a GPT disk, and have a "bios_grub" flag. Size: 1MB.

Mount point: /boot/efi (no need to set up this mount point as the installer will do it automatically) Type: FAT (generally FAT32)

Description: the EFI partition (also called ESP) contains some boot files. It is necessary if the firmware (BIOS) is set up to boot the HDD in EFI mode (which is default on more and more modern, > year 2011 computers). It must be located at the start of a GPT disk, and have a "boot" flag. Size: 100~250MB

The most basic and recommended partitioning for a fully functional system, is a swap partition and a root partition / consuming the rest of the diskapce.

For this I will recommend;

DiskSpace -The goal of this page is to offer advice and strategy on partitioning a Linux system.

Yes, you can definitely create as many Ubuntu or other Linux installations as you want. I usually make a copy of my old system before trying or installing a new version, so I can compare things or even go back.

I don't know why the CD would tell you you must delete everything and start over; I've never seen that. At what point does it say that, and what does it say exactly?

I normally create the partition(s) myself first, using gparted, and make sure I know where it is, how big it is, etc. Then, during the install, I choose a manual installation (with Ubuntu, it's called "Something Else"). I just tell it to install into the partition I created, and put GRUB into the MBR of the boot drive (assuming you are not using GPT with UEFI, something I haven't messed with myself). It should allow you to boot either of the 3 operating systems. If it doesn't detect the existing systems, then something is wrong - possibly a UEFI issue, which I don't really know a lot about.

One thing to be aware of is that with all linux distros I've installed, it will always change GRUB to point to the most recent partition's /boot/grub, and use that partition's GRUB menu for booting. So, if you delete the most recent distro, you will no longer be able to boot until you fix it by pointing the GRUB bootloader to a previous /boot/grub menu.

If you are using the GPT rather than MBR, then some of this will probably be different, and hopefully someone can help with whatever the GPT equivalents are.

EDIT: When you add partitions, you don't need to make them bootable; the disk is bootable. It boots and runs GRUB, when then knows how to load many of the operating systems, or it "chain loads" ones like Windows that have their own boot protocol.

Until you've done it a few times, it can be scary, and dangerous I guess. You need to pay attention, and not assume it will know what to do.

Not the answer you're looking for? Browse other questions tagged dual-boot or ask your own question.

1
installing 64bit 12.04 LTS along with 32bit window 7
0
What is the recommended disk partition for kubuntu 14.04 manual install and dual boot with Windows 8.1 64 bit?
0
How to move Wubi partition to a whole drive?
2
Dual boot Ubuntu and Windows 10 with GPT
1
Windows 10 disappered from boot menu