I ran an update today which included kernel updates. I left the screen for a while and when I came back all I see now is a black screen with white text containing call stack trace information scrolling up the screen (see image) which all seems to be different text.

This was happening for over 3 hours so I just rebooted. No harm seems to have been done but the updates did not apply.

I'd like to know what happened and why before trying to update again. 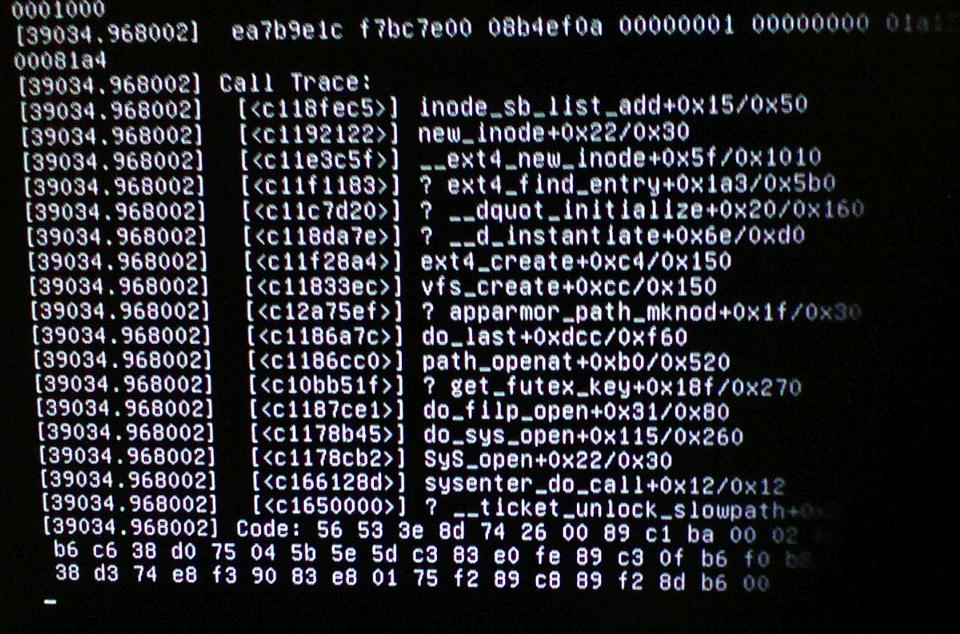 After you booted the next time, run sudo dpkg --configure -a and sudo dkms autoinstall in a terminal to resume your update.

It's pure speculation whether the error is related to the updates or caused by the changes introduced without understanding, the latter is more likely, though. If the kernel crashed you can't do much more as a user than cross fingers that the journal of filesystem will recover correctly. Those crashes are not supposed to happen on the stable release versions of Ubuntu if they don't occur in third party kernel modules (e.g. dkms modules)! You can send a bug report to the linux kernel developers by following https://www.kernel.org/pub/linux/docs/lkml/reporting-bugs.html. The handling of the information on the screen you see it described on http://users.sosdg.org/~qiyong/lxr/source/Documentation/oops-tracing.txt in detail.

If you want to get started to understand and debug kernel crashes, start by learning to read the stack trace, how to use the Linux Magic System Request Key Hacks (I listed some of them without explanation above) and how to set up the kernel to produce more logging information (see https://www.kernel.org/doc/Documentation/sysrq.txt for details) so that you can reduce the cause for the crash step by step until a reproducable test case. Then you can create accurate issue reports on http://bugzilla.kernel.org or hack the kernel yourself and populate the patch.

See also What is kernel panic?.

Not the answer you're looking for? Browse other questions tagged 14.04 kernel updates or ask your own question.

53
What is kernel panic?

1
computer freezes when logging in after updates
4
Can not connect to internet and turn off computer after interrupting system update
2
won't boot after 4.2.0-30-generic kernel update
5
Completely black blank screen after boot
2
How to update nvidia driver without causing a black screen?
2
kernel 4.18.0.11.12 trouble: Video black screen