Execute commands on a server running under a system account

I setup a minecraft server on a Ubuntu system. When I launch the server from the command line, the server listens to the standard input and responds to various commands (such as changing the game mode, difficulty level or time of day):

(See this demo of entering commands into the server console)

I don't like locking up my root user to run minecraft, though, so today I setup a system user named, simply, "minecraft":

and I'm using a config file to launch the minecraft server under that user:

I want to send commands to the minecraft server via the standard input, just as I'm able to when I launch it under the current user. I've tried su and sudo, but the first seems to be ignored and the second produces a "command not found" error. Since minecraft is a system user, I'm guessing that interactive login is disabled.

bodhi.zazen mentioned possibly "running in screen". I'd not heard of screen before, but it seems to have solved the problem.

and then started the minecraft server back up again (within screen):

I then used the standard screen shortcut to detach from the screen (Ctrl + a then just d). The minecraft server continues to run in the backround:

I can easily reattach to issue commands using screen -r:

I can end my SSH session without shutting down the server, then log back in from a different machine. For example, here I am logging back in using an android phone and JuiceSSH: 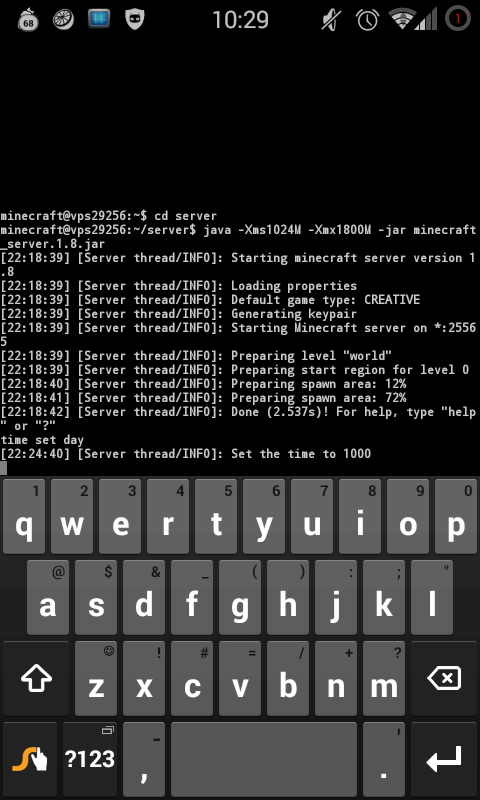 (noitce that you can see the commands I previously issued, since the screen was never terminated)

3
Is chroot the right choice for my use case?
2
How to boot as root without password on a headless Ubuntu 11.04?
12
Create a Screen session with a bash script using crontab
1
Is it safe to revoke group other access to every directory in a file system?
0
Need to create systemd file and failing