I tried to boot into Ubuntu live CD (try Ubuntu) and create RAID from: 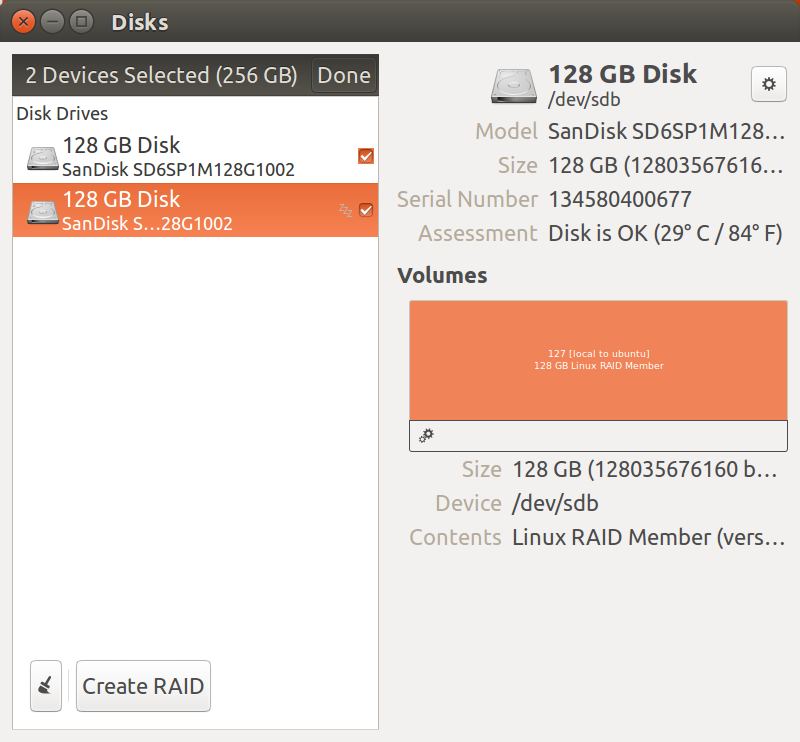 Then tried to instal uUbuntu, but it fails to install grub on RAID.

Another solution I tried is to install Ubuntu to one SSD, then boot from live CD and create RAID from disks app again, and it rsyncs disks, but after reboot newly created RAID array dissapears.

Is there any solution to setup RAID0 preferrably or RAID1 on my desktop?

Following Slimmons answer, I ended up with error after I tried to dpkg-reconfigure grub-pc: 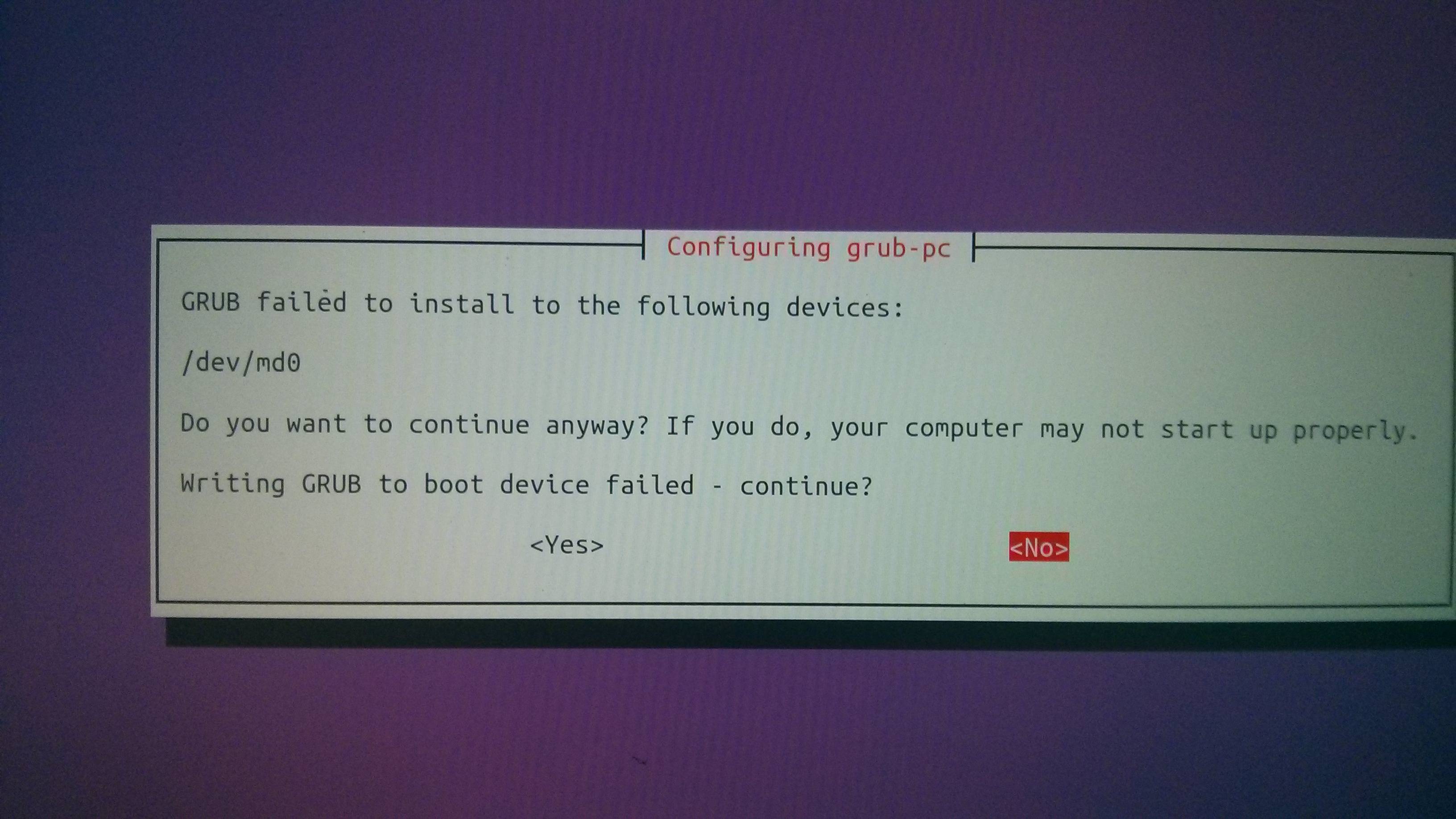 I also failed to do this from the first time because I was unable to install grub-pc package for some reason (could not resolve host...), so I just did it next time first.

Also, when I install Ubuntu on spare HDD, I create boot EFI partition as well, so it appears in fstab with UUID, what should we do with that?

Assuming I understood your question correctly, this should help. It was taken from here. and was originally written for Mint.

Install ubuntu on a spare drive

First, don't set any RAID options in BIOS. They're not needed. Set the ports to AHCI.

With all HD's connected, start the machine and boot into the Ubuntu you've installed on sdd. Install mdadm:

The install script will ask you about email. Choose "No configuration".

Next, setup the partitions:

Choose either of the two disks you want to RAID. I assume /dev/sda. Create an msdos partition table on /dev/sda. You'll find instructions here

I run without swap so I don't do this next step. Create a primary partition (instructions) and set it to a size equal to half your RAM plus half again just in case. Make sure the partition is marked as 'linux swap'.

Next, create a primary partition (I use the entire disk) on the same device and mark it as 'unformatted'. I don't see the point in partitioning a RAID0 set because if the array goes down you've lost the lot anyway.

At this point you have one device with these partitions: /dev/sda1 (marked as swap, unformatted) /dev/sda2 (unformatted)

Now, that last huge partition you created on /dev/sda2, change its flag to 'raid'(Instructions)

Apply the changes again then quit back to the terminal. Next, mirror the partition table from /dev/sda, which you just partitioned, over to the other disk in the RAID set, /dev/sdb:

Now we create the RAID0 set and capture the configuration information:

Next, create the swap and do the deed to /dev/md0:

Now we mount the RAID0 set. We'll use /mnt because Ubuntu uses /media and I don't want to go creating directories on your filesystem, so:

Now we rsync the current installation to the RAID set:

/ is the root of the Ubuntu you installed on the spare drive and booted to at the start of this tutorial.

Now we need to get the UUIDs for /dev/md0 (the RAID set), and for each disk in the set:

We have to do this because both disks in the set will have to be mounted before we can mount the RAID set. so, you should have a list that looks similar to this:

It might be easier if you open another terminal session and do sudo blkid there so you can see the information easier.

Now the tricky bit... your fstab will have a UUID for / (root). replace that UUID with the UUID listed above from the blkid command that belongs to /dev/md0. So, in my case I would replace the UUID for / with this:

Don't forget that that line above is my UUID, not yours. It's an example only.

Now we have to chroot into the Ubuntu we just copied to the RAID set so we can get it to boot by setting up GrUB:

Once you're in there, your command line prompt will change colour. Mine goes red.

A text-based dialog will open. Deselect the default entry and select /dev/md0. You do this by pressing the spacebar. When the RAID set has been selected, press tab then press enter on Ok.

If all went well, you can exit the chroot:

Shut the machine down and remove that spare drive you first installed to. Start the machine up again and you should see your shiny new RAID set announced by GruB as /dev/md0. You can breathe and smile now if you like, but with me being a grumpy old bugger I skip that last step and kick the cat instead.

There will be some minor housekeeping you'll have to do. I can't recall what it was I had to do. I think nemo complained. well, something did. All I did was point it in the right direction by setting the correct path. You'll know what I mean when the errors pop up. There's only one or two and they're minor, they're also due to the rsync we did, fyi. Once you've set the right details it should all run like a bought one.

Not the answer you're looking for? Browse other questions tagged grub2 raid or ask your own question.