I have used Windows 7 for a long time and thought to give Linux (Ubuntu) a try. I have two hard drives, one 120GB, other 1TB. First one is for OS and software, while the 1TB disk is for data and games. So I installed Ubuntu 14.04 on the 120GB disk (sda) and have done all those 10-things-you-should-do-after-installing-ubuntu. However, it did not want to mount the 1TB disk (sdb) at all saying that it's corrupted, but after two restarts it mounted (...?). I could access all my files but as a read-only disk. I installed GParted and got this message upon right-clicking /dev/sdb1 and selecting information:

Unable to read the contents of this file system!

Because of this some operations may be unavailable.

Since I've been tackling this issue for about 5 hours now, I have heard and came across ntfsprogs and ntfs-3g but have only succeeded in installing ntfs-3g. ntfsprogs refuses to install for various reasons, e.g.

What should I do? How can I make it read & write? It's an NTFS file system, but it's about 50% full and I can not lose that data. Is NTFS absolutely useless in Ubuntu (or Linux generally)?

UPDATE: Windows' disk checker said everything is normal, disk has been about 1% fragmented, and therefore defragmented, but nonetheless, the problem persisted. So I took a few days off to compress everything I had on it and transfered that data to cloud storage (Apple's Time Capsule) via Windows. I formatted the disk (to NTFS) and now it's empty and it indeed IS read&write in Ubuntu. But now I have a problem of being unable to access the Time Capsule from Ubuntu. I looked it up on the internet, but there are only solutions for earlier Ubuntu.

Ntfsprogs are included in the package ntfs-3g.

To install it run:

To repair the file system must use ntfsfix.

Ntfsfix is a utility that fixes some common NTFS problems.

Ntfsfix is NOT a Linux version of chkdsk. It only repairs some fundamental NTFS inconsistencies.

Below is a summary of all the options that ntfsfix accepts:

I had the same problem, one of my drives with NTFS format was not able to mount.

I ran the command below :

The result was shown in the below image 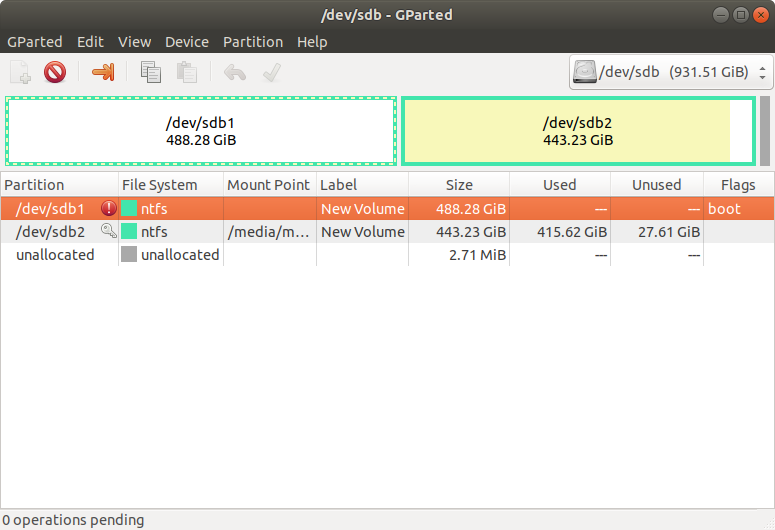 When I tried to mount it, this message was shown

Unable to read the contents of this file system! Because of this some operations may be unavailable. The cause might be a missing software package. The following list of software packages is required for ntfs file system support: ntfs-3g / ntfsprogs.”

After that I ran:

It worked for me

I had a similar problem. NTFS file system was showing an error suggesting me to use ntfs-3g. But that didn't help.

I solved it by the following way.

CAUTION: Be Sure to Backup the content of the partition before operation.

Create a Windows Live USB, then follow the prompts to open a command line. After that, you can run chkdsk /f from there.

Not the answer you're looking for? Browse other questions tagged ntfs gparted read-only ntfs-3g or ask your own question.

0
USB stuck in read-only cannot do anything