I know the program launchy from Windows (and it is also available in Ubuntu) in which I can simply enter 100/9.14 and get the result without opening a calculator. But I don't want to install the whole program just to do that...

Is there a simple command line tool I can use?

I'd start a python interpreter to perform such simple operations:

Please check this link for a list of python mathematical operators.

Use bc, it does exactly what you want and it also has some other features, like variables, configurable input/output base (great for converting hex/dec/bin and so on) and others.

The answer suggesting bc is certainly a good way to go. However, I like it even better with this simple wrapper, which I discovered quite serendipitously:

As you can see, the idea was taken from pbrisbin.com, which is a site packed full of great ideas like these. (His goodsong script, e.g., made MPD become at least twice as awesome....)

Once the window opens up, click the plugins tab and enable the Calculator plugin. 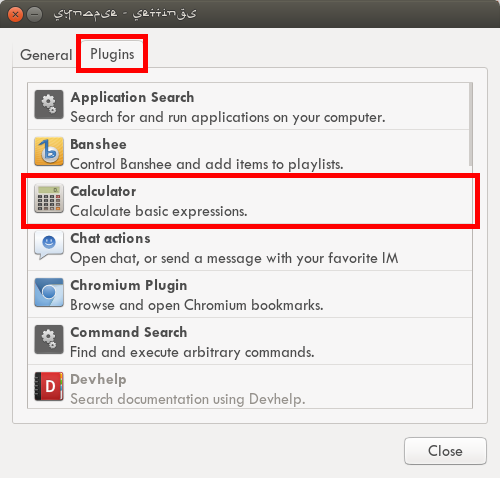 Once done, anytime you launch synapse using Ctrl + Space you can just start typing your calculation and the results will be displayed in realtime. 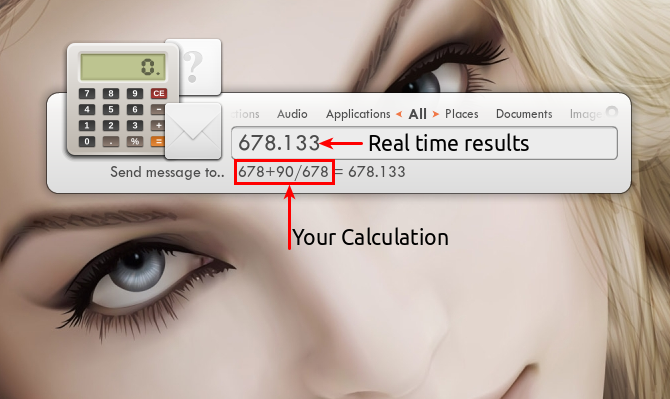 Not the answer you're looking for? Browse other questions tagged command-line calculator or ask your own question.

9
Keep calculator from opening a new window every time I press the “Calculator” button on the keyboard?
123
Any command line calculator for Ubuntu?
0
Lilypond install not working
3
GNU watch without erasing previous outputs
2
Simple dumb image viewer, with CLI access
0
Is there a calculator which supports arbitrary precision?
7
How to count the total number of files/folders on a system?
1
Executing simple aliased shell command without opening terminal