I have tried this on VMs and standalone machines and servers, and the problem is always the same. If I install Ubuntu 14.04 on a machine, and I update it to 14.04.1, the reboot takes a very long time (in the order of 10 minutes or so.) I removed the "quiet splash" on the Grub config, and then what I saw was that it was hanging on console stop/waiting etc. for a long time. Here's a screenshot (the garbled characters on the bottom of the screen was my failed attempt at screenshotting the problem on virtualbox VM. Note: I captured the problem on the VM, but I see the problem on standalone desktops and servers (14.04.1 installed on bare metal HW). The problem is an issue that Ubuntu should fix. 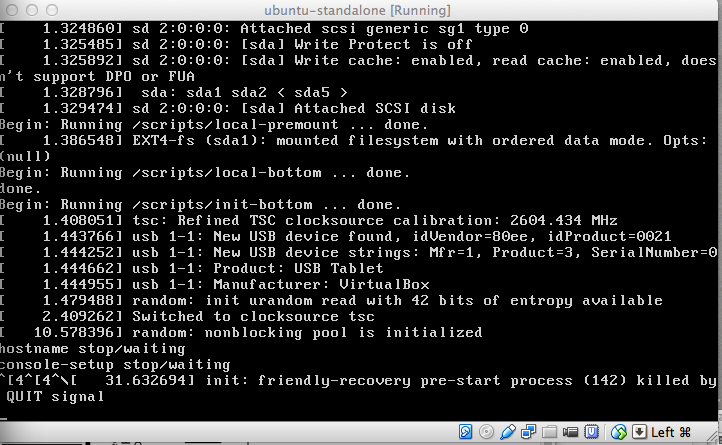 The next message I see on screen is 50 seconds later, plymouth-upstrart-bridge complaining (see screenshot below); and the following event logged is a good 40 seconds beyond that message. Something very bad is going on.

Does anyone know what the issue is? IS this something you have fixed? If so, where did you start? I am hardly a Linux/Ubuntu noob, but 14.04 is just about the worst OS I have installed in years. It is definitely not LTS material. 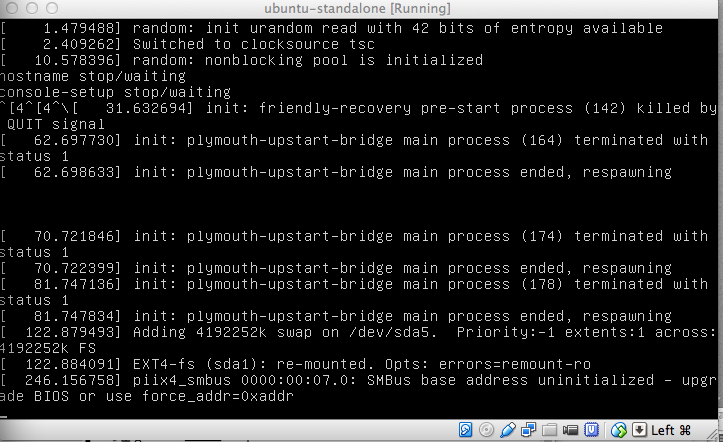 You can try removing peripherals one at a time until you get a suitable boot time, and then you will know what is causing the hangup. I once had an issue where my USB headset would cause me to wait an extra 2 or so minutes booting up, and once I removed it my PC booted fine. You might try looking through the boot logs to see if there is anything else that you may have missed.

Not the answer you're looking for? Browse other questions tagged boot 14.04 or ask your own question.