How to get GUI sudo password prompt without command line?

Currently, for all my commands that require root access, I have to type them out on a command line.

I would like for the GUI to prompt me to key in my password, when sudo is required, instead of having to type out the commands from command line.

Is there any way to enable this? Previously one version of Ubuntu desktop had this feature out of the box.

This version of Ubuntu (that I am now running) I upgraded from a server installation.

I will add, my user account is already added to sudo group. Thus I can run commands such as sudo gedit or sudo apt-get but I'm not able to install software in the Ubuntu Software Center.

You probably need polkit (a.k.a. PolicyKit).

Most graphical system administration utilities in Ubuntu, including the Software Center, can usually be run without sudo or anything quite like it. You just run them the same way you'd run any program.

When it comes time to perform a task requiring root privileges, they use polkit to perform the required actions. polkit is a separate mechanism from sudo, for allowing administrators to perform actions as root. It's installed on desktop Ubuntu systems but by default is not part of Ubuntu Server installations.

Thus the normal behavior of the Software Center is that you can invoke it simply as software-center, it will not prompt you to authenticate at that time, but then when you tell it to install or remove software, it will prompt you (graphically) to authenticate.

It sounds from your description like your system started as an Ubuntu Server system with no GUI, and then you installed a GUI. Probably the policykit-1

packages have not been installed. If you install the, polkit will most likely start working for Software Center and other such utilities.

Then you should be able to just run:

(Or select the Software Center graphically as provided for by whatever desktop environment you installed.)

This should fill in the various gaps, like not having polkit, that come with installing a more minimal GUI on your server system. On the other hand, if you prefer a more minimal GUI, you can just install those polkit packages.

For more information, see How do you run Ubuntu Server with a GUI?

If you really do need run commands as root but get a graphical authentication dialog, what you're looking for is gksudo (or gksu). This is provided by the gksu

package. It is a graphical frontend for sudo.

Typically gksudo is used to run graphical applications as root (or some other user besides the user launching them). But you can also use it to run non-graphical commands--provided the commands can be run with sudo.

You can run gksudo from a terminal but you don't have to. You can run it from the Alt+F2 (run command) dialog or put it in the Exec= line of a .desktop file (or any of the other ways you run graphical programs).

For more information on the problem with sudo for graphical applications and what to do instead, see:

gksudo works fine for running both graphical and non-graphical programs. You should probably use that.

But an alternative, using polkit instead of sudo and only working for non-graphical programs, is pkexec.

sudo vs. polkit (some technical details, only if you're interested)

A new gksu/gksudo will use polkit instead of sudo to do its work, though this version has not been widely adopted. I mainly bring it up to recommend the README file in its source code (written by Gustavo Noronha Silva), which explains the important differences between sudo and polkit. To quote from it briefly:

PolicyKit solves the problem of an application needing higher privileges by providing facilities to let users authenticate themselves and for applications to verify authentication and authorization information. The application has to be structured in a way that all privileged operation is done by a (preferably) small D-Bus service, which is commanded by the unprivileged code. All "actions" that are performed need proper authorization, which is handled through Policykit.

So, this essentially makes gksu unnecessary, since applications no longer need to run as a privileged user, and user authentication is done by PolicyKit's Auth Agent. But applications need to be refactored to adopt this new structure, and there are some cases in which what you want is indeed something that runs programs as root.

These issues underlie the situation I believe you're in:

A convenient way is to create a dedicated .desktop file, or add your commands to an existing one, asking your password via GUI (gksu). In the example below, I add the command to run Gedit and Software Center with sudo privileges to the Gedit launcher. You will need to have gksu installed to use this setup: sudo apt-get install gksu

Now you can run gedit and Software Center with sudo privileges: 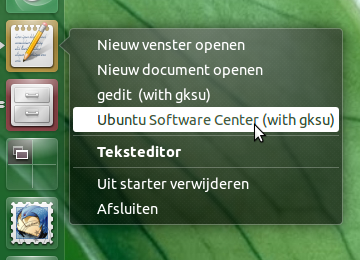 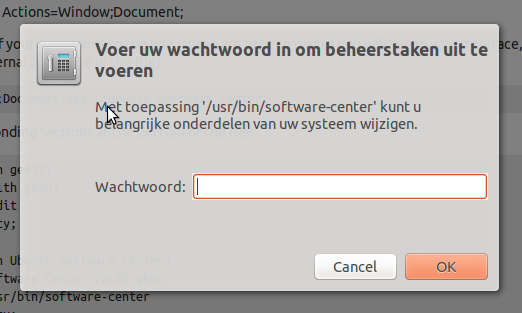 gksu has been deprecated.

It's been removed from Ubuntu 18.04, as well as Debian and other newer Linux distributions. If you do a web search with the phrase "Ubuntu man gksu", you will see there's no 18.04 version available. Here are alternatives:

2
Can I execute a program with a sudo command through a shortcut?
0
Run SH file, open dialog for sudo
1
Pass sudo command from GUI
242
How do you run Ubuntu Server with a GUI?
129
Why should users never use normal sudo to start graphical applications?
57
What is the difference between gksudo and gksu?
81
When to use pkexec vs. gksu/gksudo?
9
"Command 'gksu' not found" error on Ubuntu 18.04
10
Why is pkexec preferred over gksudo for graphical applications?
2
How to prompt for sudo password using GUI?
See more linked questions