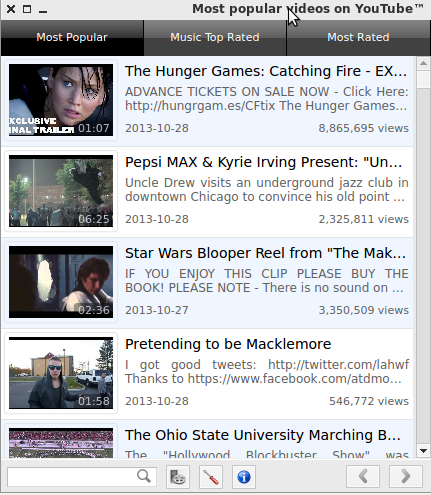 Although it is part of the SMPlayer project, it can be used with any multimedia player such as MPlayer, MPlayer2, VLC, Totem or Gnome-MPlayer.

I cannot add comments so I'm leaving this link here:

If this proves worth to you, I'll write out what it says in the link, in case the link dies.

Also, go through the man pages of youtube-dl to set various options like video format and video quality.

Technically you can't anymore. Those don't even work anymore; I tried them. YouTube changed things where it will be next to impossible to download without an approved browser with either a Flash player or HTML5 player, with your login cookies.

Be grateful they haven't started using IPCP such as Photobucket, which will block all Linux distributions except Android, but it's coming. Sigh. This is similar to HDCP where the video is encrypted and only an approved device (yes, it's Microsoft based) can display it, despite the fact, YouTube does not own any copyright and violates basic free use laws. In other words, the downloaded video will appear corrupted once downloaded. There might be "decryptors" in the future, but unlike DVD and Blu-ray players, new keys can be created and removed often enough to make it difficult to keep up.

Video download helper and other applications might still work with older videos on the server, but slowly scripts will be added to all videos in the database. Most videos cannot be downloaded at all from YouTube.

Not the answer you're looking for? Browse other questions tagged video or ask your own question.