This just recently started happening, and I'm not sure why.
Doesn't bother me too much, as I usually apt-get update/upgrade when needed, but it is kind of annoying.

Just curious if anyone has seen this, and/or knows how to fix this. 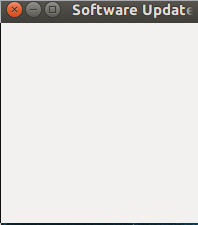 I had been having the same problem for a couple of weeks. I had not interrupted any updates, the only unusual thing I'd done was un-selected a suggested update (I think it might have been an update to bsdutils, since there as something that looked dodgy about it - some missing information about the proposed update). After that, each time a software update window appeared, it would contain just the title bar and border. I could resize it, but it was blank.

I did that, and it downloaded and update a bunch of stuff. I also had a reboot pending, but I chose not to do that.

None of the above helped.

I couldn't find the update process easily using ps, but did track it down via the GUI "System Tools" -> "System Monitor" tool. From that I discovered the equivalent command line: /usr/bin/python3 /usr/bin/update-manager --no-update --no-focus-on-map If I ran that, it worked normally.

However, I noticed that regardless of whether update-manager was visibly running (either the small blank window the system would occasionally produce, or a normal one if I ran it from the command line), that there was always an "Update-manager" process running.

Thinking that maybe some part of update-manager had somehow gotten "wedged", I selected it and chose "End Process", ignoring the dire warnings. From that point on, the problem of the small blank Software Updater window vanished.

I had this very same issue and as user75601 pointed out it seems to be caused by an orphaned update-manager process. You can quickly check from terminal with:

and can kill all the update-manager processes with:

Start the update manager as usual from Dash or Launcher and all should be normal again.

I had this problem today, after I forgot update-manager was updating my system and I logged out, aborting the update-manager. Upon logging back in, update-manager could only show a zero-size window, only the window border was visible.

I did have other issues, which I had to clean up using dpkg (you should google for any specific dpkg-related problems you might have, and fix them).
In my case, I had to remove a lock on and then 'sudo dpkg update' and 'sudo dpkg upgrade'.

Then I rebooted, and my update-manager was back to normal.

So I suspect that my update-manager was confused due to the invalid state that I had after aborting my software installation. I had to use dpkg to clean up and finish the pending installations and reboot. The reboot was probably necessary due to a kernel update.