What are the different parts of the system monitor, and what do they all do?

I know that there are the 3 tabs at the top, and there is the preferences menu, but what can each of these sections mean? What is Control Group, and why is it blank? There are a lot of fields that I can select and I wanted to know what each of them was. For example, why are there lots of processes with the same name?

Also, what is the setting for bits and bytes? I'm quite confused by that, as the graph just shrinks, and the numbers at the edge get bigger when I change it.

This is a topic that is very sparse, not just here but in general on the internet - I have done a lot of research but a lot of it has been fruitless. there is documentation about lots of programs, but not this one.

I know that this is a fairly broad question in some ways, but in others it is quite specific. It isn't a duplicate - there is almost nothing about the system monitor on the internet, never mind just here.

Apologies if it is too broad, suggestions as to how to make it better are appreciated!

This is a topic that is very sparse, not just here but in general on the internet. Please take any section of this to use in an answer - but a link back is appreciated :-)

The process name is the name of the process. Multiple processes can have the same name, but different process IDs. This is useful, as it means if you want to get rid of all your nautilus windows, you can execute a simple command:

and they will all be killed.

It can be sorted Alphabetically A-Z or Z-A.

This is the user that owns the task. By default, you can only see your own processes. To see those run by other users, click View (top, right hand corner) and then All Processes. Then it will show those owned by other users, including root.

It can be sorted Alphabetically A-Z or Z-A.

This shows the % of CPU being used by that process. By default it is divided by the CPU count (meaning if you have a dual core, and one process is using 100% of a single CPU, it will show up as 25%).

The ID field shows the identification number of the process. This is a unique number for each process and the only way of identifying identically named processes reliably. This is useful when you want to kill a specific process, but it has others with the same name:

The process identifier (normally referred to as the PID) is a number used by most operating system to temporarily identify a process. This number may be used in a command, allowing processes to be manipulated, such as killing it altogether.

This is the amount of RAM being used by that process.

This displays the priority of the app - how much CPU it is allowed to use compared to other processes. There are 5 options - Very Low, Low, Normal, High, Very High.

An app running with higher priority gets more access to cpu time as compared to an app running with low priority. This is primarily used to keep an app (like the Arista transcoder) from eating all of the cpu time and slowing the system to a crawl, OR, for allowing one app to suck up as much CPU as it can regardless of the consequences.

This will either be Sleeping or Running. Most of mine are sleeping.

Virtual memory is a memory management technique that is implemented using both hardware and software. It maps memory addresses used by a program, called virtual addresses, into physical addresses in computer memory.

This shows how much is being used by each process.

This relates to physical memory.

This is simply the time date started. This can be useful for seeing when you started an application, but also when you booted your machine up - if you sort it, typically there will be a whole load with an identical time at the top. That is pretty close to the time you turned it on (for this to be precise for the start up time, you have to have enabled See All Processes).

This can be sorted from Most recent to Oldest and Oldest to Most recent.

This is simply the Priority, expressed in a numerical format. It has more precise control over it (-20 to 19 has 40 options, where as Very How to Very High has 5).

'nice' refers to the priority the process gets on your CPU. This is a number in the range of -20 (highest priority) to 19 (lowest). You'll probably find that most applications you're running are at nice '0', which means that they are running with normal priority and none will get preferential treatment by the scheduler over another.

This is the command that is run to start the application. Typically it will display the path to the executabe file.

For example my processes named Chrome were all launched with

The waiting channel is the place in the Kernel where the task is currently waiting. A task has to wait for resources, which can be data or processing time. Those include network sockets, hardware, files, and so on; since most of them are just files, in Unix-like systems.

What is the "Waiting Channel" of a process?

Google doesn't know, and this is completely blank for me so...? 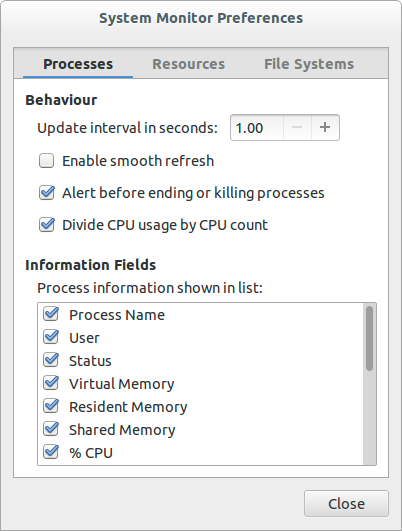 This is the preferences window on the processes tab. It has 2 main sections, Behaviour and Information Fields (Columns)

I can't see any difference, however it may be to do with the animation of the processes, i.e. they slide, rather than jump?

Alert before ending or killing a process.

When enabled, when you try to end a process, this dialogue is triggered, to prevent accidental termination.

This also affects the CPU graph on the Resources tab.

With this you can select which fields to be shown. By default only Process Name, User, %CPU, ID, Memory and Priority are shown.

This will show you the percentage of processing power being used right now, and for the last X seconds, per processor. The amount of time is shows for is dependant on the refresh rate. Each line displayed is one of your CPUs (if you have a Multi-core Processor). Each core has it's own trace.

Below the graph are boxes. They are coloured the same as the graph lines. The number of boxes corresponds to the number of processors you have. Clicking one will bring up a colour selection window. There are some default colours, and you can create a custom one. Next to each box is the percentage of that processor that is being used.

The top of the graph will always be 100%

This will show you the percentage of memory and swap being used now, and for the last X seconds. The amount of time is shows for is dependant on the refresh rate. A line is displayed for the Memory (Purple - AB1852 by default) and Swap (Green - 49A835).

Below the graph are segmented circles. The amount filed corresponds to the amount used. They are coloured the same as the graph lines. Clicking one will bring up a colour selection window. There are some default colours, and you can create a custom one. Next to each cirlce is the percentage of that resource that is currently being used. The centre of the circle is always coloured in, even if it is 0%.

The top of the graph will always be 100%

This will show you the amount of data uploading and downloading right now, and for the last X seconds. The amount of time is shows for is dependant on the refresh rate. A line is displayed for the Receiving / Download (Purple - 2D7DB3 by default) and Sending / Upload (Green - EE1D00).

Below the graph are arrows. They are coloured the same as the graph lines. Clicking one will bring up a colour selection window. There are some default colours, and you can create a custom one. Next to each arrow is the amount being uploaded / downloaded right now. This can be used as a pretty accurate download speed tester. I normally run apt-get update to get a good measure. And below that is thr total Downloaded / Uploaded since the last restart.

This is the preferences window on the resources tab. It only has 1 main section, Graphs. 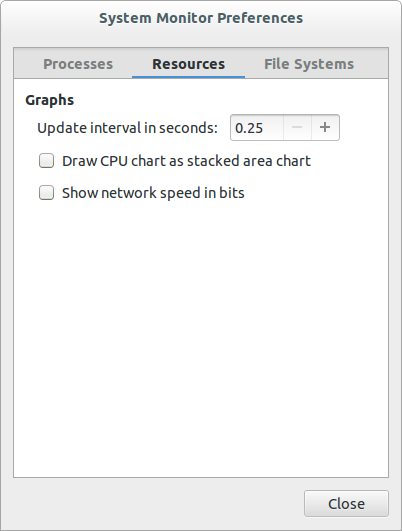 This value affects all the graphs.

This affects only the CPU graph. It will change it from the line graph formatting to a filled area graph. I don't see the point, but someone who doesn't get computers says that it "Looks prettier", so it does have a use - entertainment.

A lot of people don't realise the difference between bits and bytes.

A bit is the basic unit of information in computing and digital communications.

The byte is a unit of digital information in computing and telecommunications that most commonly consists of eight bits.

So that means a 10 byte file is 80 bits. And a 1 KiB/s (1 kilobyte) internet connection is 8 Kbit/s (8 kilobits) (and useless). Because of this, you get a difference in how they are compared.

In reality, you have a MiB (Megabyte) connection, not a Mbit (Megabit). But, in order to make it look like more ISP normally advertise their speeds in Mbits. If we use my connection as an example - it is currently 680 KiB/s (which sounds quite bad, and, to be honest it is). But in Bits, it is 5.31 MBits/s. That sounds much better! (To convert between the two, just times the Mbits/s measurement by 8, then convert between KiB/MiB if necessary with * or / by 1024.

This feature lets you switch between which one you want. Most speed tests are in Mbits, so this can help confirm that.

This tab simply displays all of your file systems and details about them.

This is the name of the device. When it has no name it displays as the mount point. So for example my HDD is called /dev/sda2

This is where the device can be accessed. So for example my HDD's Directory is /, and my external HDD is /media/tim/Big.

This shows how it is formatted. So for example my HDD is formatted as EXT4 and my external HDD is fusebl (whatever that is).

This shows the total size of the disk. So for example my HDD is 1.7 TB (Terrabytes - it used to 2 but it's been partitioned), and my external HDD is 500 GB.

This shows the amount of free space on the disk. So for example my HDD has 852 GB free, and my external HDD has 71 GB

This has 2 sections, Behaviour and Information Fields. 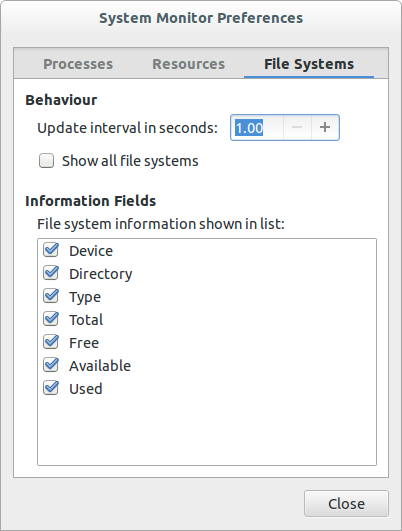 When ticked this shows all file systems, not just the /dev/sd*X ones.

With this you can select which fields to be shown. By default all of them are shown.

That is a summary of all of the features of the software centre.

38
What is the "Waiting Channel" of a process?
25
What does 'Nice' mean on the processes tab
11
How to set a memory limit for a specific process?
2
How do priorities work on ubuntu's 12.04 system monitor?