Once upon a time, when I installed Ubuntu 10.x on an older machine, and kept upgrading it until 13.04 or 13.10, there was an easy-to-find option in Settings that allowed to install NVidia's proprietary drivers and keep them up to date (or not, because sometimes they released a new version with a bunch of awful regressions).

Now, when I installed 13.10 on my new laptop, which I then upgraded to 14.04, I haven't ever been able to find that option anywhere.

An attempt to install nvidia drivers with apt-get dont-remember-what resulted in a screwed up system that wouldn't properly start Unity (or even xorg, not sure), roughly equivalent to an unbootable system. But I managed to revert that.

I seem to understand that there are some sort of opensource drivers called "nouveau" that come by default in Ubuntu which kind of provide an alternative to NVidia's proprietary drivers. Is that so?

You simply need to open the setting menu for ubuntu, Click "Software & Updates".

Select the far right tab "Additional Drivers" and wait a few seconds for Ubuntu to build a list of drivers you can use. 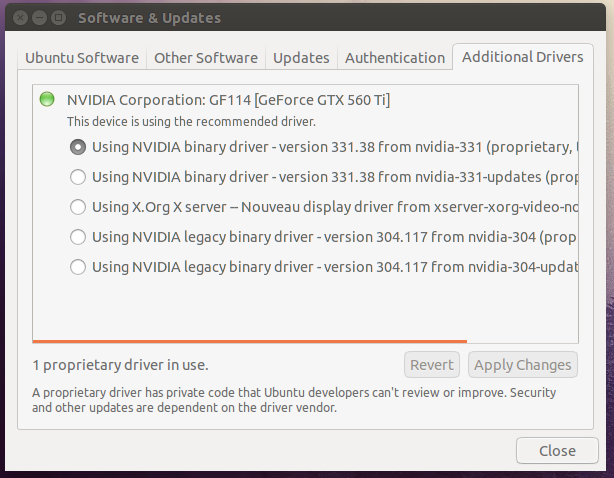 Note: you may see different drivers than me.

Make sure to pick the one that has the message (proprietary, Tested) next to it.

Once Selected click "Apply Changes" let it do its thing and reboot.

This is the safest way I have found to do this without my system losing X11 after an update or upgrade. Some Desktop environments perform better under the opensource driver while others you can see little difference. I have noticed with unity on ubuntu that the minimize animation can sometimes show some artifacts while using the Nvidia Driver, but other than that it performs much better in all other respects.

Not the answer you're looking for? Browse other questions tagged drivers nvidia nouveau or ask your own question.