The network manager nm-applet has disappeared from the unity panel of my Ubuntu 14.04. When I try to run it from the commas line, I receive an error:

I do not know if it is directly related but ever since this, running System Settings-> Network does not display 'Mobile Broadband' even though the datacard is connected to the system. The datacard does not work any more.

EDIT: The following command as suggested by user 'mkayaalp' also gives an error:

P.S.: Searching on google and on askubuntu.com mainly brings up results regarding Lubuntu 14.04.

I'm afraid both messages look unrelated to your problem with Mobile Broadband connection.

simply means that a Gnome Panel was not found and it is using the status icon instead.

This message means that it tried to get the version of the Gnome Shell from DBus but failed for 5 attempts. On my system, there is no org.gnome.Shell service. But you apparently have and there is something wrong with it.

One thing you might want to try is running it as:

This should remove that second message, but I doubt it will resolve the broadband issue.

EDIT: I should mention that both these messages are not errors.

The following means that SIGINT was delivered and applet is exiting, which is what happens when you hit Ctrl+C in the terminal.

For next message, see this bug. It is GLib warning and not an error. nm-applet gives the same messages on my system (except for the dbus related message) and it works.

Since you say the same thing goes for psensors, I am convinced that your problem is not nm-applet. It looks like your systray is missing. Try to run the following minimal python script for creating a status icon and see if anything shows up:

Put this in a file and name it test.py. Execute chmod +x test.py and ./test.py. You might need to install python-gtk package, if not installed.

nm-applet disappeared from the Unity menu bar on a recent install of Ubuntu 14.04.1 LTS. This may have happened after an apt-get upgrade and a reboot.

The solution that worked for me was mentioned in the comments of another post.

Some people resolved similar issues by installing/reinstalling libappindicator. I guess Unity moved from status icons to indicators. – mkayaalp Aug 16 '14 at 18:35

Since it worked for me, I thought I would make a separate answer for it. I ran the below:

Then I rebooted. It may be that only the first package re-installation is necessary.

followed by a logout and then a login. In fact, many other notification area indicators were missing (not only nm-applet), and this fixed them all.

When searching for nm-applet on google, I found https://awesome.naquadah.org/wiki/Nm-applet. After adding my user to netdev group I'm able to start nm-applet in terminal and the icon appears.

Tried to reset the default nm-applet.desktop autostart and restarted, but nothing. Finally added a custom startup application to execute /usr/bin/nm-applet.

Hope this helps somebody.

The network-manager or the nm-applet is the one which is found in the systray. I used this page https://help.ubuntu.com/community/NetworkManager#Installation and did the following :

logged out, then logged back in and the icon in the systray shows and wifi and networks report.

To confirm network is connected, run :

Also, I got rid of the gnome staging and gnome next ppa(s).

For Ubuntu 14.04 I reinstall network-manager, and everything now works fine.

Add the notification area to your panel. You do so by right-clicking on the panel, "Add to Panel..." and choosing Notification Area: 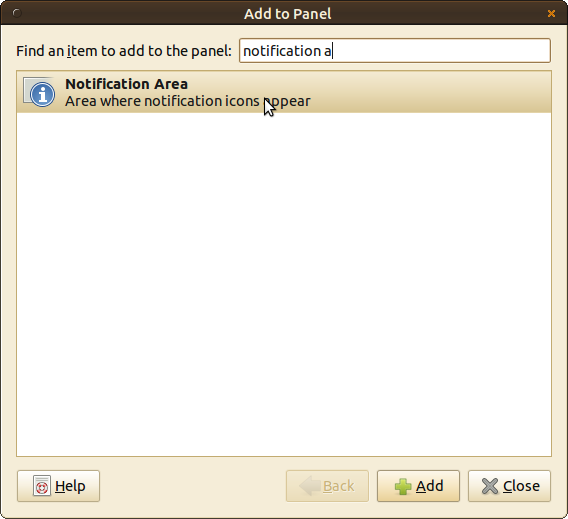 This gives you the network manager applet (nm-applet), the sound / volume chooser and the battery indicator.

3
Gnome indicator applet not showing same items on two computers
4
I need a netspeed-applet like indicator
18
Is an Internet connectivity indicator applet available for the Unity panel?
9
Download/upload speed indicator applet for 14.04
1
Extra items in panel after installing xubuntu over ubuntu
3
Network indicator missing in ubuntu 14.04 64 bit
3
nm-applet disappeared from top panel Ubuntu 12.04
1
Unable to connect to the internet, Network menu has disappeared
0
nm-applet running, indicator not in taskbar- new behavior in 16.04