Is it possible to hide the “Copy To” and “Move To” context menus?

I've just read this question and realized that I had never used either the "Copy To" or "Move To" context menu - is it possible to hide them? 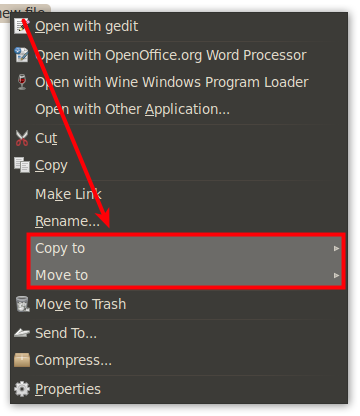 It is unfortunately not possible to do this in either 12.04 or 12.10, because of the changes to Nautilus and the removal of /usr/share/nautilus/ui/nautilus-directory-view-ui.xml. It has been asked very recently (June 2012) in the gnome nautilus mailing lists, and it is clear from the developers' responses that one would now have to download the source code, patch it, and then recompile it to eliminate or hide the copy to and move to menus.

Emmanuel Bassi, a gnome developer, responded to the same request on the mailing list by noting that:

The UI definitions are part of the application: modifying them is the equivalent of modifying the binary on disk.

In another response, Emmanuel goes into more detail and points out that:

Given that editing the UI file once installed was never a supported action for the reasons I pointed out in this thread, this is not a break in functionality.

What you want to achieve cannot be done with the current, or any future, version of Nautilus; the only way to do it is to actually modify Nautilus so that it can do what you want.

This is the official position on Nautilus, and so the only thing to do is to suggest a patch, or simply prepare your own patch and build your own custom version. The source code that you need is available from the git repository.

There is no dirty 'hack' that can accomplish what you want at the moment, as the developers have explained. It may change in the future, but this is the current state of affairs.

and find the last instance of this:

That should solve your problem.