I've installed vundle on my ubuntu box but when I load vim none of the plugins load. My .vimrc from my home directory [some commented lines edited out]:

I haven't changed any other settings, this is my first attempt at using Vim plugins. Vim loads looking like this... (default vim) 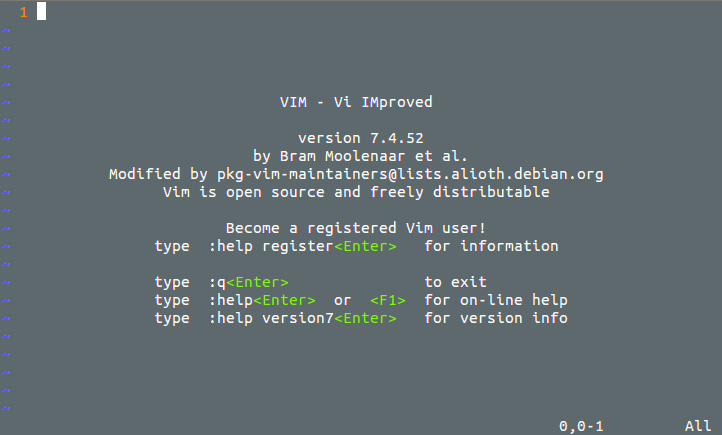 Your plugins may be loaded, but just not have a visible effect by default.

For example, the line

loads the vim-airline plugin, but you will not see the fancy status line until the status line is shown for some reason. (The bottom line in your screenshot is not the status line.)
The status line get's shown if there is a split window, or if the laststatus option is set to show it allways.

Try adding this line to your .vimrc to show the status line by default.

(According to the comments, this solved the OP's issue)

If you made sure you configured your plugins to actually have some visible effect, and still think it's not loaded, use the following command to list all script files that have been loaded in the current instance of vim:

That shows a long list of files. If a plugin is loaded, you will see one or more files with names related to the plugin's name.

Not the answer you're looking for? Browse other questions tagged gnome-terminal plugins vim vim-plugin vimrc or ask your own question.

0
Plugins not getting updates
3
How do I use plugins in the vim-scripts package?
4
RipOff 0.8.3 not finding ANY plugins
1
How can I create help tags for vim plugins from packages?
1
How to install Emmet (or any web development Plugins) for vim editor
0
VIM,Vundle, You Complete me
2
Vundle installation fail?
1
vim plugins errors
0
Ultisnips not working
2
Vim Vundle not allowing plugins to be installed due to errors