I'm using 10.10 and I need to run a script in order to get a windows-like international keyboard layout - basically, it changes how dead keys work.

(Original script from this page http://t.tam.atbh.us/en/win-us-intl-4-linux/ )

Since I can't seem to manage to get it going from boot, I have to run a custom script to launch any application.

So if I put abiword in the application_name, it runs abiword respecting the keyboard script.

Ideally, the original script would start at boot and then any applications I use would function with it - just like what happens if I run it first in Terminal (without the app_name line) and then run apps from it. I tried to make the script run from boot by adding it to /etc/rc.local but to no avail. Tried to add it to init.d but that also didn't work.

If anyone can help, I'd be most grateful.

You should be able to add the script using "Startup Applications" (just search for it with unity). 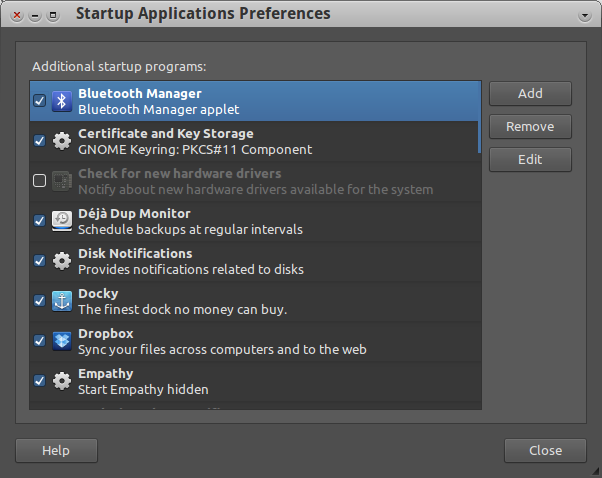 *edit: Saw you were using 10.10. You should still be able to use "Startup Applications", but I think you can find it in system > preferences, since you probably don't have unity.

I'm not 100% sure this will work but you could try creating a file called .xinitrc in your home folder with the contents:

then making the file executable and restart, chooseing 'User Defined Session' when you log in.

Add least the xmodmap part can be solved by putting it in the file ~/.Xmodmap (just the string content without the xmodmap -e'...'). Gnome and XFCE4 should parse the file on startup.

1
launching a script at ubuntu start up
0
How can I make a command execute at startup?
11
How to make a sound effect play whenever I click?
0
How can we setup Startup tasks

3
init.d script startup problems
1
Sudo and startup script
2
Script not running at startup
3
Running key remap script at startup
0
startup script ubuntu 12.04
1
How to add a runonce startup script?
2
How to Start Program After SSHD is Up and Running
7
Startup Auto-Execution Bash Script