How do I install the latest version of node.js?

How do I install the latest node.js on Ubuntu? I've been looking around, and I can't find anything. Is there a Ubuntu package for node.js, or do I have to compile it myself?

Then, you will have the latest version of Node.js.

If you're not a fan of curl <url> | bash -, or are using an unsupported distribution, you can try a manual installation.

Node is one of the easier projects to build. Just change the version as that continues to change.

Browse to http://nodejs.org/dist/latest/ to find out the latest package version.

Yes, go to Synaptic, search for "nodejs". The packages are located in the universe repository. I suggest you install all of the packages starting with nodejs if you are doing development.

Just in case that doesn't work:

That will download the sourcecode of node.js, make it and install it.

Since the sourcing has to be done for every new shell, you will probably want to add the following to your .bashrc:

We can easily switch node versions with:

As this question has the word latest and NodeJS latest release version is now v0.12.2 (as of today) and if you want to install this version you need to run following command

NodeJS released v5.8.0 and I still found no ppa to install yet. So I install it using NVM as follows

Update 2: For those who prefer PPA 😃

See this SO question for a comparison of NVM and N.

Generally speaking, loading arbitrary data from a URL into a root shell session is not a good idea and I wish people would stop peddling it as a solution for everything - "Please just run this script I'm sending you, and also while we're at it - I have a bridge you'd probably be interested in purchasing".

As an alternative, here's the "Ubuntu Way" of doing the same - this is basically everything the Node Source script is doing automatically, but here you can see how the system is being updated and know what repos and what keys are added to your system configuration:

This is for the latest (at time of writing) Nodejs version 7. For the LTS version (6), the repository URL you should add is https://deb.nodesource.com/node_6.x. Other versions can also be gotten with a simple change to the repo URL - consult nodesource.com documentation for details.

Note that if you are using an alternative Ubuntu distribution such as Trisquel, the $(lsb_release -sc) command may not work, so you'd have to replace it with the compatible Ubuntu version name, for example xenial.

answer for @jrg is correct, But Chris Lea's Launchpad PPA will will not be supporting Node.js v0.12 and beyond. So to install last version for Node.js From new nodesource PPA according to post in nodesource Blog And joyent/node

you nedd to run command:

you nedd to run command:

The easiest method to install Node.js on Ubuntu is to use the snap package. Just search for node on Ubuntu Software store and install the first one. 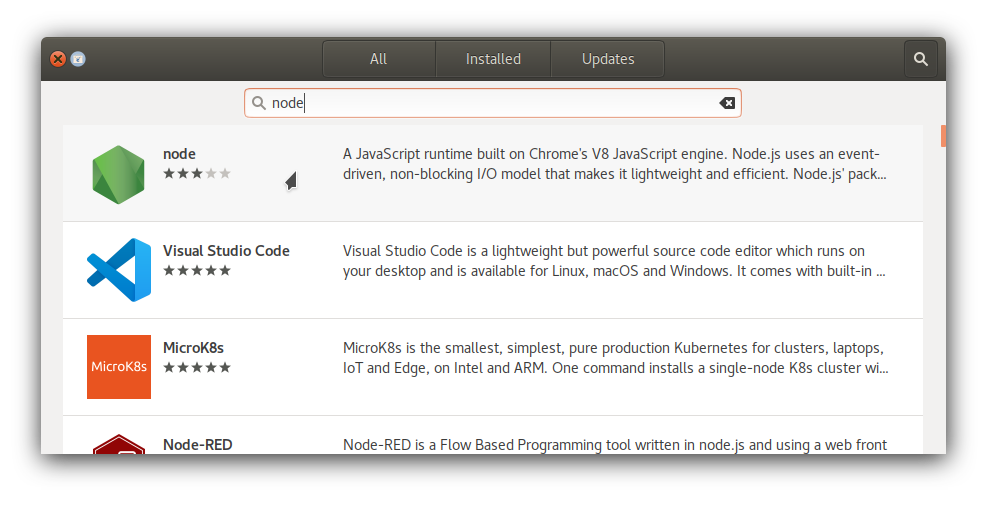 Or if you prefer command line:

If you can't use snaps for some reason, like from a WSL environment, Node Version Manager (NVM) is the way to go. It's safer than upgrading the node packages in Ubuntu to unsupported versions from PPAs or 3rd party repos, which may cause conflicts or breakages in apt package management system. Compared to NVM, manual installations from tarballs are harder to maintain and upgrade. Follow these steps to install the latest node using NVM:

If everything went well, you'll see the latest node and npm versions as output. That's all, node is installed and ready to run! 😊

I am always leery of using a non-official PPA - it usually works out, but I like there to be some level of official association between the distribution channel and the project that I am using...

Personally, this is the best bang for my buck when it comes to a resource for the many good ways to install Node - https://gist.github.com/isaacs/579814

Here's a solution that checks the md5sum once and compares it to the downloaded file, with an option to delete the file if the md5 sums don't match. It should address the safety complaints from Arda's answer.

Node.js is available as a snap package in all currently supported versions of Ubuntu. Specific to Node.js, developers can choose from one of the currently supported releases and get regular automatic updates directly from NodeSource. Node.js versions 6, 8, 9, 10, 11, 13, 14, 15, 16, 17 and 18 are currently available, with the Snap Store being updated within hours, or minutes of a Node.js release.

Node can be installed with a single command, for example:

The node snap can be accessed by the command node, for example:

An up-to-date version of npm will installed as part of the node snap. npm should be run outside of the node repl, in your normal shell. After installing the node snap run the following command to enable npm update checking:

Users can switch between versions of Node.js at any time without needing to involve additional tools like nvm (Node Version Manager), for example:

Users can test bleeding-edge versions of Node.js that can be installed from the latest edge channel by switching with:

This approach is only recommended for those users who are willing to participate in testing and bug reporting upstream.

I was recently installing a utility via NPM when I learned that my version of Node.js itself was out of date. No worries -- simply upgrade my Node.js install and move forward. Of course I could just hit nodejs.org and get the new image, but figured there had to be an easier way. It turns out there is -- you can upgrade your local Node.js with NPM:

And adding to PATH, example (for Ubuntu)

Fortunately there is a very easy way of managing your node version, using the Node binary manager module ‘n’.

1: Check your current version of Node.

4: Upgrade to a later version (this step can take a while) You can specify a particular version like so:

Or you can just tell the manager to install the latest stable version like so:

5: Check the running version of Node to verify that it has worked:

If the version doesn’t number output in step 5 isn’t what you were expecting.

Step 2-: Compile and install the nodejs.

Note-: If you found error “make command not found”

Here are the commands

3
Why an old Nodejs version is installed on my Ubuntu machine
2
Unable to compile 'syllable-5.0.0' (tar.gz) because node is not 12+
-1
Can't install any version of nodejs >10 (10,12,13) in my lubuntu
1
Not able to install nodejs in ubuntu command line
0
Installing Current nodejs version
0
what's the canonical way to install nodejs on an Ubuntu desktop (21.x)?
0
How to install downloaded app?
0
Problems with basics
0
How to install Node.js v12.x:
0
Problems installing Nodejs as a tarball
See more linked questions