Can I put two chrome (different users) on my launcher?

On Ubuntu, I also created two users and I setup my accounts. But I can't create two "shortcuts" on launcher for each user. Is that possible? Today, on Ubuntu, I have to change between the users directly on chrome. I am not complaining about this, but I am used to have more chrome shortcuts.

I can also get used in Ubuntu is this is not possible.

It is quite simple to do this in Windows but not the same in Ubuntu.

For Ubuntu, I found two ways. Personally I recommend method 2 because you don't need to install anything. It also allows you to access the second profile from "Activities" (Ubuntu) without using any commands.

Please note that either way you choose, you have to know YOUR_PROFILE_NAME.

YOUR_PROFILE_NAME is normally Default for the first profile you created. The second profile is named Profile\ 1. The third is Profile\ 2, and so on (You can also give custom names for profiles). You can identify which profile is currently loaded by opening chrome://version inside Chrome and looking at Profile Path.

This is what I did to achieve the same thing:

to create the first "Application Launcher" with the Command:

Then drag the icon created from the desktop to the launcher. Repeat for the Profile 2.

All the other answers have a caveat: the shortcut will open tabs or new windows and group them with the official Google Chrome shortcut.

I wanted to make the new shortcut to open windows in its own icon, so I can place both icons in my dock and easily switch between the different Chromes.

I discovered that you basically need to use the flags --class and --user-data-dir to Chrome's executable.

So I wrote a script to make this automatically and if you want to try (don't worry, it won't perform any action before you confirm -- unless you use --force), just run:

If you want to know more about it, take a look here.

The only caveat is that since it uses --user-data-dir instead of --profile-directory, the new Chrome instance will act like a fresh new. This is needed because of this bug.

In the end, you'll end up with something like this:

The section [Desktop Entry] find the option Actions= and add your new action (use semi-colon to separate and at the end):

Create a new section with the same name given on the action above. The Name is the submenu item that will be shown.

The "Profile 1" must be the same as you get on the chrome://version/ (use it on the URL using the desired profile to configure) in the line Profile Path. 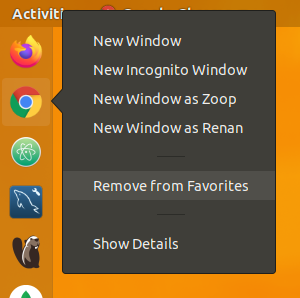 Here's how I did it in Linux Mint, which is based on Ubuntu:

Once Chrome is installed, copy the Chrome launcher icon to the desktop by right-clicking the Chrome icon in the 'start' menu and then selecting 'Add to Desktop"

Since you want at least two Chrome profiles that can run at the same time, duplicate the new desktop launcher icon again to create two launchers. Do this by simply right clicking the new Chrome launcher/icon on the desktop. Right click and click copy. Then moving your mouse over to a blank area of the desktop and click paste. You now have at least two Crhome icons on your desktop.

Repeat the process and edit the second icon's launcher tab to say:

You'll want to rename each launcher/icon so you know which profile you're going to open up when you double click on it. Since one is for work and one is for home, I named them, very creatively, Chrome Work and Chrome Home. I renamed them by right clicking on each launcher icon and then clicking 'Rename'. You can also do this in the General tab on Mint when you are in there creating your profile on the Launcher tab.

One person replied that it looked like a whole new fresh install of Chrome, because he was missing his customizations (American spelling), I imagine. It seemed to confuse him, but that is because the original profile was stored in the default location and now the new profile folder/directory is blank. Since I already had Chrome installed, and a profile was saved to the default location (/home/mint/.config/google-chrome/Default), I deleted everything out of the default location. I then created my separate profile folder location and created the corresponding profiles as laid out above. Then I signed into each with different accounts.

This is my preferred method of using multiple profiles on Chrome, because I have to do no account switching, not adding of accounts. Each operate as if they were separately installed instances of Chrome - like you had Chrome on your system twice. You can also do this with portable versions of Chrome on Windows, Linux and I bet on on Mac. Problem is, you can't easily update a portable version of Chrome, at least not the ones I've used.

There is a very similar method to create multiple profiles on Windows. I found it only once years ago and I thank goodness I saved my notes. It also involves setting up multiple launcher icons on the desktop, or wherever you'd like, going into the properties on those icons and directing Chrome to put the profile information in locations you specify. The '--user-data-dir=' in the run command is the same in both Windows and Linux. I can't speak to Mac, but since BSD (Mac) and Linux are far more similar than not, in my uneducated opinion, I wager it works the same.

Create your chrome profile folder. (You may also place them elsewhere, and ln -s them to here)

create a start file in /usr/bin:

(personally, I'd chuck in a --disable-session-crashed-bubble, too) and enable it for execution by regular users:

Now you can create a link to the start file: 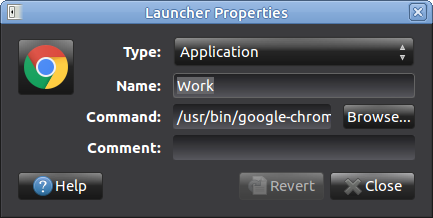 You can click on the icon to change that.

... or also conveniently call the different flavors from command line:

We can create multiple user data profiles using this approach.

4
Is it possible to install an app from Google Chrome Web Store like Angry Birds so that it is available to all users?
1
Looking for a button or shortcut for accessing Google Chrome's Create Application Shortcut feature - any ideas?
5
How do you add something to the Unity Launcher that only appears in the Dash? (Such as Chrome Web App Shortcuts)
0
How to remove duplicate Chrome profile entries in Gnome applications menu?
1
Open websites in new tab from launcher
4
Where are Google Chrome 'open as window' shortcuts stored?
0
Google Chrome - Open each profile's desktop file as a separate icon on launcher
1
Customze shortcuts of Chrome profile on the desktop (Ubuntu 20.04)